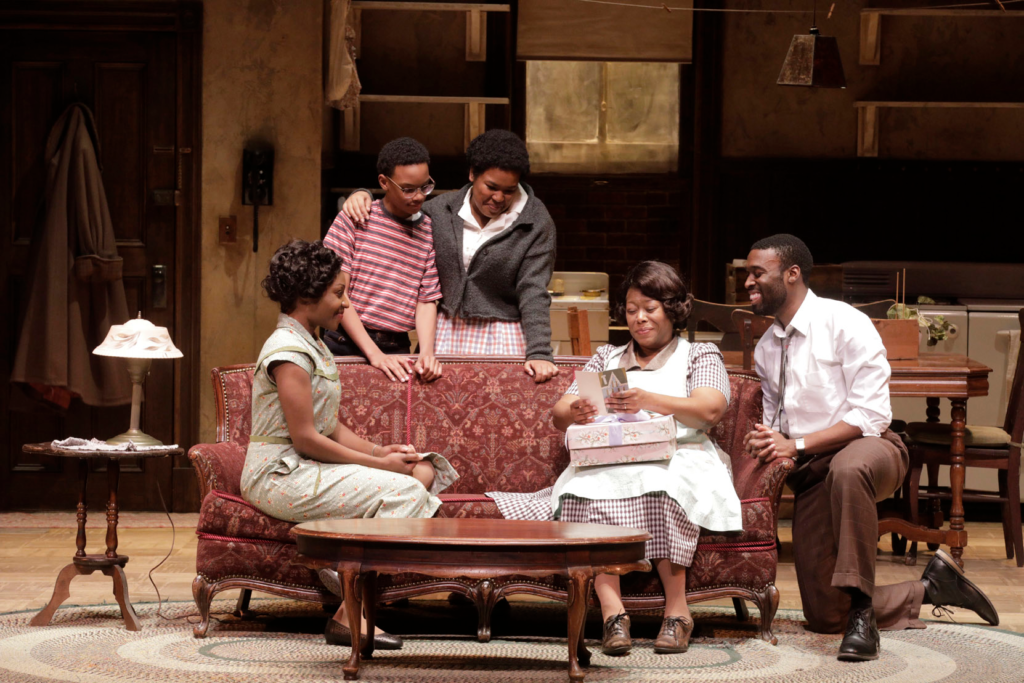 What happens to a dream deferred?

At the Kansas City Repertory Theatre, it metastasizes into an evening of compulsory theater.

It helps when the script in question is A Raisin in the Sun, Lorraine Hansberry’s 1959 magnum opus about the aspirations of a black family from Chicago’s South Side.

The play opens in a tidy but threadbare apartment in the Woodlawn neighborhood, where matriarch Lena Younger lives with her adult children and one grandchild. Lena is waiting on a $10,000 payout from her late husband’s insurance policy. Her children are waiting for her to decide how to use it.

For Lena’s son, Walter Lee, the insurance money represents his best shot at opening a liquor store — and, ultimately, becoming successful in the eyes of his son. For her daughter, Beneatha, the money means a chance to finish college and become a doctor. Lena’s daughter-in-law, Ruth, has a more modest dream: trading the roach-besieged, zero-bathroom apartment for a house of their own.

Scenic designer Antje Ellermann turns that apartment into a claustrophobic particle collider for the Youngers’ competing dreams. The set brims with signs of age: frayed rugs, faded furniture, clotheslines draped like streamers across the apartment. An upper-level façade allows occasional glimpses of other tenants, capturing the feel of a busy Chicago neighborhood without distracting audiences from the living room in front of them.

Jessica Jahn’s costumes are likewise impeccably detailed, evoking both the styles of the time and the tastes of each character. Her evening dresses and house clothes for Beneatha are especially sharp; tellingly, a mere parade of Raisin’s costumes would express the show’s major plot and character arcs.

But it’s the Rep’s cast — under the sensitive direction of Chip Miller and Marissa Wolf — that lends Hansberry’s script 21st-century staying power.

Greta Oglesby delivers an acting master class as matriarch Lena Younger. There’s a cold ferocity in her rule, yes, and an outmoded dismissal of climbing too high, but every blow and parry springs from a singular devotion to her family and its integrity. A terse religious confrontation between her and Beneatha (Brianna Woods, confident, comic and composed) provides a succinct demonstration of the family’s power dynamics (and Hansberry’s prescient sensitivity to generation gaps).

As Walter Lee, Tosin Morohunfola seethes with an impotent rage that bubbles to the surface as the play progresses. Morohunfola’s emotions smartly track Walter Lee’s sobriety: When he’s straight, he directs his stuttering frustrations inward, like an imploding star; when he’s drunk, he radiates his anger outward, unmoved by the casualties. That explosive performance doesn’t always leave Moronhufola room to grow — I’m thinking of a particular Act II moment when he’s asked to toe the edge of despair and then keep on walking — but the actor tempers his treatment with moments of tenderness and quiet desperation. A hopeful monologue delivered to his son, Travis (Carwin Cooper at the performance I attended), showed the actor at his finest, each line crystallizing into a vibrant image.

Ruth is the most pragmatic of the Youngers, and the part lacks some of the theatrical fireworks Hansberry lights for the rest of the clan. But Lanise Antoine Shelley is exceptional in the role, exerting quiet influence from her place within the family. Shelley’s celebratory whooping when she learns of the new house is joy incarnate, pure enough to bottle.

Hansberry crams multiple supporting roles into her single-interior drama, but each character represents a distinct path for black Americans in the Civil Rights era. Some, like Beneatha’s old beau George Murchison, internalize respectability politics — in essence, deferring their own dreams. Others, like her Nigerian suitor Joseph Asagai, seek a life wholly removed from the racial tensions nipping at urban American life. Miller and Wolf honor the importance of each role by staffing them with some of the city’s most talented actors.

For all its high stakes, Raisin is frequently funny. The script is replete with familial ribbing, as when Beneatha dons Yoruba garb and flails around the apartment to a recording of African drums. (“It’s a folk dance,” she tells her sister-in-law. “What kind of folks do that?” Ruth asks.)

Hansberry crafts a joke with the same care with which she renders a blistering political sermon. But the play’s legacy is its politics, which remain as relevant now as ever. Walter Lee’s climactic speech about the “takers” and the “tooken” still rings with depressing clarity — as does Lena’s retort about cherishing whatever scraps of humanity and dignity remain. “When do you think is the time to love somebody the most?” she asks her daughter. “When they done good and made things easy for everybody?”

Hansberry had — has — it right. But the Kansas City Repertory Theatre’s cast makes this production easy to love all the same.

A Raisin in the Sun