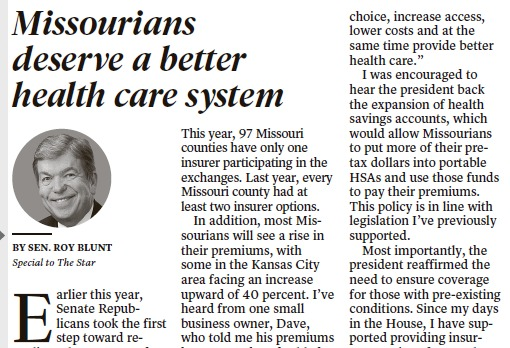 Last Friday, ProPublica called out U.S. Sen. Roy Blunt of Missouri for misleading a constituent about the Affordable Care Act. On Monday, The Kansas City Star‘s editorial page allowed Blunt to repeat some of the untruths.

Like most Republican-led discussions of health care, Blunt’s guest column contains more complaints about Obamacare than practical solutions. The current members of the Kansas delegation to the U.S. House delivered a similar message in an op-ed the Star ran in late January. (Opening line: “Obamacare has failed.”)

The Kansas Republicans promoted a “blueprint” for health care reform. Since then, details have emerged. The Congressional Budget Office says the House Republicans’ proposal to replace the Affordable Care Act, announced last week, may increase the uninsured population by about 24 million in 2026. Younger, healthier people will have more options. Older, sicker people stand to lose. The wealthy get a big tax cut.

But to read Blunt’s guest column you’d never know an Obamacare replacement was put forward, much less subjected to a devastating analysis. Instead, Blunt reiterates the commitment President Trump made in his speech to Congress to enact reforms that “expand choice, increase access, lower costs and at the same time provide better health care.” But the GOP health plan can’t keep that promise.

In addition to quoting Trump, Blunt’s column breezes past the fact that Obamacare created protections for preexisting conditions. Instead, Blunt takes credit for the popular provision, saying it’s an idea he’s supported since his days in the House. His op-ed also devotes a paragraph to a suspiciously anonymous small business owner, “Dave,” who complained to Blunt that Obamacare prevented him from providing decent health insurance. (“Dave” claimed he’s getting slammed with higher premiums and higher deductibles, which doesn’t correspond with employer surveys.)

The Star‘s editorial page has criticized Missouri Gov. Eric Greitens for staying in campaign mode since his inauguration. In keeping with that idea, the Star should have rejected Blunt’s op-ed on the grounds that the time for calling Obamacare a havoc wrecker ended at the election. Now we govern.

P.S. Blunt’s column was presented next to a defense of Obamacare written by a home health aide in St. Louis. Point-counterpoints survive, even after the newspaper chestnut was so wonderfully mocked in the humidifier-dehumidifier throwdown of 1996.