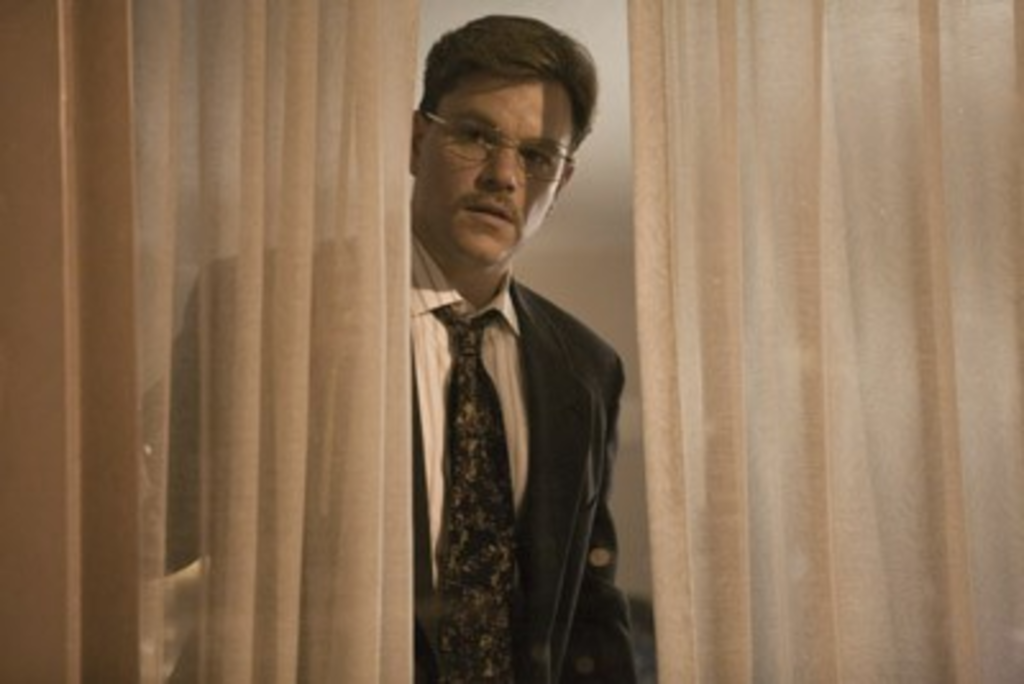 It’s a hell of a tricky thing turning real-life pulp into floss sugar, as evidenced by The Informant! The story of Mark Whitacre, the Archer Daniels Midland biochemist exec turned crooked federal snitch, is a tragicomedy. Journalist Kurt Eichenwald spent five years trailing the bipolar fuckup, and his 2000 book, The Informant, is so densely and richly packed with gut-wrenching what-the-what? revelations that it’s easy to speed through the 600-plus pages thinking it’s a novel. Which, for some reason, wasn’t good enough for writer Scott Z. Burns and director Steven Soderbergh, who frame their screen adaptation, The Informant!, between quotation marks so that they can giggle from a safe distance.

Their conceit is made clear with the film-opening caveat, which warns that, yes, while this may be a true story about Mark Whitacre — played here by Matt Damon, beneath 30 pounds of pudge and a toupee — some names have been changed, and some events have been collapsed, “so there.” And then, the irony hits fast and hard: the score by Marvin Hamlisch, offering a 1970s best-of; the flat, blindingly washed-out look shot in HD but borrowed from an episode of Dallas; the stunt casting of comics (Patton Oswalt, The Soup‘s Joel McHale, Paul F. Tompkins, the Smothers Brothers, Tony Hale, Rick Overton, Allan Havey) in dead-serious roles; title cards whose font went out of style with shag carpet and, um, Marvin Hamlisch. Soderbergh’s sure got a lot of gimmicks — the man’s working hard.

Unlike the director’s usual organic efforts, in which great style never yields overstylized results, The Informant! feels over-amped from start to shrugging finish. The filmmakers have painted a 1990s story with a 1970s palette, and the tone clashes with the setting, like plaid on paisley.

This is a shame because buried somewhere inside the bag of tricks is a thrilling, heartbreaking, breathtaking, darkly comic tale about a deluded hustler and crackpot liar who decided to bring down one of the world’s most powerful companies just to cover his greed, his ambition and his own sorry ass. Whitacre was a whistle-blower, absolutely, but also far from a hero.

In 1992, Whitacre was a golden boy at ADM with a big problem: His attempts to create an amino acid by feeding corn to microbes were failing, thanks to a virus in the vats. And so he blamed his troubles on corporate sabotage — from Japan, like in Michael Crichton’s Rising Sun, he’d often say — and wound up with the FBI tapping his home phone. Which led to his confession to the FBI that ADM officials were conspiring with competitors on a price-fixing scheme. Which led to his wearing a wire for three years. Which led to ADM’s discovery that he’d been embezzling millions. Which led to prison. For everyone.

In Soderbergh’s version, Whitacre is still the rising star who goes supernova all by his lonesome. But there’s no drama in his rise and fall, no tension, no nothing except the nonsensical narration that Whitacre provides with a rambling inner monologue (“Guys in suits buying girls’ used panties … “) that grows increasingly paranoid the more in trouble he becomes.

Truth is, Whitacre is fortunate to get off with the filmmakers and Damon’s glib, flabby, pasted-on-smile caricature. Same goes for the ADM higher-ups, often reduced to bit parts here. The other characters, chief among them FBI Special Agents Brian Shepard (Scott Bakula) and Robert Herndon (McHale), also get short shrift; it’ll take those who haven’t read the book forever to figure out who’s who, or why it’s worth the bother. Screenwriter Burns hasn’t condensed the book so much as cut and pasted, from Eichenwald’s tome, a few pages here and there; it’s less a narrative than a highlights reel. (During a preview screening, audience members were overheard asking neighbors, “Now, who’s that guy — an FBI agent or an Archer Daniels executive?”)

Whitacre’s tale certainly warrants an absurdist’s touch, but Soderbergh and Burns get mired in the middle ground somewhere between Michael Mann’s fist-shaking, heart-pounding The Insider (likewise a whistle-blower’s tune) and Steven Spielberg’s jazzy, light-on-its-feet Catch Me If You Can (with a brief stopover to hang out with the Barbarians at the Gate). What they wound up with: The Untalented, Bespectacled, Pudgy, Toupee-Wearing, Prevaricating, Kinda Nutty Mr. Whitacre. Now, who’s conning whom?