The Gang’s in Town 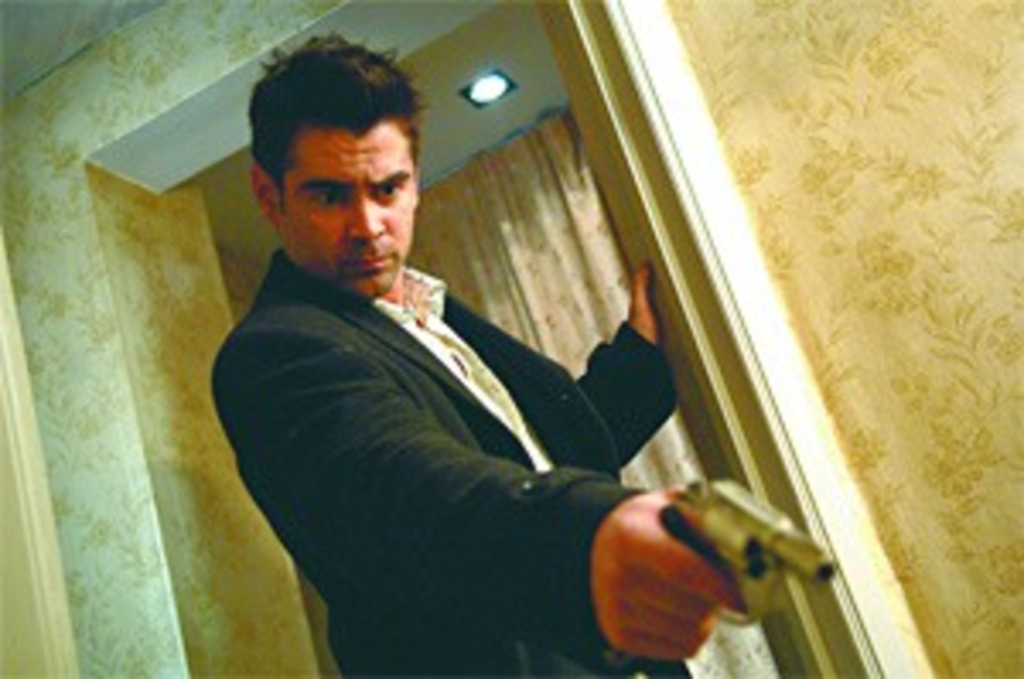 N o celebrity hairdresser should ever be allowed near Colin Farrell’s eyebrows with a tweezer. Black, fluffy and gloriously unilateral, they still aren’t the prettiest things about In Bruges. That honor falls to the Belgian city itself, known for its scenic medieval turrets, bourgeois tedium and unfavorable comparisons with Amsterdam. Bruges may be the movie’s rather too-long-running joke, but Farrell’s shaggy brow is easily the most entertaining thing in Irish playwright Martin McDonagh’s first foray into the crime caper.

Flying about the actor’s face like unhinged windshield wipers, knitting together in bovine puzzlement, lust or sorrow for sins of commission past, this hyperactive hair tells you all you need to know about Ray, a minor hit man forci­bly furloughed in Bruges with a much older colleague, Ken (Brendan Gleeson). Their boss, Harry — played by Ralph Fiennes with an appetite that suggests he’s enjoying his cockney break from the long-faced patrician depressives who have defined his career — has dispatched them to Bruges, ostensibly to lie low after a botched job in London. While Ken pores over guidebooks and pants his way up medieval towers, Ray, a pub-crawling lug who dismisses history as “a load of stuff that’s already happened,” keeps breaking away to put the moves on Chloë (Clémence Poésy), a Dutch nymph entrusted with furthering the movie’s surrealist ambitions by supplying hard drugs on the film set that Ray and Ken keep mysteriously running into. Of course, it’s the kind of film set that features angry dwarfs, fog machines and copious allusions to the Dutch painter Hieronymus Bosch. Fellini, ahoy!

Eager, perhaps, to reimburse us for Alexander, Farrell plays hapless to the hilt. But though he makes a charming counterpoint to Gleeson’s clapped-out gangster, the two work way too hard at a worn trope — the temperamentally incompatible odd mob couple who, in the relentless logic of the male buddy caper, are destined to become soul mates united by Catholic guilt for transgressions thoughtfully provided in colorful flashbacks. The ante is upped — though not by much — when a phone call from Harry (riddled with Mamet-like expletives) reveals that the true purpose of their jolly holiday is for Ken to whack the bungling Ray. In this charged scenario, what could follow but the flowering of a beautiful father-son bond, interrupted at pace-quickening intervals by pistol fire and bantering exchanges with hookers, Russian gunrunners and one very loquacious, vertically challenged thespian?

Tolerably well-crafted, In Bruges is also mighty pleased with itself, and not entirely without reason. McDonagh, whose 2003 play, The Pillowman, was the toast of Broadway, cranks out gabby monologues by the ream, and the movie’s modest charm lies mostly in the blarney that flies among these three mobsters as they posture, dicker and digress over what’s to happen next — and in all the blather about honor codes. But there’s something glib and derivative about this clever chatter, and for all McDonagh’s genuflections to Bosch, who never met an original sin he didn’t want to commit to canvas, both the look and the moral agenda of In Bruges suggest warmed-over Italian surrealism with a dash of early Scorsese.

All the proletarian poetry in the world can’t save this movie from its blurry mess of mixed motives. Its pretensions to moral inquiry are muddled, even fraudulent, implying that it’s OK to carry out a contract on a priest, but a chorister is a whole other ball of wax. The old-fashioned tenderness that warms Ray and Ken is continually undercut by rote reversions to blood and guts, heh-heh black comedy and a knowingness that brings to mind Susan Sontag’s remark that when you push irony too far, all that remains is a breathless laugh.

In the end, the movie succumbs to a self-defeating tonal clash between McDonagh the playwright, tipsy on wordplay and deep themes of sin, loyalty and redemption, and the hipster novice filmmaker dying to corner a lucrative movie market. In Bruges may have won McDonagh the opening night at Sundance and a sweet deal with Focus Features, but six months from now, this very minor pleasure will have about as much traction as the misty city in which it’s set.