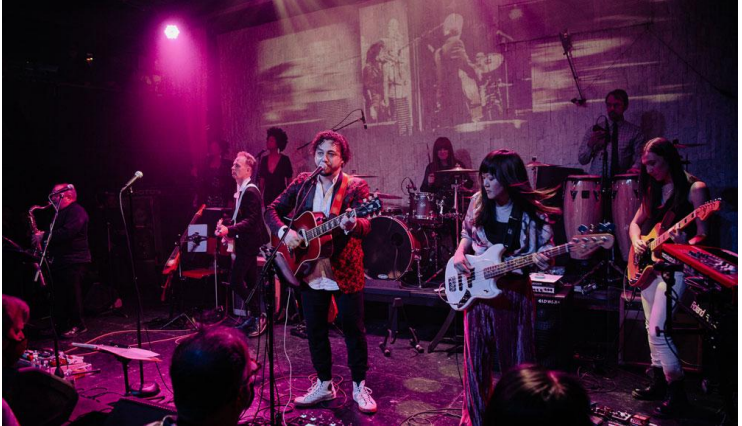 The Band That Fell To Earth perform a live tribute to Bowie. // Photo by Khitam Jabr

For the seventh year, The Band That Fell To Earth will present a multisensory production honoring the life and music of David Bowie. Bowie fans can catch the production at recordBar Jan. 19-21.

Each year, the band chooses a different local nonprofit organization to donate a portion of the event’s ticket sales. This year’s charity is KC Common Good, an organization breaking cycles of violence in Kansas City.

Originally intended as a one-time event to celebrate Bowie’s birthday and the release of his album Blackstar, the inaugural concert serendipitously coincided with the iconic artist’s untimely death in January 2016. In turn, an audience of more than 900 showed up for the first tribute show at the Uptown Theater.

The band realized there was a demand for an annual event honoring Bowie, so they committed to bringing the tribute show back every January. The historically sold-out two-night shows at recordBar have provided community outreach by commissioning local makers, partnering with local businesses, and raising thousands of dollars for nonprofit organizations. Equally important, the shows provide a space for Bowie fans to gather and share their love for the groundbreaking artist’s work.

The band’s bassist, Michelle Bacon, is proud of the community the annual Bowie tribute shows have created. Bacon says, “Bowie’s music transcends generations, genres, and everything. I firmly believe anybody can find a Bowie phase they like because it’s such a variety.”

According to Bacon, the variety of Bowie’s music is reflected in the variety among the audience members the band’s annual tribute shows attract. Bacon says, “Something that unites most of us in the band is having this sense of not belonging. We’re finding this sort of beacon where we do belong. We’re all aliens. We’re all misfits.” She says Bowie’s idea of “the alien” is something many fans relate to.

Bacon believes The Band That Fell To Earth’s audience is comprised of both long-standing Bowie fans and friends of fans who are exposed to Bowie’s music for the first time at the tribute show, so music fans at any stage in their discovery of Bowie’s music should feel welcome. Many attendees also wear costumes or their Bowie-inspired best.

The production is an equally important part of the experience as the live music. “The projections, by XO Blackwater, provide another element to the multisensory experience, showing Bowie through the various phases of his career. It really helps create the mood of each show,” says Bacon.

An impressive 13 band members comprise The Band That Fell to Earth, and each night of the show will feature a different guest vocalist from the Kansas City music scene. Band members include members of local acts such as Frogpond, Katy Guillen and The Drive, Season To Risk, Hi-Lux, and more.

The Thursday, Jan. 19 concert is a VIP event honoring the 50th anniversary of Bowie’s iconic album The Rise and Fall of Ziggy Stardust & the Spiders From Mars, with special guest vocalist Calvin Arsenia. Bacon calls Ziggy Stardust “the quintessential concept album,” and Arsenia’s smooth vocals, stunning musical sensibility, and glam aesthetic are sure to do the album justice. Tickets are $50, and the capacity is limited to 150 people.