How Calvin Arsenia left the church and found his musical calling 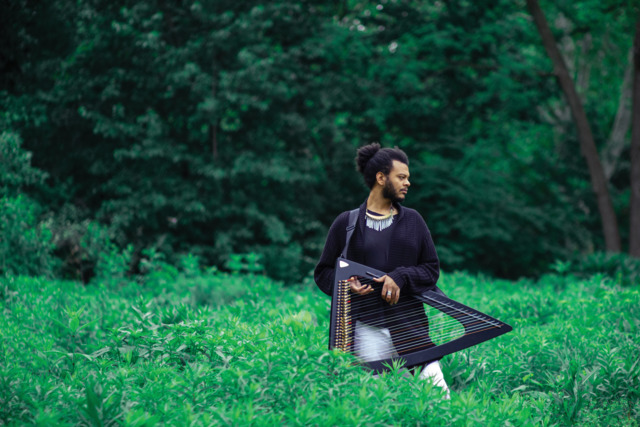 A deep, melancholy voice embellished by the shimmering harmonies of a harp swells inside a packed RecordBar. The audience is still, eyes on the stage. Alone, with red velvet curtains draped behind him, Calvin Arsenia wears a brushed golden crown, cuffs, a cascading necklace, and an architectural metal collar stretching out to his shoulders. He’s 6 feet, 6 inches tall. When the light hits just right, he looks like a Caravaggio portrait that’s stepped off the canvas.

“I’ve performed this song in multiple different countries, and I’m always afraid to sing it, every single time,” Arsenia confesses, towering before us. “But I think there is something very special in doing something that scares you, that ignites feelings inside of you.”

With a stomp and a clap, Arsenia leans into an acapella version of “Tip Toe,” a rhythmic, bouncy track from his latest album, Cantaloupe. Eyes clamped shut, he sings the opening lyrics: There are parts of this town / That I have to avoid / So I tiptoe around / I don’t wanna make noise. Slowly, the room joins in, one enthused audience member after another, inspired by Arsenia’s vulnerability to overcome their own reserve.

Depending on how he wants you to feel in the moment, Arsenia has a range of modes: medieval minstrel, debauched queen, high priest, glittery nymph. As such, it’s difficult for anyone, including his record label, to say exactly what he is. His songs have catchy pop choruses (he recently released a brilliant cover of Britney Spears’ “Toxic”) but none of the tidy, packaged sheen you’ll find on the Hot 100. His vocal style sits somewhere between opera and soul, but his records veer from electronic to jazz to indie-acoustic. Everything about Arsenia is curated for your experience, different on any given night. The set list, stage, props, and makeup — it’s all highly calibrated to make you feel. And he’s good at making you feel.

Arsenia has a complex story to match his complex art. He was born in Orlando and raised in Olathe but describes his life in two distinct phases: pre- and post-Scotland. In the former, he was a worship leader at a local church and staff member at the International House of Prayer, the Grandview church known for its 24-7 worship room and absolutist end-of-the-world theology. Laughing, Arsenia tells me he wanted to spend the rest of his life “growing worship teams, starting prayer meetings, leading communities of fasting, and ushering in the second coming of Jesus.” I laugh with him. He’s speaking my language — a million years ago, in a distant past, I came to Kansas City for IHOP-KC’s Bible school.

Everything changed in 2012, when Arsenia moved to Edinburgh to work as a liaison between a church community and that city’s art scene. He performed at Fringe festivals and made new, often-non-Christian friends. And he found an audience for his classical voice and exuberant style — some- thing he’d never been able to find back in the Midwest.

“I got to sing acapella songs in rooms full of old Scottish guys, and they would be silent the whole time,” Arsenia says. “And I learned over time that it wasn’t my technique that was reaching people, it was my vulnerability. To use language that you and I are familiar with, it was the ‘posture of my heart’ that really connected with people.” I smile again at the nod to our shared past in the weird vortex of IHOP-KC. 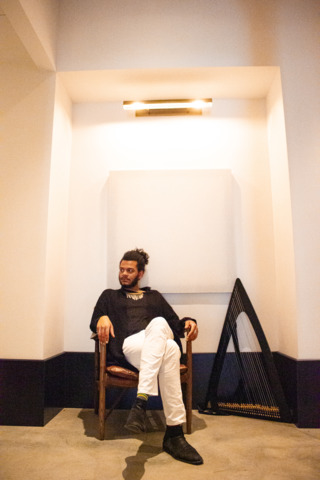 Arsenia is gay, which the doctrine we subscribed to during our House of Prayer days is decidedly, and notoriously, prohibitive of. Scotland changed this for him, too. Arsenia says that, one day, he was walking and praying, depressed at having to carry “this burden of same-sex attraction,” when he had a revelation.

“Jesus said, ‘The truth will set you free.’ And the truth is that I’m attracted to men,” he says. “And I said to God, you know, ‘I’m not going to hide this from you anymore. Whatever you want to do about it, that’s fine, but until then, this is me.’ And I felt this lifting, this weight lifted off my shoulders.”

I ask Arsenia about “Equally,” a track from Cantaloupe that, for me, set off distant echoes of songs I used to sing about Christ. His hands were equally skilled, the song goes, But the power is revealed / In the presence of his perfect lips. The blending of tactile, borderline sexual language with spirituality and soft melodies is a hallmark of IHOP’s original worship songs, part of its allure to thousands of passionate young adults. I felt those same spiritual emotions as I listened to Arsenia’s song, though its effect on me wasn’t one that IHOP would condone. Carnal, if we’re keeping things biblical.

“Equally,” Arsenia says, is the first song he performed publicly that used the pronoun he. It was a few years after he’d re- turned from Scotland, by which time he’d drifted away from the Christian community.

“The song was inspired by a lover that I had, and it kind of morphed and shifted,” he says. “For me now, that song is all about masculine sexuality, but not romanticism — the non-romantic, kind of very visceral, sexual passion.”

Arsenia says he’s on a quest to reproduce the transcendence, emotional vulnerability, and euphoria of the charismatic church in his own performances — IHOP, minus the guilt-inducing Christian theology. He quotes a song by IHOP darling Misty Edwards: Arms wide open, a heart exposed. Again, I’m all too familiar — I once belted out those lyrics alongside Edwards onstage at IHOP’s Onething conference. But where she’s talking about Jesus, Arsenia’s talking about himself.

In 2014, Arsenia’s British visa expired, spurring a move back to Kansas City. He gradually found his footing in the arts com- munity here. Around 2016, Arsenia began producing what he calls “five-sensory” shows in Kansas City, with caterers, massage therapists, dancers, stilt walkers, smoke, and incense. He performs regularly with the immersive, avant-garde cirque nouveau collective Quixotic. (At the Nelson Atkins Muse- um of Art’s Party Arty this year, he joined the group dressed as Marie Antoinette.) After having met Arsenia just once, Peregrine Honig, a longtime Kansas City artist and curator who runs the Greenwood Social Hall, hosted Arsenia’s first live recording in 2017. Every aspect of the room and performance was curated, from Julep’s saffron cocktails to the incense, rose petals, and borrowed saris that covered the chairs. Arsenia is a “classic beauty,” Honig says, and an artist she hopes to work with for the rest of her life.

I heard similar words of adoration and admiration from many others who’ve worked with Arsenia. For Patrick Sprehe, who saw Arsenia perform for the first time at Greenwood Social Hall, Arsenia was the “chosen one.” Sprehe, an English teacher, and James Andrews, an heir to Andrews McMeel Publishing, had been dreaming of starting a record label; the idea was to find important local artists and give them sub- stantial resources that could boost their signal beyond Kansas City.

Arsenia was exactly what they were looking for. In February 2018, they drew up a contract, and Arsenia became the first artist signed to Center Cut Records. The newborn label, personally funded by Sprehe and Andrews, invested heavily in Cantaloupe, producing gorgeous music videos, printing vinyl, the whole deal.

“Those things cost money,” Sprehe says. “But we also realized that with someone like Calvin, that’s what it’s going to take to get him to the next level.” 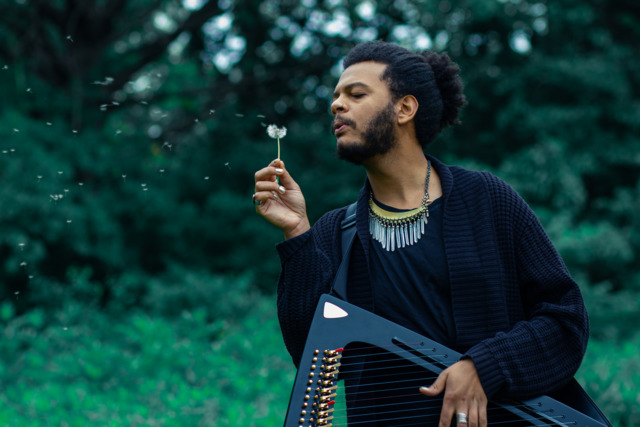 The music industry today, though, requires more from artists than a strong album and a buzzy video. Center Cut has jumped between three PR firms since launching, and promoting someone as metamorphic as Arsenia, who rides the line between concert artist and immersive theatre experience, can be deeply complicated.

“He’s so versatile, he’s kind of a marketing challenge for us,” Sprehe says. “When they ask us, you know, what’s his genre — we have to sort these things out for Spotify — I’m like, ‘I don’t know.’ Could be R&B, could be electronic. He could be singer-songwriter. I mean, I’ve seen him do punk.”

Given his obvious talents, it can seem inevitable that Arsenia will eventually transition from relatively hidden KC gem to national touring headliner. But that doesn’t mean it is inevitable. Center Cut has a noble vision, and money, but limited experience. And the dynamics of publicity, now fueled largely by social media, change so fast that even established music industry pros have a hard time keeping up. Ultimately, though, the solution to the label’s most pressing goal — to get more people in the room at Arsenia’s shows — is analog: find him a supporting slot on tour with a bigger artist. But even that could be tricky.

“He really likes those kinds of shows where he has a lot of free rein and can kind of control everyone’s experience from beginning to end,” says J. Ashley Miller, who produced, mixed, and collaborated on Cantaloupe at his local studio, Infoaming Vertex, and co-wrote “Headlights,” one of Arsenia’s singles. “But it’s a real logistical challenge sometimes to get all the right people in the same room and all the resources for those sort of larger visionary pieces.”

Then again, Arsenia says that it’s never been all about succeeding in the industry. “I’m not looking for likes and stats and numbers, or even album sales necessarily,” he says. “I’m looking to encounter people where they are and encourage them.”

He wants to keep touring the US, and he wants to find a bigger act to support. But he has plenty to keep him busy and fulfilled. Arsenia and Miller are currently working on a club remix of Cantaloupe, and this month Arsenia headlined the Transfiguration Festival at Quixotic and the West 18th Street Fashion Show. He’ll also perform at San Francisco Pride in late June. And he says to expect a new album later this year, too.

“I want to be a part of people seeing their fullest self,” Arsenia says. “Whatever that looks like, I want to do that.” Spoken like a true pastor — just an infinitely more accepting one.