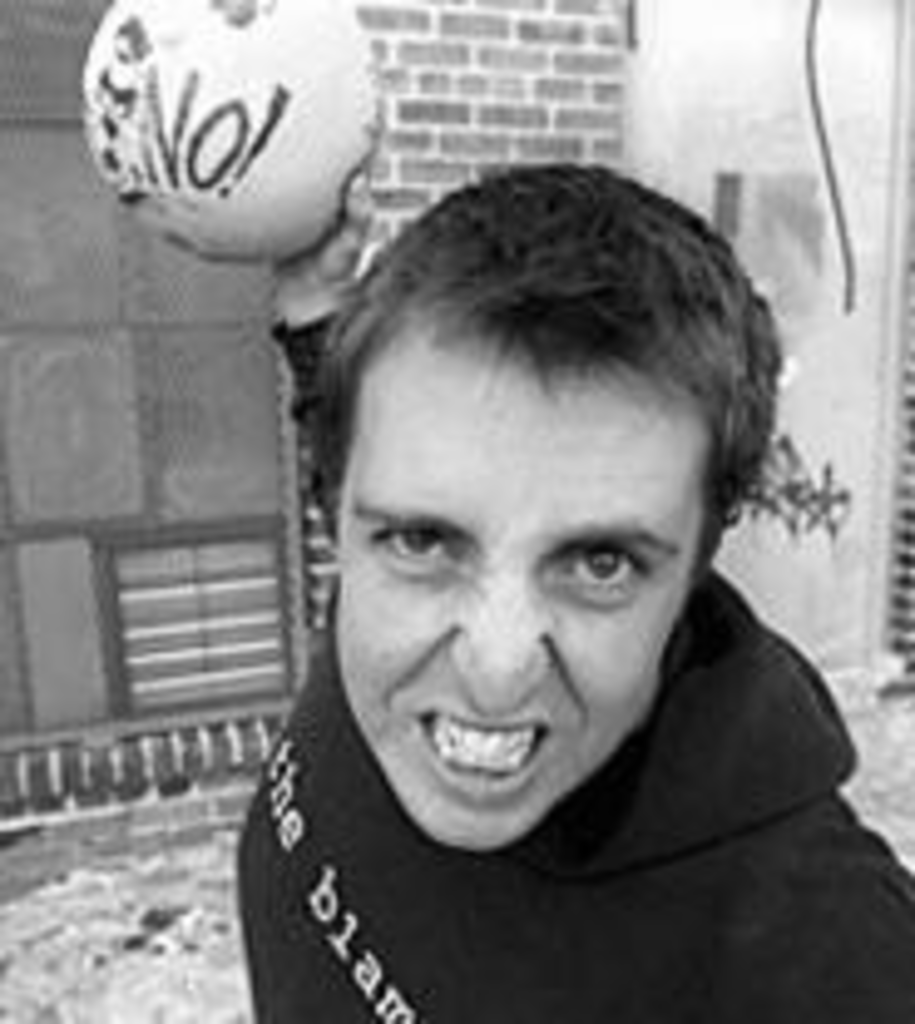 John Raux points to the windowless buildings that surround the downtown parking lot just south of 18th Street and Wyandotte. “There’s no glass,” he proudly explains. “So no breaking, either.” That makes it a perfect setting for a monthly dodgeball game.

Raux owns the tiny art gallery known as the Forum, located around the corner from the parking lot. Not many art-gallery owners organize athletic events, but Raux isn’t a typical gallery owner. His shows change constantly because he allows the artists to continue submitting new work throughout the show. Since it opened in May, the Forum has provided visitors with the chance to participate by drawing on paper-covered walls or decorating Post-it Notes. And for two years, he’s been offering Kansas Citians alternatives to boredom in his Footballzine (folded like those football-shaped notes that seventh-graders pass during math). Dodgeball originated as just another of Raux’s antidotes to complete ennui.

“I don’t like people who make excuses,” he says. “I’m constantly trying to think of things to do, cures for boredom. Granted, dodgeball isn’t an art activity, although there is music, so it’s sort of a music activity.”

Punk bands play outside during the games. The Arts Incubator, just west of the parking lot, provides power for amps and mics, and musicians race through driving instrumentals with crazed vocals, bringing out the sharpest competitive edge in each dodgeball player. This month’s musical lineup includes Anne Hutchinson, Dispensing False Halos and Flattery Leads to Ruins. Raux sticks with indie and punk bands because the one time he booked a glam outfit, the people who came to hear the music didn’t want to play ball. “They’d worked too hard on their hair,” he says.

Dodgeball competitors play bombardment style. For anyone who doesn’t remember the phys-ed definition of bombardment style, all the balls are set up on the line dividing the two sides. When the game begins, everyone runs to pick up balls and rushes to hit their opponents with them. In Raux’s version of the game, however, people who get hit are not out; they just switch sides. “It’s not so team-oriented,” he explains. “It’s just pure adrenaline.”

Originally, Raux wasn’t sure how dodgeball would go over as a counterculture pastime, but he didn’t let that stop him. “You’ve just got to try it out and see. If it doesn’t work, you try something else.”

That’s pretty much his modus operandi for everything. At the end of this month’s game, Raux will let two photographers put on a slide show. He’s never met the photographers. He hasn’t seen their work. He doesn’t know their names. Still, he figures he ought to give them a shot.

“One of the great things art school taught me was how to embrace making a mark or making a mistake,” Raux says. “It does have to do with inhibitions, I guess. I hold back a lot less these days.”