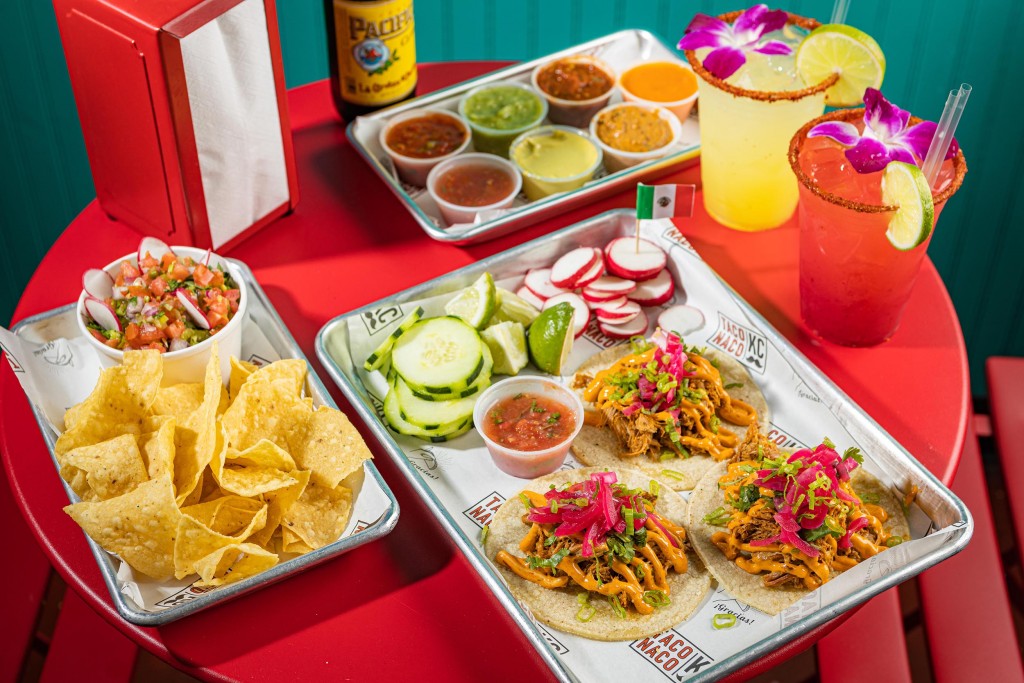 Are we ready for pandemic silver linings yet? I’ve got one in the chamber: Kansas City’s contrived (but deserved) renaissance as a Taco Town.

Locals have been grazing at the taquerias lining Southwest Boulevard for decades, but last year, the city of Kansas City, Kansas shrewdly branded them as a “taco trail.” Yoli Tortilleria opened a new retail shop on the Westside and has kept its front yard reliably busy with innovative pop-ups from taco-slinging chefs. A Brooklyn-based freelancer proclaimed KC the “true taco capital of the United States” in Forbes (for suspicious journalistic reasons), and Texas got mad about it (for predictable ones). Torchy’s Tacos, a popular Austin-based chain, entered the metro market. Chef J BBQ started selling enviable brisket and barbacoa tacos in the West Bottoms. In-A-Tub is … still around.

Much to be thankful for.

This is fine. Good, actually.

There was a time in my life when I bought into the myth that “authentic” tacos had to be simple and cheap and served in Styrofoam—a viewpoint that pins Mexican cuisine in place with dated street-food stereotypes and resigns all of us to rubbery tortillas made from commodity corn.

The sub-$2 taco still has a place in my heart (and on my lunch plate). But I’m more aware these days of the sacrifices taquerias make to keep costs down and more skeptical about why some cuisines and categories of food get to be “elevated” while others stay pigeonholed as “cheap.”

We’re a taco capital now—we have room for all kinds. Plus, in the end, “Is this authentic?” just isn’t a very interesting question. I recommend: “Is this any good?” 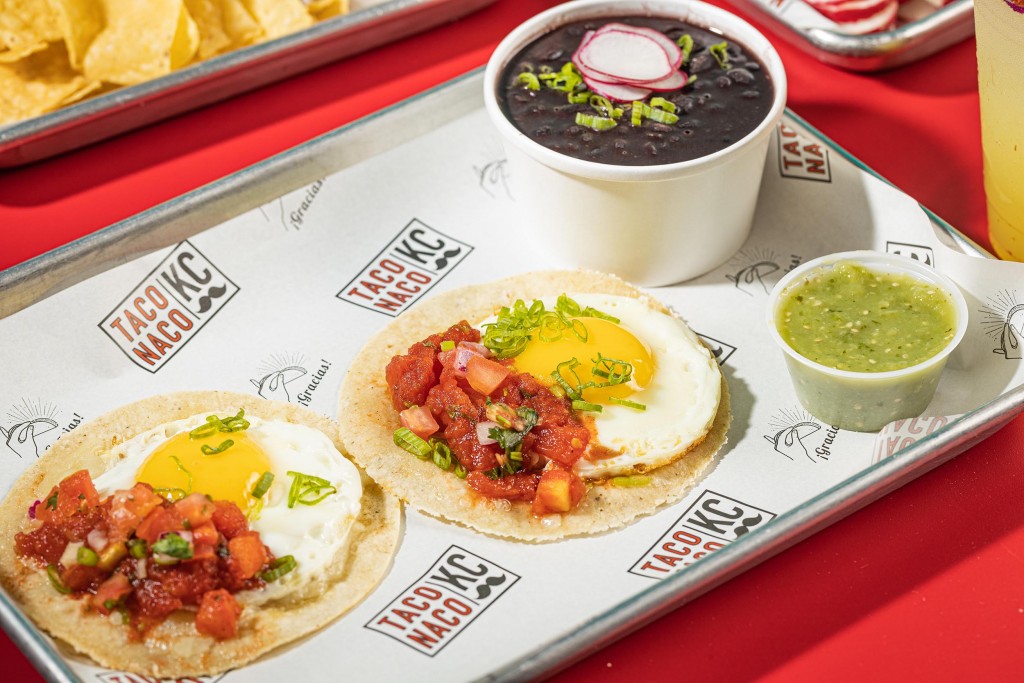 The salsa and egg tacos and black beans at Taco Naco. // Photo by Zach Bauman

It’s hard to blame chef Fernanda Reyes and her husband and co-owner, Brian Goldman, for listening to the locals. Although the pair took on intermittent catering jobs and pop-ups in 2019, they found success in 2020 once they began selling their tacos (and later, their margarita mixes and meal kits) at the Overland Park Farmers’ Market.

The pair opened the brick-and-mortar Naco in a stripmall at 82nd and Metcalf this January, and the taqueria and market have been reliably busy since (don’t worry; the line moves fast, as do the line cooks). The space is suffused with light-hearted touches and cartoon colors, from salmon and azure accent walls to an altar of snake plants to cute cucumber garnishes stabbed with Mexican flag toothpicks.

All tacos here use Yoli corn tortillas, which are excellent, and all of them are $3.75 (except on Tuesdays, when they’re three for $9). The best pork option is the cochinita pibil, which features pork shoulder marinated in a blend of annatto paste and bitter orange, and slow-cooked in banana leaves. 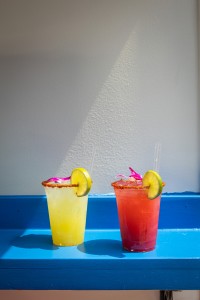 The house margaritas at Taco Naco. // Photo by Zach Bauman

The shredded pork in my taco was tender and moist—and flavorful enough that I didn’t need the heavy-handed drizzle of chipotle aioli. I preferred that aioli on the brisket barbacoa, where it added a velvety richness to the lean meat (balanced by tangy pickled onions). I wanted to love the mushroom mole taco (one of two vegan options here). But the mole tasted flat, adding only a slight sweetness to the earthy mushrooms. For now, I’ll stick with the meats.

If you want to dawdle here, order a king-sized margarita, which the restaurant serves in a plastic pint cup with a lipstick rim of Tajin and chamoy. The classic lime margarita ($9; $5 at happy hour) tasted fresh, with the right balance of tart to sweet. You can have a fine time just sipping one on the sunny patio and grazing on a quarter-sheet pan of Taco Naco’s fresh tortilla chips. Every order of guacamole or salsa arrives with enough chips to get a small bear through hibernation.

The six-salsa sampler ($5) is a good way to try them all, but the restaurant also sells 8-ounce cups of individual sauces. If you go that route, I recommend the creamy jalapeno (an avocado-cool contradiction with a snaking, sneaking heat) or the tomatillo (AstroTurf-green; vegetal and mild).

Reyes tells me she used to make her salsa macha the traditional Veracruzana way—less blended sauce than chile oil, with a sediment layer of ground peanuts and chiles de arbol. When that version didn’t sell, she started using peanut butter (and blending it). “Some people—and more here in Overland Park—they don’t like to see a lot of oil.” That’s a shame, because the version I tried tasted uncannily like roasted veggie cream cheese.

Customer preferences dictated the Tex-Mex salsa as well—the only one of the restaurant’s salsas to use canned tomatoes, and the only one mild enough for a goldfish to swim in. “That one we just do because everyone says, ‘I want my regular ketchup-flavored salsa.’” Reyes laughs. “I don’t know how to say ‘no’ to my customers.”

Reyes has good culinary instincts, and Taco Naco is likely to keep improving as she and Goldman refine where to adapt and where to stick to their guns/guts. For now, the restaurant is already a mood-lifting place to eat and shop, with tacos worth the drive for urban core-dwellers. 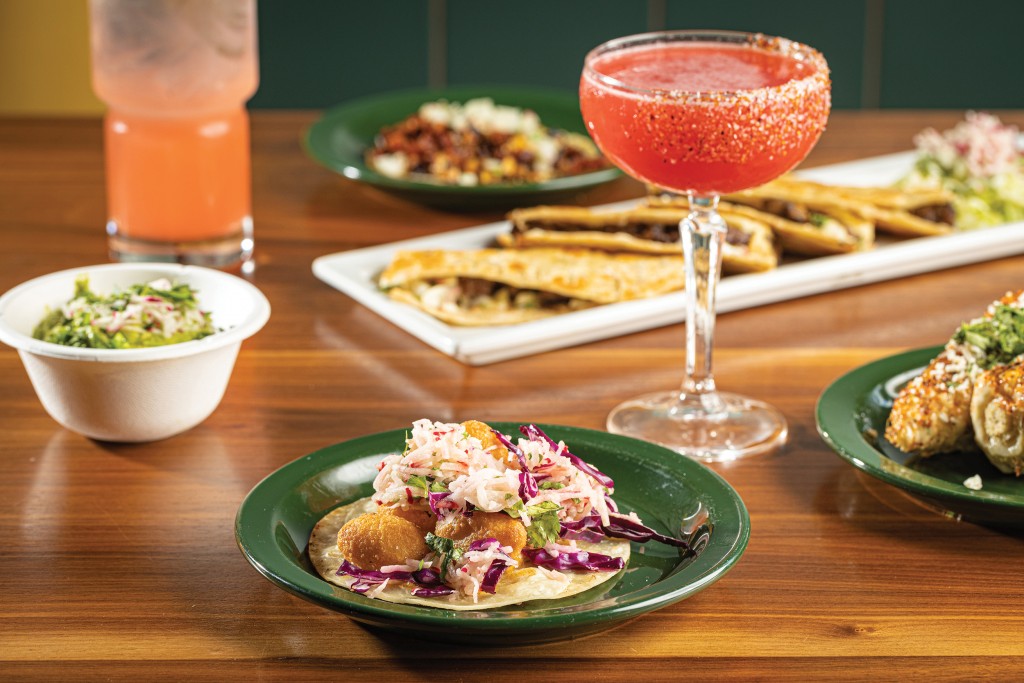 South of Summit has had plenty of time to get its feet under it—the Waldo hangout opened in February 2020 next to sister restaurant Summit Grill. But the tacos here suggest the kitchen is still working out some kinks.

The menu—developed by restaurateurs Andy Lock, Domhnall Molloy, and Po Wang—has a small selection of entrées (burritos, taco salads), but tacos are the main focus. When South of Summit first opened, it advertised “made-from-scratch” corn tortillas, but the restaurant has since switched to using Yoli corn tortillas (soon, all of Kansas City will be made from Yoli masa). I’ve probably eaten hundreds of tacos on Yoli tortillas at this point and they almost never blow out their bottoms. Here, four different tacos split open on me.

Part of the problem is that nearly every taco was so overloaded, they looked more like floppy tostadas. The barbacoa taco ($3.50) was piled with a sandwich portion of slow-roasted beef that tasted dry despite being sogged with broth. The al pastor taco ($3.25)—here, pork cooked on a spit grill—had a mountain of tough meat dripping with annatto-red oil. The marinated pineapple added a brisk acidity, but the pork tasted bland on its own. And the chicken tinga taco ($3), a bargain for size queens, was nearly impossible to eat without a knife and fork. 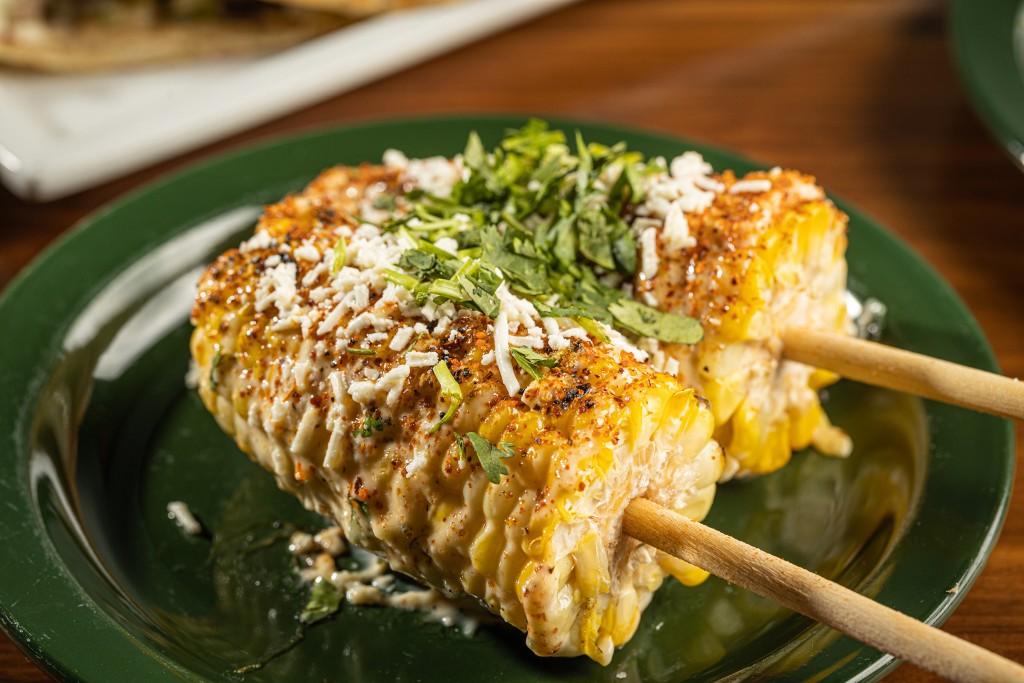 The elote at South of Summit. // Photo by Zach Bauman

I had better luck with the fried cheese curd taco ($3.75). The curds were a prepared product—South of Summit doesn’t bread them in-house—but they were crisply fried and chastely topped with a creamy-spicy jicama slaw. And the chorizo verde ($3.25) was my favorite of the tacos I tried. The housemade salsa verde brought a wash of gentle heat to the even blend of chorizo, crisp potatoes, and small-curd scrambled eggs.

The cramped, ocean-blue dining room is energetic at best and frenetic at worst, with an open kitchen and galley orientation that crowds the entryway with bodies at peak times. The small courtyard between the taqueria and Summit Grill is a quieter place to sit and snack on chips and dip.

Granted, the salsa roja that comes with the pre-meal basket of chips is about as spicy as a recorder concert (Taco Naco should send their ketchup fans here). But the guacamole ($7.75; half-price at happy hour) is well seasoned, with hefty chunks of avocado and a spicy snap from sliced serranos.

South of Summit has good ideas—and good ingredients—but the execution isn’t quite there. I’ll return if they dial back their fillings (and dial up their flavors). 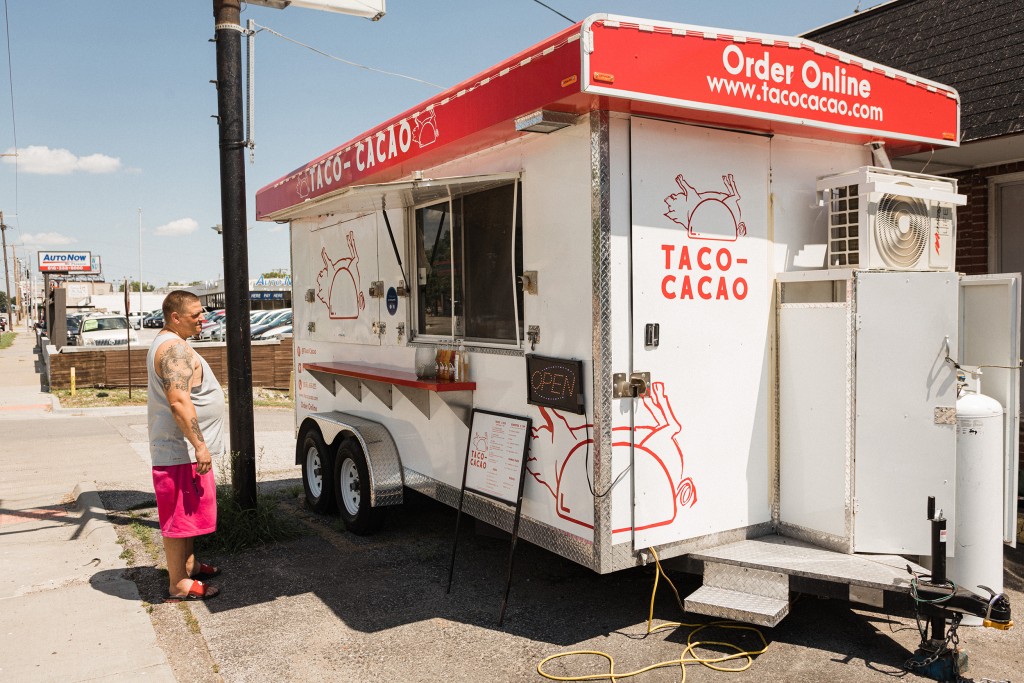 When Cacao Restaurante co-owner Alfonso Esqueda opened Taco Cacao this January, it felt like a Hail Mary. “With COVID, we were this close to closing the restaurant,” he tells me. “We had to do something different to survive.”

“Something different” meant something casual—a small taco truck with online ordering and a semi-permanent residence at 79th and Wornall. If the line outside the trailer on weeknights is any indication, Esqueda and Cacao are going to make it.

The tacos here are small and simple, with minimal adornments to let the meats shine. They do. The red pork cochinita taco ($2.25) is compulsory: The rosy chunks of pork were slightly grassy from a slow steaming in banana leaves and soft enough to threaten known states of matter. The cubes of steak in the asada taco ($2.25) were tender and spice-crusted, rounded out with a few slices of grilled onion and a sprinkling of cilantro.

Most of the tacos are served on two corn tortillas—locally made, Esqueda tells me, though he’s cagy about the supplier. The double-stack treatment is ostensibly to help the tacos travel well: Though Taco Cacao has a small picnic table, most diners take their orders to-go. I’m not sure Cacao needs the taco insurance. I transported a family pack of tacos for 20 minutes, and the fillings never breached the first layer. 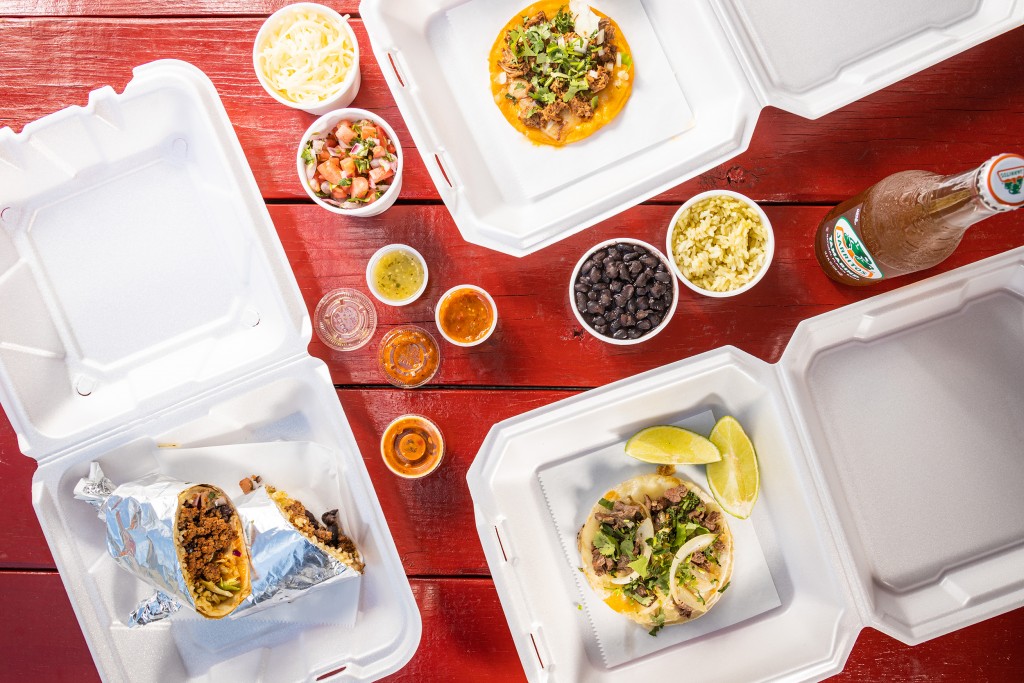 The only single-ply taco is the birria ($2.25): tender, fatty morsels of beef nestled on a single corn tortilla burnished with consommé to a turmeric-gold. Even with the consommé, the taco held its shape; if you can tear yourself away from the cochinita, this is a solid second choice.

Larger appetites may prefer the burritos ($6.99), which I sliced like sushi to share with friends in an act of Midwestern violence. The burritos are packed with meat, beans, rice, and chipotle mayo, and bronzed on a flat top to give them a little extra flavor and structure. They’re tidy enough to eat one-handed while driving if you can’t wait until you get home.

Esqueda recently opened a second trailer at 75th and State Line and fitted it with a trompo for pork al pastor. Right now, he’s mostly renting it out for events and private parties, but it may join the permanent fleet if demand stays high. I suspect it will: Taco Cacao may be the most consistent taco spot to open this year.