Taco Bell Cantina welcomes Westport to the Hoobastank of nightclubs 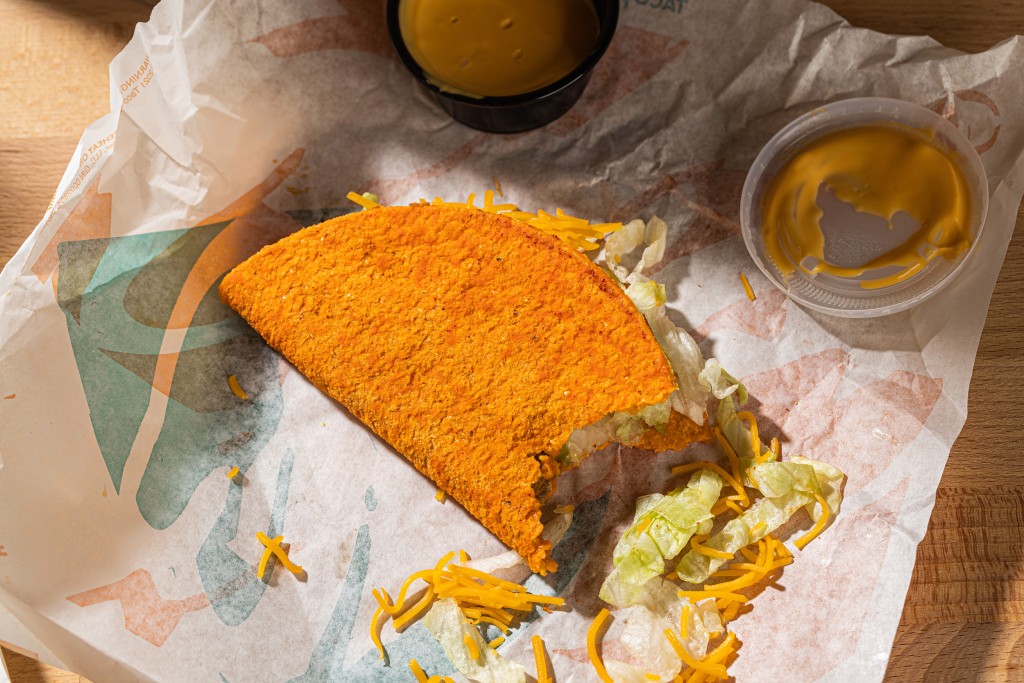 In the abstract, there is nothing much wrong with the Taco Bell Cantina.

Diversified Restaurant Group (DRG) opened the metro’s first edition of the popular Taco Bell spin-off this March with a clear value proposition: in addition to the standard Taco Bell menu, the Cantina would serve beer, wine, and alcoholic slushies.

It would serve them until 3 a.m. every night of the week. It would not have a drive-through, because its upscale, clubby environment would encourage diners to linger. If Starbucks had reinvented the “third place,” the Taco Bell Cantina would represent the fourth—a place where every meal could be FourthMeal.

As always, it’s in the concrete particulars where things go off the rails.

Start with the location—the new Westley luxury apartment building at the corner of Westport and Broadway—which made the Cantina an instant flashpoint for debates about the changing character of Westport.

It’s true that there’s not much “old” left in “Old Westport” these days. The Westley building is like every other “luxury apartment” complex constructed in the past five years, which is to say: ugly and named after a rich woman’s dog.

The neighborhood has become a revolving door of hyper-specialized restaurants accelerated by encroaching regional (and national) chains, but I doubt we’ll ever stop eulogizing the Westport That Was. Sixty years from now, my robot grandchildren will be bitching about how the neighborhood used to be cool, and they will be talking about Johnny Kaw’s.

My (seasoned) beef with the Taco Bell Cantina isn’t really about real estate. It’s that it’s just not much fun. 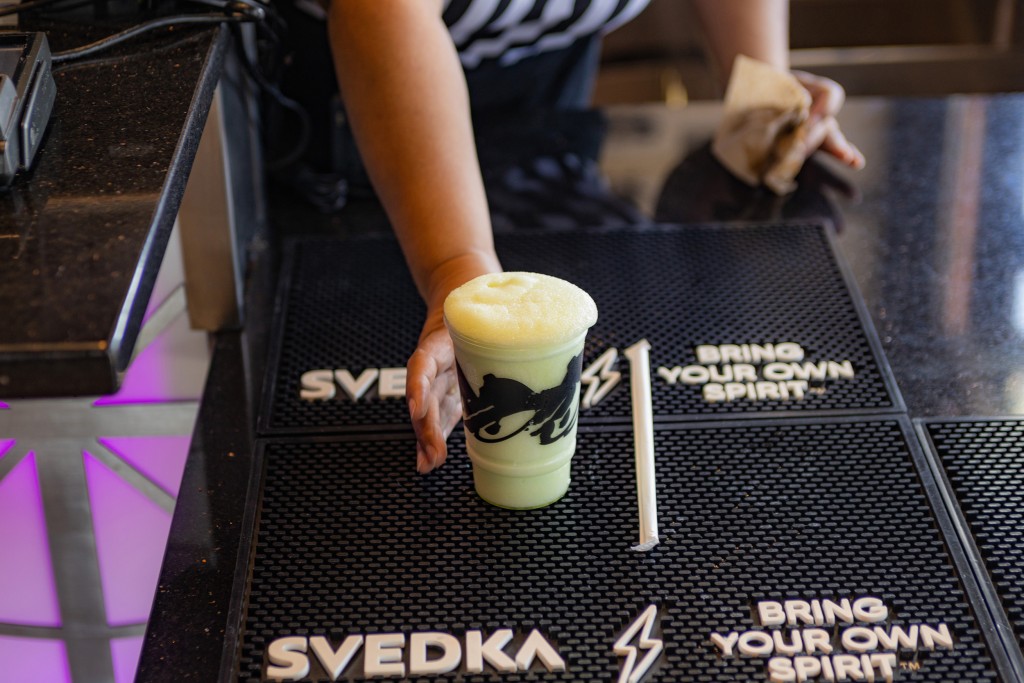 The frozen drinks ($3.69; $8 with alcohol) come closest to delivering on the restaurant’s promise. Right now, the Cantina serves only two flavors of Twisted Freeze—Baja Blast and Margarita—but a Beach Berry Sangria machine is on the way.

You can order either of the flavors with rum, tequila, or vodka, and they’re both pretty good; sweet, but not cloying. The worst thing about them is the color, which is designed to look good in a single state of matter. As my margarita slush melted, it transformed from a pleasant pale green to an unsettlingly saturated olive drab.

Unfortunately, the restaurant isn’t a very welcoming place to drink them. The Cantina is loosely sports-themed, which means the bartenders are dressed like referees and the restaurant is lit up like a stadium. Cold LED screens—TVs, electronic menus, self-serve ordering kiosks—are tucked in every corner.

The VIP booths, which any plebeian can sit in, are decorated with murals of football and baseball players that gesture toward the Royals and the Chiefs in Legally Distinct colors. Although designed by Taco Bell corporate, the murals were hand-painted by local artists Whitney Kerr, Mike Trujillo, Quinn Vraspier, and Chase Hunter.

DRG Area Coach Sean McGuire tells me you can pay to reserve one of those VIP booths if you call ahead; you can even order bottle service. But does anyone really want to play nightclub at a fast food restaurant with worse mood lighting than the dressing room at Kohl’s?

For all its modern touches, the Cantina seems designed to appeal to the cultural and political sensibilities of someone who entered a cryogenic chamber in 2005 and has only just woken up. On any given night, the dining room speakers might blare Hoobastank, Chris Brown, or Smash Mouth.

The bar serves glitter shots on the weekends and advertised Irish Car Bombs for St. Patrick’s Day, unaware (or perhaps just unbothered) by the international controversy around the name, which gestures far too uncomfortably to the Troubles.

The Cantina’s grand opening was “après-ski themed.” I don’t know what that means, either. The food, of course, is exactly what you’d expect: it’s Taco Bell. 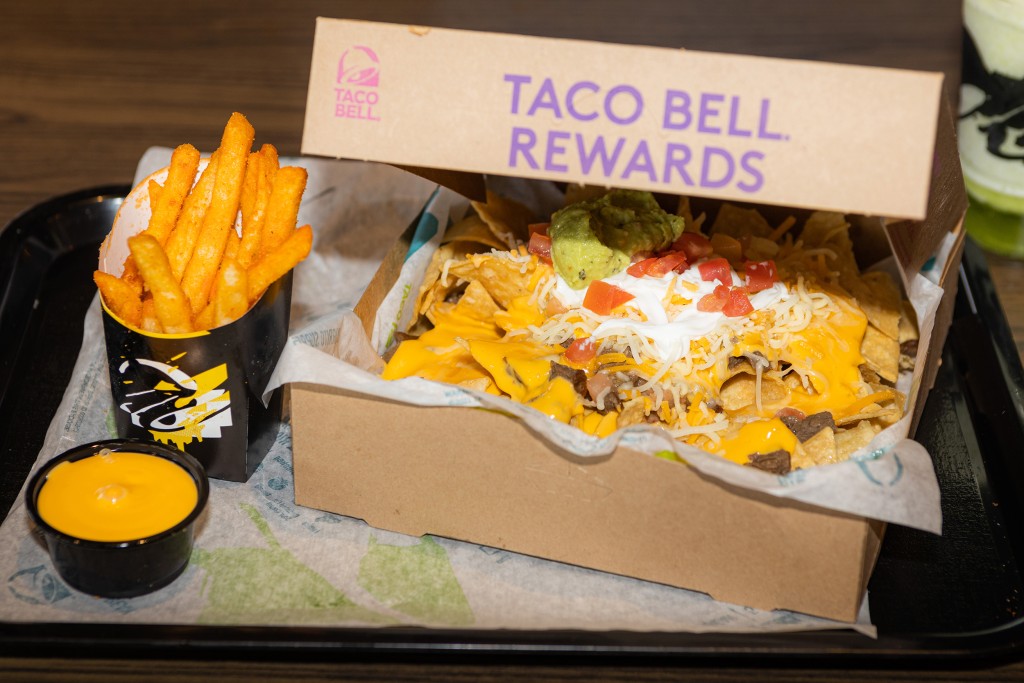 The only Cantina-exclusive menu item is just a super-sized version of an old one: the Grande Nachos ($6.49). You may be asking, “Does she mean Nachos Bell Grande?” I do not. I sneer, now, at the wan, baby-sized Nachos Bell Grande.

The Grande Nachos are sized for lovers. According to a television screen over the register, they feature “twice the amount of seasoned beef.” The beef is very important. I tried to order my nachos with steak for an upcharge, but the kitchen ignored my request. The nachos arrived with seasoned beef—twice the amount.

Be forewarned: you can’t order the Grande Nachos online or (as of this writing) at the self-serve kiosk. Only the regular Nachos Bell Grande, with its Insufficient Beef. If you want the real thing, you’ll have to talk to someone at the front register. You can order alcohol there, too, but only if the person is wearing a referee shirt. You can also order alcohol at the kiosks, but it doesn’t seem to do anything; the bar doesn’t see the tickets.

Are you confused yet? I am, too.

On my first visit, I used the touch screen to pay for my meal as well as a Baja Blast Twisted Freeze. My food came out quickly, but my drink never arrived.

After several minutes of waiting, I asked a bartender where I was supposed to pick it up. “What did you order?” she asked, then poured it for me without question. On my next visit, I paid for a cheap beer at the kiosk, and the same thing happened. I realized too late that I could have told her I had ordered anything.

The key advantage of the self-service kiosks seems to be surfacing overlooked menu items and making customizations easier. On a touch screen, it’s easy to nix the sour cream or add a side of avocado ranch. That doesn’t mean you’re guaranteed to get what you ordered.

On one visit, I paid an extra $1.80 (a 100% upcharge) to sub in chicken on a taco that arrived with regular ol’ beef. Taco Bell seems very, very invested in getting me to eat more seasoned beef. On that same trip, a lactose intolerant friend ordered a taco without cheese and received one with it.

Order mix-ups aren’t surprising in fast food, but the Taco Bell Cantina isn’t always fast. I waited 30 minutes for my food on that visit, even though several tables in the dining room were empty. That kind of wait would be forgivable at a full-service restaurant. Here, it feels like a prank.

The food carries a slight upcharge relative to other Tacos Bell, and the margins are unpredictable. Some items, like the Crunchy Taco, are $0.20 more expensive at the Cantina; others, like the Cheesy Gordita Crunch, will cost you an extra $0.40. Call it a vibe tax.

The vibe is, in fact, taxing.

In an attempt to experience the Cantina in its fullest expression, I wandered in at midnight on a Saturday.

DJ Ray Peña was spinning records, wearing a t-shirt that read “sarcasm: just one of many services I offer.” His music choices, like the Cantina itself, seemed tailored to millennial nostalgia: Nelly’s “Country Grammar,” Lou Bega’s “Mambo No. 5.” 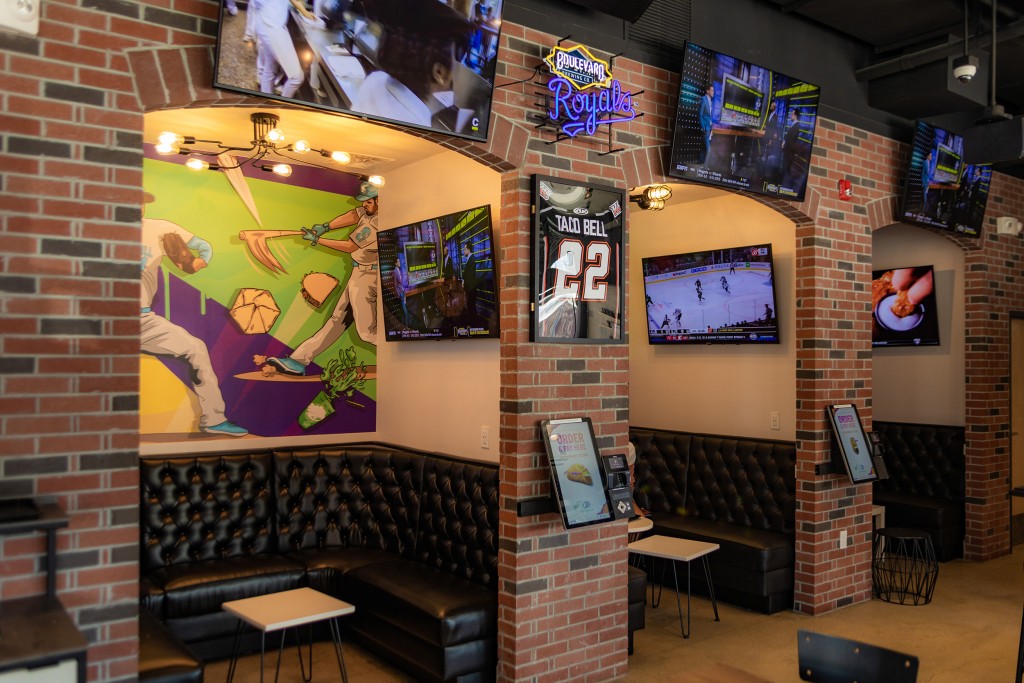 The vibe. // Photo by Zach Bauman

A policeman named “Officer Sprinkle” idled in the corner. The lights hadn’t dimmed; the restaurant still looked like the inside of a tanning bed. A couple customers were dancing, but most people just looked bored.

I weaved my way toward the back of the restaurant to observe a line that had formed outside of the single-stall men’s restroom. Minutes passed, and the line grew restless. Eventually, three women emerged, unapologetic and reeking of marijuana. I liked them immediately. They alone seemed to understand what Taco Bell was for.

For once, my food came out right away. The $2 Chipotle Ranch Grilled Chicken Burrito (from the Cravings Value Menu) was the best thing I ate across all of my visits (and the same price here as any Taco Bell).

The tortilla was nicely browned, the burrito held its shape, and the chipotle ranch drizzle swaddled the filling in a sin-eating blanket of fat and heat. I could eat 100 more of these—especially if the employees let me smoke a joint in the bathroom.

I doubt I’ll have trouble meeting my goal. DRG has 67 metro Tacos Bell in their portfolio; they can’t throw me out of all of them. Plus, McGuire tells me Westport might not be the only KC Cantina for long.

“We are actively looking at sites to potentially open a second Cantina,” he says. The company’s always expanding; a rolling stone gathers no más.

Wherever that second Cantina winds up, it’s likely to succeed. For all my complaints about the restaurant’s execution, it’s undeniably popular. As for what it’s adding to Westport? A 3 a.m. bar for Mondays, I suppose.

That, and a Taco Bell.