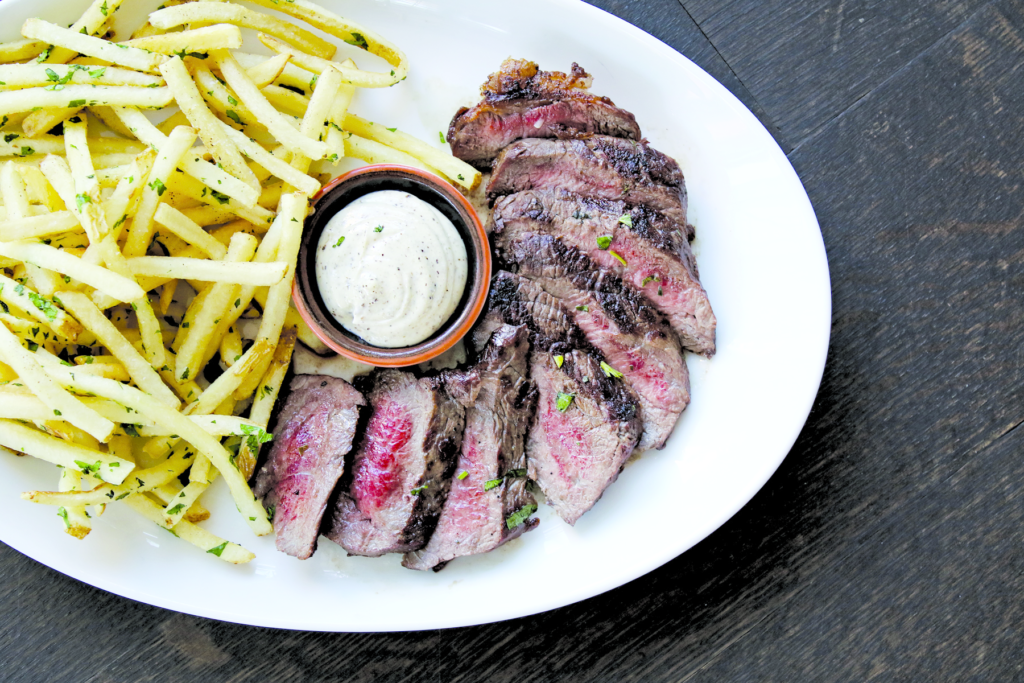 I thought I knew what I was getting into. I’d planned my visits with the care of a pensioner plotting a bucket-list cruise, plotting exactly where to splurge and where to save. I’d received a $250 reimbursement cap from this very paper. (“All right,” my editor joked at the writers’ meeting when I pitched this as my next restaurant. “Everybody throw 20 bucks on the table.”)

But nothing quite prepared me for the delirious cosmic joke of being handed an $80 bill for a solo dinner (at which I had ordered neither drinks nor dessert) while Lee Dorsey’s “Working in the Coal Mine” played over the speakers.

Griping about the tab at a place like Stock Hill — Bread & Butter Concepts’ platinum-plated vision of a modern Kansas City steakhouse — seems asinine. The 14,000-square-foot restaurant isn’t coy about its price point, from the glittering accents to the white tablecloths to the metric Winklevoss of sport-coated servers. The branding is clear: Expense accounts encouraged; student-loan debtors need not apply.

No, my complaint is with the food. It’s always good at Stock Hill, but it’s seldom great. Owing perhaps to a surplus of conservatism in the kitchen, the flavors here simply are not as luxe as the price or the presentation.

Nearly every plate is at least competently executed, which is no surprise considering who’s at the helm. Joe West, Stock Hill’s executive chef, served as Bluestem’s chef de cuisine before starting his own pop-up supper club, Kusshi (which was to have debuted inside Erik Borger’s midtown ramen warehouse, Komatsu; the deal soured). And he is capable of boldness here: The wood fire–grilled oysters, an appetizer, delivers a classic steakhouse dish, each forkful lightly smoked and sleazed with hot butter. Another traditional comfort: a velvety crab bisque, dainty enough for a starter but flaked with enough tender king crab to make a light lunch.

The Akaushi short ribs offer a glimmer of West and chef de cuisine Spencer Knipper’s capacity for invention. When I ordered the dish, each of the three stout ribs came coated in a sticky bordelaise — bitter on its own — that melded perfectly with the other accompaniments: a creamy onion soubise, a fresh green spiral of bone-marrow-and-spinach sauce, and a stamp-size leaf of red-veined sorrel. 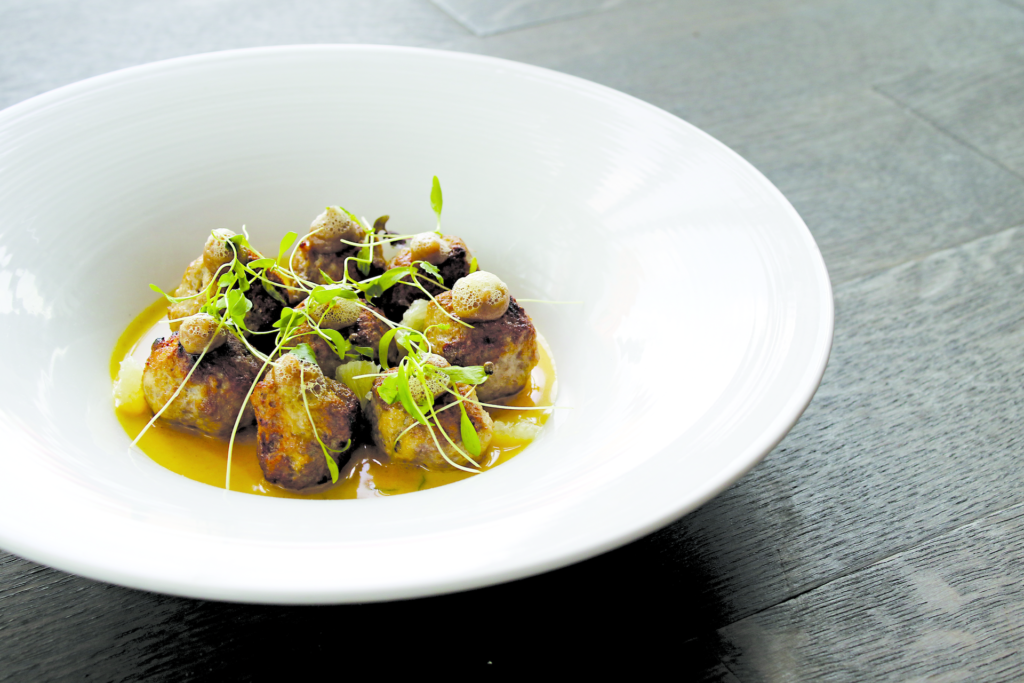 Still, if I could order only one appetizer, I’d pick the fire-roasted lamb meatballs (above), which are tender and pungent, nestled in a sweet, spoon-coating medjool date sauce and tipped with a bubbly vadouvan-curry emulsion. The sauce is elegantly composed, sparking with intermittent flashes of fresh lime and cilantro. And the feather-light curry froth makes the dish’s heavy flavors feel summery.

Lunch is a (slightly) more economical way to sample Stock Hill’s menu, and the dining room had several open tables on my weekday visit. The short-rib sandwich was the biggest hit that day. The wine-braised ribs were tender and subtly sweet, thanks to a snowcap of caramelized onion, creamy horseradish and melted gruyere. The salt-and-pepper bun was sturdy enough to support the meat but yielded softly to the touch.

I’m holding out on you, though. How is the steak, the restaurant’s raison d’être? How are the high-end steaks, seared on a wood-fired grill?

At lunch, Stock Hill offers three 7-ounce takes on steak frites. The hanging tender, a cheaper cut not on the dinner menu, was flavorful enough when I sampled it, with a consistency approaching that of pot roast. But the ribeye plate was a disappointment, and the pre-sliced filet, which I ordered medium rare, arrived chewy and undersalted, with a bitter, burnt crust. (The slim fries were hot and crisp, and I preferred them to what the menu calls “triple cooked French fries,” which are available as a side and are well seasoned but suffer from mushy innards.)

Our server urged us to come back for one of the heartier dinner steaks, but the issues seemed to scale with the meat. Stock Hill has 11 steaks on the menu, with an emphasis on wet-aged, dry-aged and wagyu ribeyes and Kansas City strips. This is where you expect to pay, and so you do: $37 to $64. The kitchen will halve a hefty steak and plate it for two without surcharge or visible judgment. If you go this route, however, give the women in your party fake mustaches to wear. I split the dry-aged Kansas City strip ($46) with my husband and soured the rest of his evening railing humorlessly against the his-and-hers steak knives our server delivered with the meat. His: a sensible, wood-handled blade with a serrated tip. Hers: a tampon-sized, pearlescent-handled prop knife suitable for Kate Moss cleaning her fingernails.

They brought him the better half of the steak, too. While I was busy sawing through my half with (delicate! feminine!) exertion, my husband was gliding through a piece of perfect, sushi-red strip. We found some equality, though: As I’d found at lunch, both halves of the steak were underseasoned and bitter-crusted.

Stock Hill’s house rubs and sauces lend the steaks a much-needed flavor boost — though it perhaps goes without saying that at this price point, they should shine on their own. Diners have four fluids to choose from, including a house-made steak sauce (boozy and thin) and a creamy horseradish (conventional but satisfying). My favorite was the wasabi-yuzu chimichurri, a clean green paste with an assertive brightness. 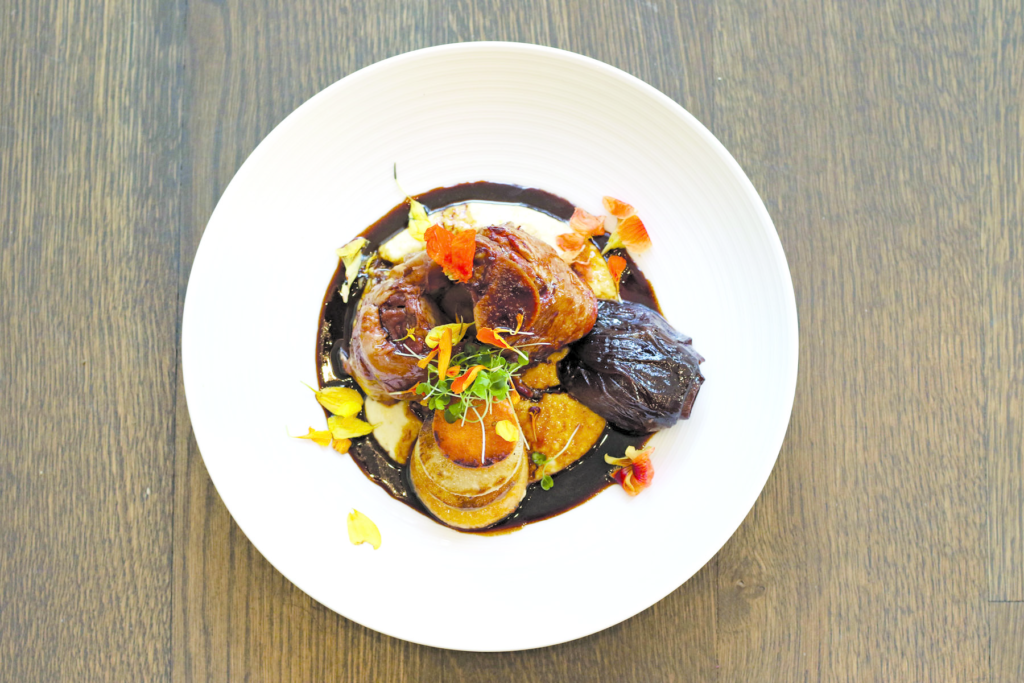 A few of the nonsteak entrées had similar flaws — I’m thinking of a pork-shank osso buco (above) that was tenderly, exquisitely cooked … and bland. But West’s menu pulses with abject brilliance. The supporting players to that pork shank — glossy polenta and an “excessively roasted shallot” (essentially a nutty onion jelly) — were rich and satisfying. And the bread served before the main course — a soft, yeasty muffin — was bursting with cheesy, herby flavor. It was the steakhouse equivalent of a Red Lobster cheddar biscuit, and I unabashedly adored it.

The family-style sides are mostly worth ordering. Though several are standard steakhouse fare (whipped potatoes, plus-size fries), West fashions each with an unexpected edge. A creamy risotto comes laced with the justifiably trendy Hen of the Woods mushroom. And the horseradish hash browns inflict no stiff sinus burn; the dish is instead a well-executed gratin with a peppery kick and a tortoise-shell-stiff lid of oven-crisped cheese. 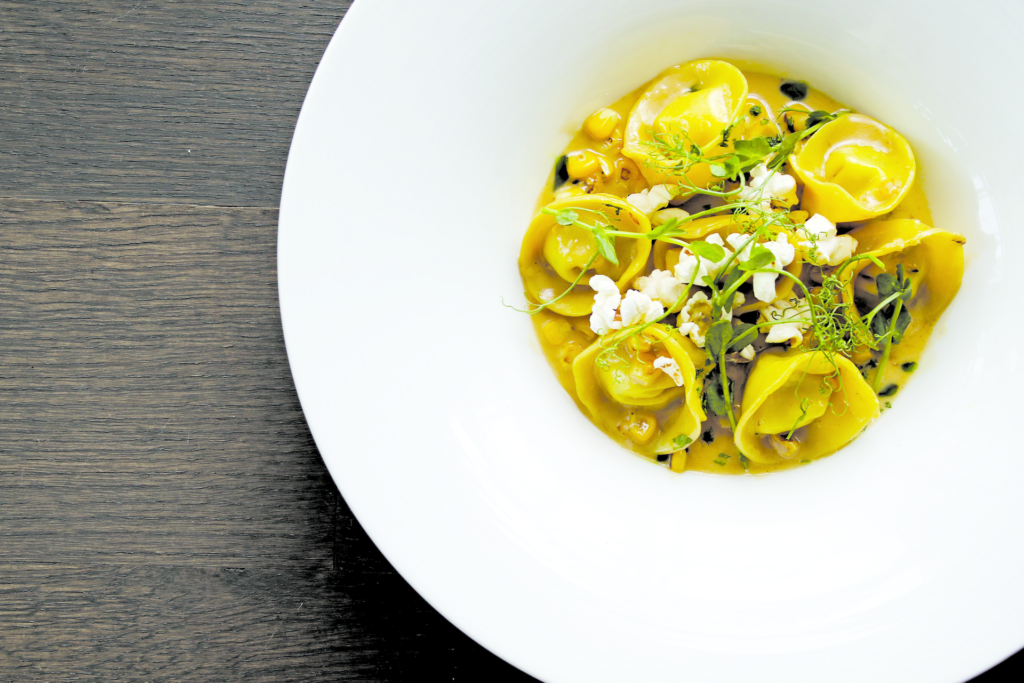 The king-crab tortellini turned out to be the highlight of all three of my visits. The surprising dish is an imaginative, nostalgia-evoking take on summer sweet corn slathered with butter and salt. Fresh corn kernels and a sprinkle of puffy popcorn give the crab-stuffed pasta a playful air, and a duo of pickled chanterelles add buoyancy to the popcorn-butter sauce. That red-veined sorrel shows up here, too, complicating all that sweetness and light with a small, bitter (and welcome) charge. Each bite transported me to a corn-on-the-cob stand in rural Iowa, blasted by the July heat.

That’s no small bit of Proustian conjuring for a restaurant of this ambience. Stock Hill’s dining room has been assembled from Lehman Brothers surplus, all gold and glass and leather and greige. It’s a fitting vibe for the 4800 Main building, which once housed the Kansas City Board of Trade; tapping into that history, one of the bar’s signature old-fashioneds is called the “Wolf of Main Street.”

I’ll vouch for the Kansas City Steakhouse Punch, a tiki-tinged drink that combines corn-sweet Rieger whiskey with apple whiskey, Chinato and falernum. The resulting cocktail is smooth and roundly spiced, with a lick of smoke from oaky Lapsang Souchong tea. My only objection: It’s cooled by an oversize ice raft that protrudes well over the lip of the glass. Mine slapped me across the mouth whenever I angled for a sip.

The Hello Yellow Brick Road was less successful. The blend of rye, cognac and sherry I tasted one night was uniformly sweet, even after the small salad of mint had wrought its herbal magic. Worse, the presentation came off like a Trump Tower burlesque of swank. The pink-copper mug arrived domed with nugget ice and stippled in gold flakes. But after a few minutes’ melt, the gold flakes had forged unappetizingly into the shape (and color) of a microwaved cheese triangle.

The Rocking Chair, a scotch-based old-fashioned, was somehow even flashier. The old-fashioned glass arrived inverted on a tiny cast-iron pan, trapping a skein of cherry-tobacco smoke underneath. “It makes a great Snapchat story,” our server told us, then lifted the glass with a flourish, wafting the smoke around us with the solemn grace of a ribbon dancer. There’s no tasting it on Snapchat, though, and I admit that the drink itself was too good to mock. That wisp of smoke permeated the liquor, adding dusky bite to the seductively balanced blend of Auchentoshan American Oak, honey and bitters.

Diners with lustier appetites (and more robust budgets) can follow their aperitifs with one of pastry chef Kelly Conwell’s creations. Skip the “Lime” — although the lime curd was tart and firm one recent evening, the dessert was beachy in both flavor and texture (a too-grainy chocolate-graham-cracker base; a sandy-textured pineapple sorbet). The “Meyer Lemon” is a better bet: a handsomely plated dessert, trimmed with thin shards of meringue and a rich crème fraiche ice cream.

Stock Hill isn’t yet living up to the imagination of its chefs or the polish of its swarming servers. This town has better options for special-occasion splurges. But in many respects, Stock Hill is doing what an upscale steakhouse is supposed to do — spinning a cocoon of lavish comfort around a menu safe enough for bankers with hypertension, and attractive enough to give their girlfriends something to Instagram on the ride home.

Best bet: Sip a Steakhouse Punch in the bar and split the fire-roasted lamb meatballs and the wood fire–grilled oysters with a friend. If you stay for dinner, order the king-crab tortellini.