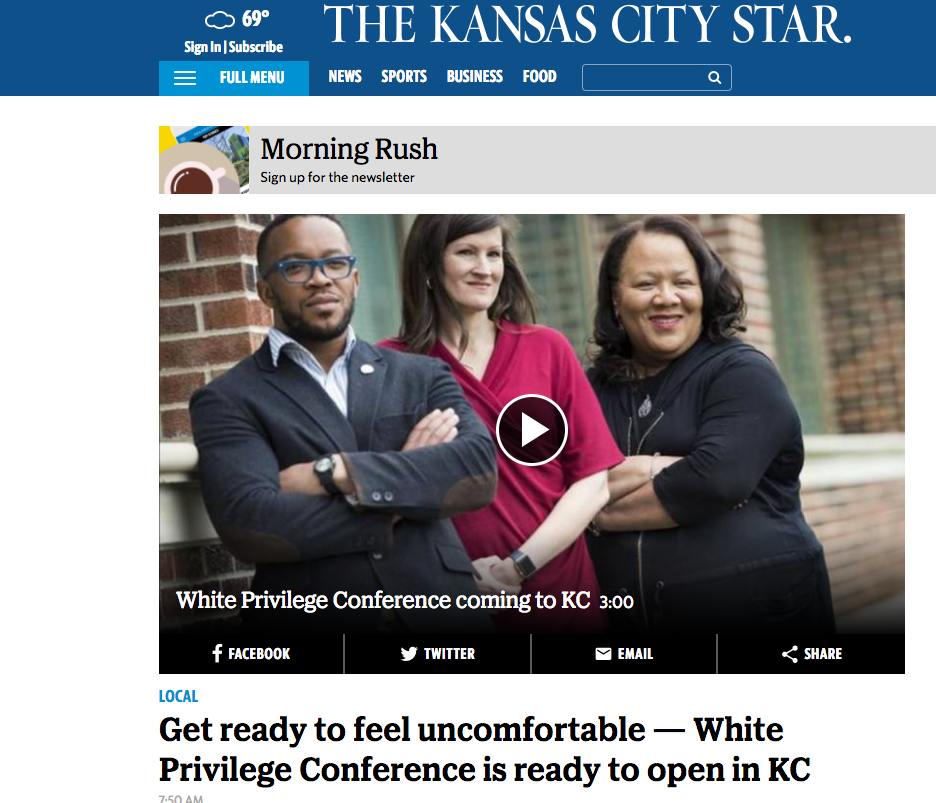 It’s not hard to feel a little sorry for Joe Robertson today. The Kansas City Star reporter drew a shortish straw with his assignment to write about the National White Privilege Conference, the mushy-sounding, academic-courting, closed-to-the-media event set to draw a couple of thousand people here later this week. On the spectrum of conventions the paper of record must acknowledge, this one must have made the newsroom really, really miss SkillsUSA.

That’s the idea you get, anyway, when you read Robertson’s very unfortunate story, an object lesson in how not to address a sensitive topic.

The reporter starts on his tiptoes: “This is not going to feel good: The National White Privilege Conference is coming to Kansas City.” Eventually, he will mention Troost and quote some stark figures about KC’s inner-city life expectancy. In between, though, he gets pinned by the unfortunate urge for false equivalence.

His (and/or his editors’) desire not to kick a trolls’ nest starts with the rest of his lead: “The notion that whites in America step into their communities with more advantages of earned and unearned privileges than their neighbors of color is a hard conversation starter. The local social activists who urged the annual conference to come to Kansas City know that talking about ‘white privilege’ brings charges of reverse-racism. It gets lampooned as white guilt.”

In fact, Robertson, with his “this is not going to feel good,” has just made his own small joke about white guilt. But what follows isn’t very funny. Problematically, his story fails to mention this city’s pioneering achievements in redlining, which continue to define who around here even has “neighbors of color.” Also, the racism he introduces further down is of the more commonplace variety, not reverse at all — and altogether free of context.

In attempting to illustrate the touchiness of his topic, Robertson cites a 2011 Harvard Business School study, which found that white persons believed themselves discriminated against more often than before, while black persons signaled less racism against them. Here’s Robertson: “A famous Harvard University study in 2011 showed the disparate views of racism, with just 16 percent of whites believing there is still ‘a lot’ of discrimination, compared to 56 percent of blacks who felt that way.”

For many, the word Harvard (helped along by Robertson’s description of the study as “famous”) will suggest that the research involved reflected some bracing new truth. But no. Even before the Ivy League gets name-checked, though, Robertson has attempted to camouflage this hillock of vommed-up research with another laugh line: “For people among the white majority who struggle economically with no trust funds in sight, many see perceived favors extended to minorities as reverse racism.” Right, trust funds, got it. As though only white persons without wealth harbor — or, you know, totally fucking stoke — racial resentment.

OK, so Robertson is showing his reluctance to embrace this assignment. Whatever. But what follows is inexcusable.

Robertson writes: “The David Horowitz Freedom Center in Los Angeles is among organizations and groups at the front of a growing belief that American’s are now seeing ‘black skin privilege.'” On the Star‘s website, the last three words of that sentence link to a PDF of an ugly piece of propaganda produced by the “Freedom Center,” which noted hatemonger Horowitz uses to fund some of the more virulent segments of his alt-right progeny.

Let me emphasize this: With no explanation of Horowitz’s background and not a word about whatever other “organizations and groups” believe that “American’s” [sic] are “seeing ‘black-skin privilege,'” the Star sends its readers to go scan 50 pages of anti-black agitprop.

Is this supposed to ensure that we hear from every side when establishing whether there is such a thing as white privilege?

I emailed Robertson about that paragraph. This is his response in its entirety: “I see your concern about more context. Thanks for the note. The inclusion of that group and that study is meant to reflect the extreme views that collide with all of this.”

What have we learned today, then? I guess the lesson is that the Star wants to make sure that extremists have a say as we consider anew centuries of racism, a morass we’ll just call “all of this.” Maybe if the convention were called the National White Cluelessness Conference, the paper’s editors might simply have said, “Hey, we know from experience: That’s absolutely a thing,” and left out the part that mistakes racist horseshit for harmless ideological harrumphing.