The Chris Rock spin-off could have been anything it wanted. It's just another Saw, but with a few more (mostly) intentional laughs. 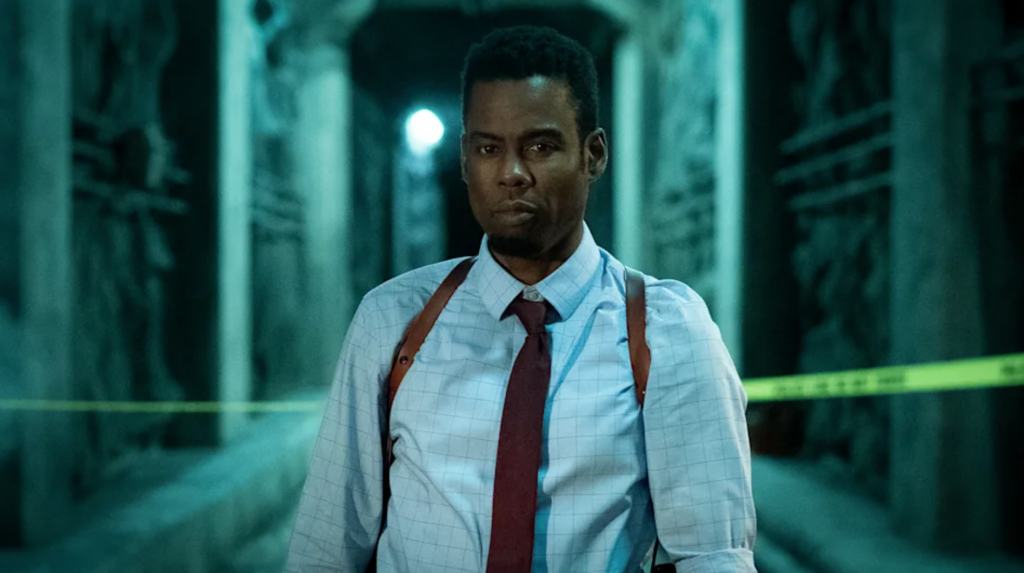 I feel like I start a solid third of my film reviews with some variation on “Horror-Comedy is a difficult balance to strike and here’s another misfire.” And yes. That’s how this one starts too. But for very odd and very individual reasons.

Today, we’ve gathered to discuss Spiral, a sequel/side-story to the Saw franchise, starring Chris Rock as cop, who is the son of Samuel L. Jackson, who is also a cop. Rather than attempting to approach the film directly from the front, it is worth noting its origins. At a wedding in Brazil a few years ago, Rock found himself seated next to a Lionsgate executive, and asked “Hey, you ever considered a Saw with some comedy in it?”

To be fair, the extended Saw franchise is embedded with its own sense of body horror humor, with few franchises seeing similar longevity in the last decade-plus of horror cinema. Not since the 80s/90s have we had an IP with so many entries and so much opportunity for someone to either “not make the worst one” or to knock a surprise injection of creativity out of the park.

Also to be fair, the idea of doing a Saw that leans into the ridiculousness of a clown’s extensive suicide traps, featuring the voice of a historically accomplished duo of Black comedic actors, is the easiest sell imaginable. Yes. Yes, please. Did anyone know what this would actually look like? No. Did the trailers set up any of what that tone might be? Absolutely not. So going into Spiral is a fascinating experiment: is this even a Saw movie? Is this to be more adult-like a Se7en—or more cartoonish like a Scary Movie?

The somewhat unfortunate answer to this is that Spiral is… just another Saw film. “It’s not the worst one” applies here. “It’s not even the best among the most recent ones” also applies. But. It does bring a whole different energy, excitement, and spirit to a franchise that many had probably abandoned.

Rock plays a cop who is constantly betrayed by the crookedness of all the other cops in his department. Still, his father (Jackson) was the chief who used to be a pillar of the community, and who everyone looks up to. Rock’s restless pursuit of justice—fueled by distrust of fellow officers—lands him a forced partnership with a new detective (Max Minghella). While the real “Jigsaw” from previous Saw entries long-since dead, it becomes clear that a recent string of murders on crooked cops (via similar elaborate traps) is the work of a copycat.

What follows is a series of murder-death-kills that feel almost more at home in a Final Destination than a Saw; paired with a sort of clumsy social justice message about the broken nature of the police force. Albeit, from the perspective, of the police force? This all goes down while Rock fluctuates between doing monologues that track with his mid-00s stand-up, and/or approaching serious scenes with disconnected comedic energy.

It isn’t particularly funny, but it lands jokes almost best when it intends not to. It is tremendously fulfilling for the gorehound in your life, with plenty of segments that will have you averting your eyes from the extended torture. But Chris Rock and Samuel L. Jackson simply sharing a screen together will be more than enough for some, and the ending is so well played it redeems an entire act of the film’s problems.

Spiral is better than fine. If there’s a lesson to be taken from playing this game, it is that there’s great hope for the future of the Saw franchise, the more it allows new voices to tell stories that branch beyond its normal borders. Copycat killers following the elaborate blueprints of a world-renowned serial killer are a great template for a revenge title. Allowing the main voices and their means-to-an-end 25% more space to breathe would yield incredible results. Here’s hoping it’s just the first experiment in that direction.