Spinning Tree’s Shipwrecked! An Entertainment is exactly that 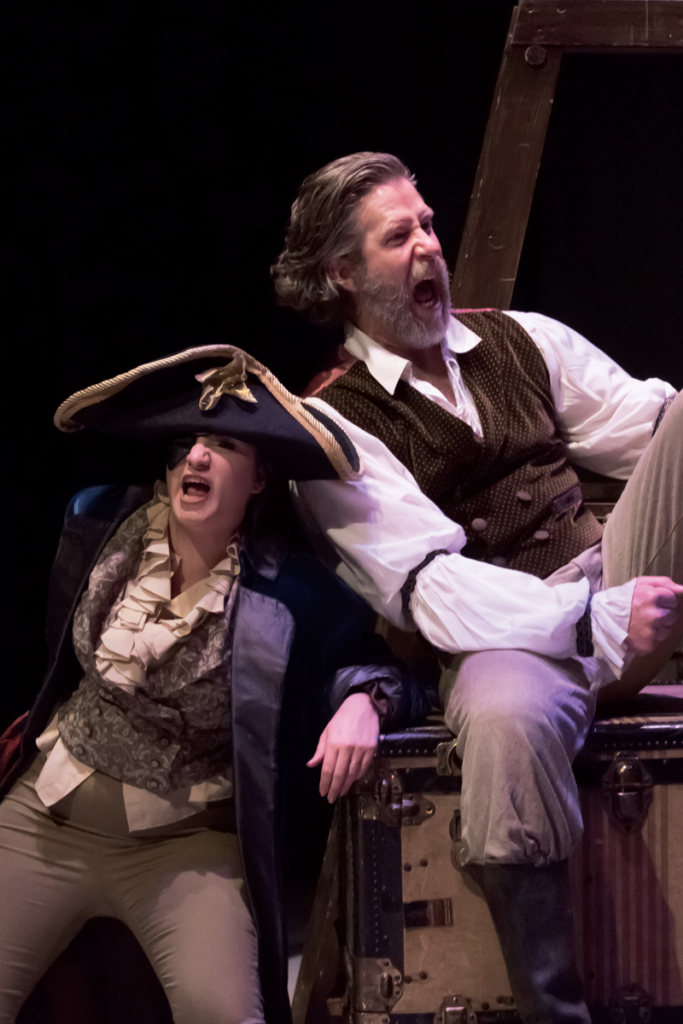 After a grueling inauguration week, Spinning Tree Theatre’s latest production offers a glimmer of hope for our post-truth world: “Alternative facts” can be pretty entertaining.

Such is the case with Shipwrecked! An Entertainment, playwright Donald Margulies’ exuberant ode to tall tales and the theatrical imagination.

The extended one-act (Spinning Tree’s production runs a little over 90 minutes) follows Louis de Rougemont, a real 19th-century adventurer, as he narrates his own unbelievable escapades. The role is a meaty challenge for any actor: de Rougemont never leaves the stage as he repeatedly pingpongs between death-defying peril and heart-wrenching romance (with a few tumbling passes thrown in).

Enter actor Charles Fugate, who delivers the obligatory preshow announcements in character and welcomes us to his “temple of the imagination.” Fugate played the role of de Rougemont in Spinning Tree’s 2013 production as well, and his reprisal adds a wistful tinge to the character’s exploits. We watch, transfixed, as Fugate transforms from a sickly, sheltered boy to a beady-eyed pearl hunter to a lovestruck castaway on a deserted Australasian island.

Assisting Fugate are actors Bob Linebarger and Megan Herrera, who each play multiple supporting roles. Linebarger (another alumnus of the theater’s 2013 production) is especially committed as Bruno, de Rougemont’s overly affectionate dog. And Herrera shines as both a dogged reporter and the grizzled Captain Jensen. (A bit of wrestling with a straitjacket “octopus” is a comic — and choreographic — highlight.)

Director Vanessa Severo keeps the production design lean, letting actors and audiences project their imaginations onto the stage. The constraint yields some of the most charming, creative work I’ve seen this season: The cast wheels around on dollies to suggest ocean paddling, or pilots white-rope “jellyfish” through an airy aquarium; in lieu of recorded sound, actors use train whistles and finger cymbals for effects, or hum to score an ethereal ocean underworld.

The minimal set highlights the maximal contributions of Shipwrecked!’s designers (as well as stage manager Emily White, who calls a tight show). Lighting designer Nicole Jaja treats the white stage floor as a holodeck for shimmering colors, feverish textures and crisply delineated playing areas. But her most memorable look is also the most subtle. After reporters debunk de Rougemont’s “adventures,” he stands lonely on a bare stage, shoulders shrunk small — but Jaja lets his shadow loom, larger than life, on the curtains behind him.

Gary Campbell’s props and costumes are impeccably detailed, making Herrera and Linebarger’s multiple character changes clear and convincing. More remarkable: Each of Campbell’s distinct pieces (a structured naval coat for Herrera, a lop-eared aviator hat for Linebarger) add up to a coherent palette, placing us confidently in Margulies’ world.

The production stumbles only in its overstretched finale. Severo offers us a whimsical final image — de Rougemont riding a coloring-book sea turtle, lights rippling across his features from an ocean of undulating fabric sheets. But Fugate loses steam early in his lengthy monologue, swapping the radical joy that pervades Margulies’ script for a somber note sustained too long.

Still, Shipwrecked! An Entertainment lives up to its title, offering a night of reckless escapism and unbridled wonder. And for some of us, a little fiction may be exactly what we need to choke down the reality.