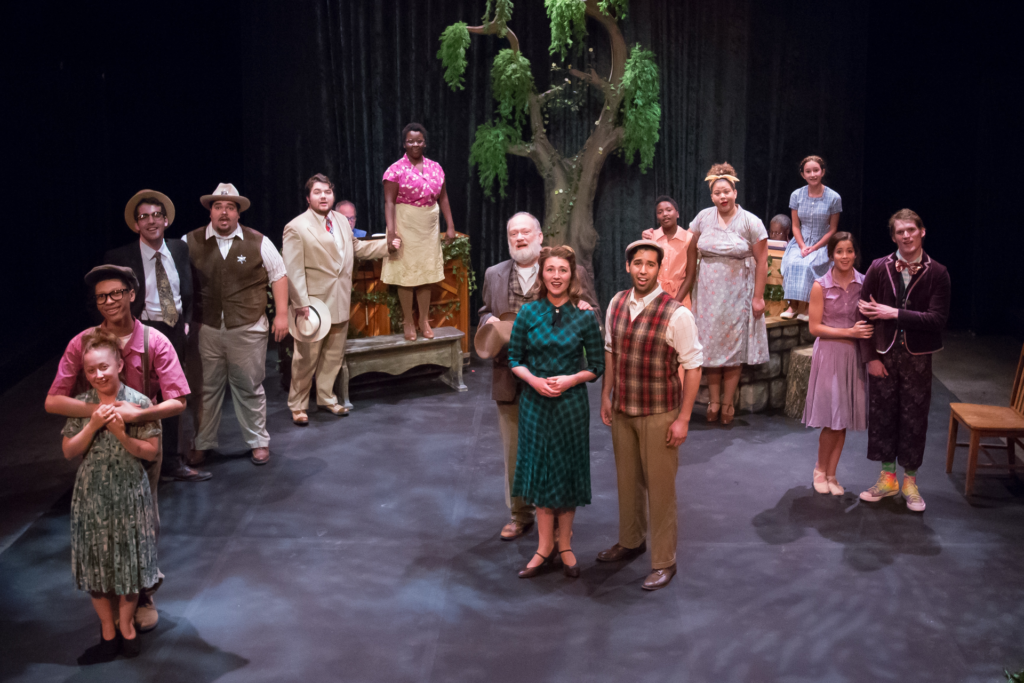 Some good news for your week: You still have a few days to catch Spinning Tree Theatre’s production of Finian’s Rainbow, a charm-soaked, colored-pencil sketch of rainbows, leprechauns, starry-eyed lovers and aggrieved sharecroppers rising up to eat the rich.

Finian’s is something of a musical misfit. Its characters are cozy fable archetypes, neatly sorted into black-hat money-grubbers and white-hat ingenues. But its politics are strangely subversive — doubly so in the context of its 1947 debut. E.Y. Harburg and Fred Saidy’s book pokes at racists, nationalists and hypocrites of every ilk. (In one scene, a politician says of the U.S. Constitution, “I haven’t had time to read it. I’m too busy defending it.”)

Thanks to Spinning Tree’s rustic accompaniments, including two upright pianos and a handful of Bob Ross–issue painted set pieces, the resulting production comes off like The Fantasticks as told by Eugene V. Debs.

This is to the company’s credit. Under Michael Grayman Parkhurst’s direction, the cast succeeds in toeing a wavy line between full-throated whimsy and tongue-in-cheek satire. 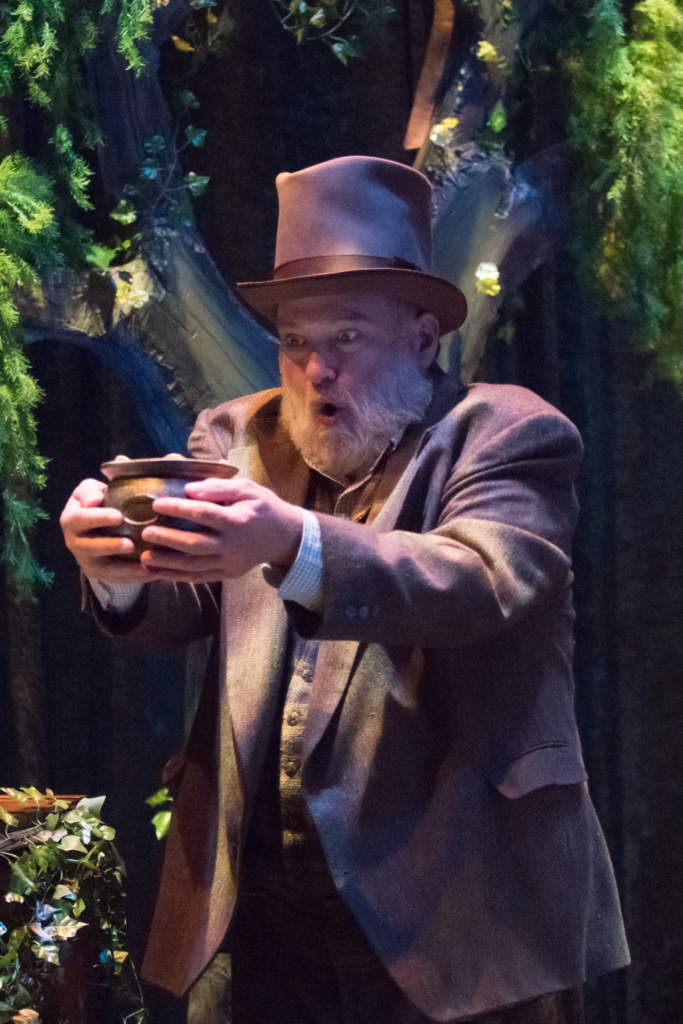 The former shines through the charisma and chemistry of Finian’s major players. Actor Phil Fiorini lends a winking gentility (and a pitched lilt) to Finian, a grandfatherly Irishman who has recently immigrated to the fictional state of Missitucky. His goal? Plant a stolen pot of leprechaun gold on the grounds of Fort Knox and become filthy rich, because magic.

His sadder-but-wiser daughter, Sharon, tags along to supervise. Though she’s skeptical of her father’s schemes, she soon falls for a local union leader and finds a way to transform dubious magic into credible political action. Elise Poehling is faultless in the role. Her Sharon is self-possessed but vulnerable, and her sweet rendition of “How Are Things in Glocca Mora?” will play in your head long after the lights come up.

“Old Devil Moon” (featuring Poehling and Joseph Carr as her love interest, Woody) is another production highlight, as are Olivia Cabrera’s boisterous performance of “Necessity” (as Sally Ann, a reimagining of the original character Maude) and Siena Radice’s sunny expressions and interpretive flutter kicks (as Woody’s sister, Susan the Silent).

The production design leans into the show’s tonal clashes. Scenery and properties designer Eric Palmquist lends the stage a nostalgic air with ivy-coated pianos and an enormous fairy-tale tree. Nicole Jaja grounds us in the dramatic tension with moody looks and sunrise colors that evoke the titular rainbow without skewing too mod. And Shannon Smith-Regnier’s costumes emphasize class divisions and sylvan charm — no more so than in her design for Og (Michael DeCoursey), a mischievous leprechaun desperate to recover his gold before the clock runs out on his immortality.

Og is one of the show’s most critical roles, responsible for bridging the worlds of rainbow magic and dusty agronomics. DeCoursey isn’t the strongest singer in the cast, but his acting chops largely sell the role. Og’s impish irritability (and all-too-human lust) creep increasingly through the cracks in his “me Lucky Charms” patois. 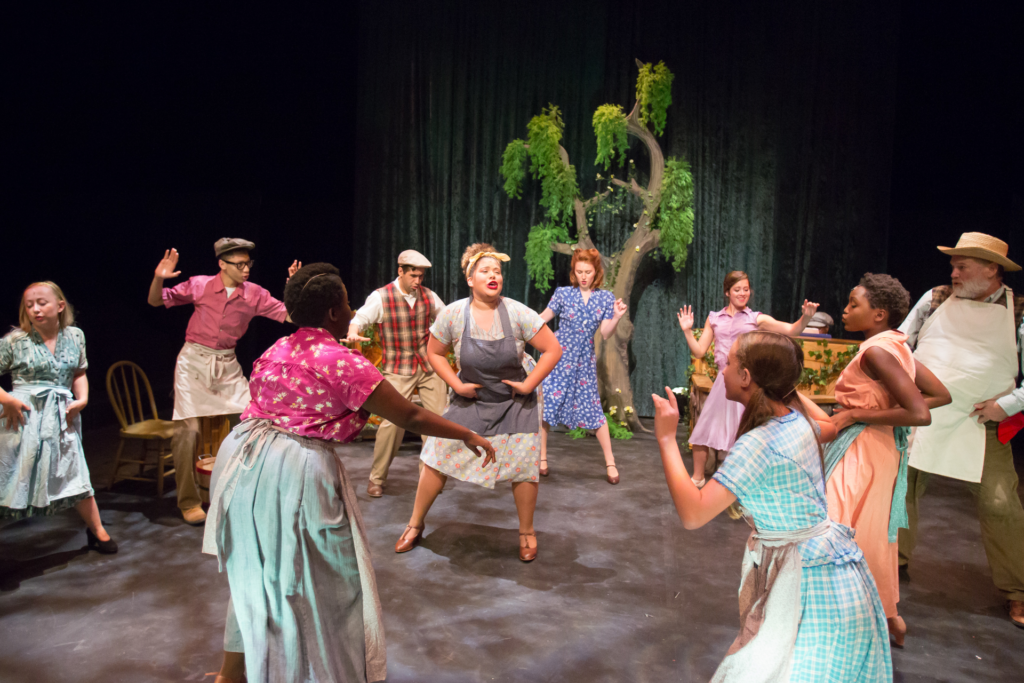 Consider him symbolic of the show as a whole. By the time Act 2 rolls around, Finian’s sherbet palette and kaleidoscopic whimsy begin to feel like a disco Trojan horse for pro-labor, pro-immigrant themes. “When the Idle Poor Become the Idle Rich” is a dizzyingly fun number, with tight chamber-choir harmonies and A-plus aristocratic mugging from the Spinning Tree cast. But it’s also a still-relevant skewering of the double standards for rich and poor folk.

Granted, some of the political material feels clunky today (I’m thinking of a Freaky Friday subplot that turns a racist senator into a black man), but much feels pointed and prescient. Finian’s Rainbow has a keen grasp on the intersection of race, class, and immigration status in post-war America. As one yokel brays, “My whole family’s been having trouble with immigrants since we came to this country!”

And, of course, there are the catchy tunes. Gary Green and Pamela Baskin-Watson pound pianos with the fervor and flair of a whole pit orchestra. Finian’s is a weird show, but it’s worth your time.