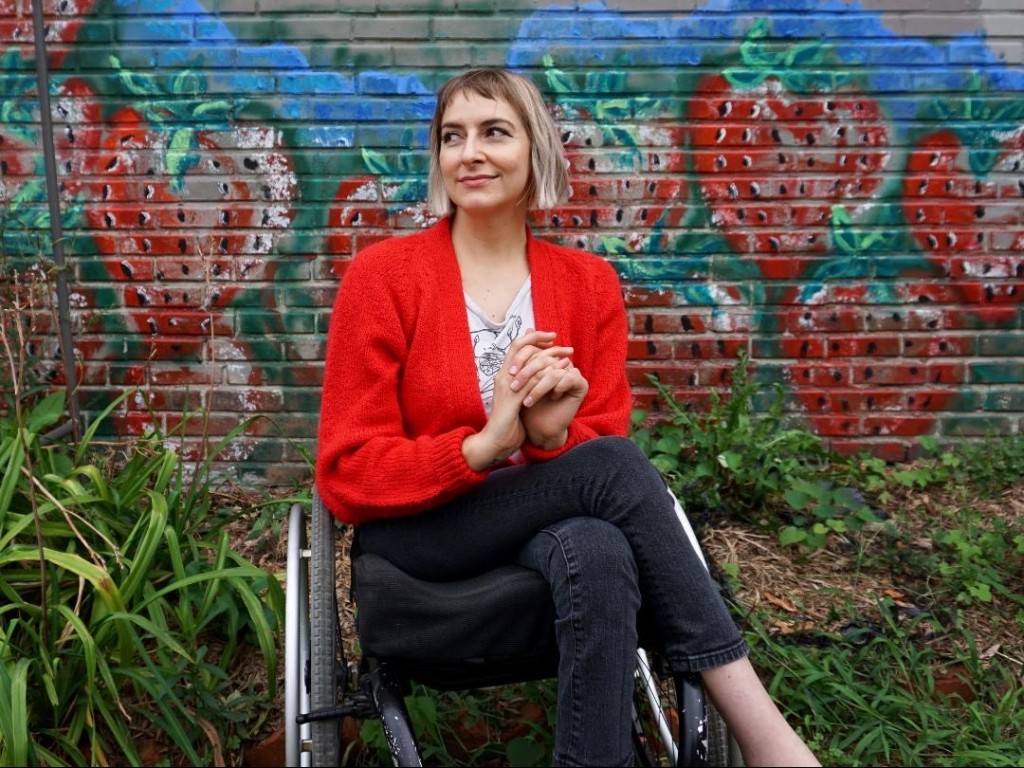 Rebekah Taussig is perfectly ordinary, thank you very much. Of course, adopting this view requires one to ignore her resume—the Kansas City, Kansas writer has a doctorate in Creative Nonfiction and Disability Studies from KU, a CV full of publications and presentations and panels, and a nearly 40,000-strong following on Instagram. But she chose the word carefully for the title of her new memoir, Sitting Pretty: The View from My Ordinary Resilient Disabled Body.

Taussig was paralyzed at age three and uses a wheelchair, which has the effect of making her highly visible (it’s the first thing some people notice about her) and invisible (it’s also the last thing some people notice about her) at the same time. Five years ago, she started the Instagram account sitting_pretty to share her ordinary experiences living in a body that hasn’t…ordinarily been represented with much nuance. Those “mini-memoirs” helped lay the groundwork for Taussig’s first book, released this August.

In ebullient, frequently funny prose, Taussig welcomes readers into some of the most intimate and vulnerable moments of her life while gently correcting common assumptions (simply existing in the world as a disabled person isn’t “inspirational”; an “accessible” entrance that requires two phone calls and an employee chaperone to use is NOT amore).

Some essays are deeply personal, such as her reflections on shame, a feeling that “attaches so easily” to a non-conforming body. Others zoom out to consider the ways in which the modern feminist movement has failed to make room for disabled women under its expanded umbrella—or the complications of kindness when that “kindness” starts and stops at holding open a door. All of them reveal the insidious ways in which ableism harms disabled and non-disabled people alike.

The Pitch spoke to Taussig in early September about her book as well as how the pandemic and new motherhood have shaped her experiences since.

Early in the book, you put forward a definition of ableism that is in part, “building the world around a mostly imagined, idealized body.” Could you talk a little bit more about that?

The imagined, idealized body is a body that is not in pain. It doesn’t really have needs. It has boundless energy. It stays young forever and is beautiful. So the world would be shaped around that in terms of the way that we structure work, where we just kind of expect that everybody is functioning in this kind of this ideal space where nobody is lactating and periods don’t exist and pain doesn’t exist. It’s interesting to think about in the COVID world, where we’re having to be flexible because the fragility of our bodies is in the forefront suddenly.

I was wondering whether the pandemic might have changed or reinforced any of the ideas you take on in the book. As soon as everyone was dealing with the same problem, it seems like it became easy to redesign our workspaces.

I think everyone was scrambling immediately to try to find other ways to do things and keep connection and work in place. Everyone became imaginative very quickly. And what I am curious about is what will happen next, because I feel like already, I’m seeing a lot of spaces clamoring to get back to what feels “normal.” And to me, the truth that was always very apparent is that we don’t need to structure work this way.

What do you hope we take from this time?

My idealism would say, let’s all hold onto this flash of insight where we’ve had to realize that our bodies are frail or potentially frail, right? It’s difficult to hold onto because it’s uncomfortable. And we don’t like to think about ourselves as being frail.

And then also just flexibility and adaptability. I mean, tele-health is an interesting example to me. It feels absurd to think about how many people have had to commute to the hospital, take off a whole afternoon of work to sit in a waiting room to see their doctor for 15 minutes, pay for parking, and pay for fuel to get back. Or, you know, maybe we could find a different way to do this! Let’s just try for a second something else.

That maybe connects with an idea you bring up in the book about our collective failure to imagine or allow for things that we haven’t seen modeled before.

In the accessibility chapter, I kind of dip my toe into wondering what it would be like to actually move through the world and have physical spaces be easily accessible. There’s this scene in Friday Night Lights with a character who is in a wheelchair—he’s paralyzed early in the season. And he gets in his head that he is going to, like, go and run an errand by himself, and he gets in his wheelchair and the whole narrative is just focusing on his willpower. Like, he’s pushing himself to this gas station or something, and it’s this long-distance where he has to go over sidewalks and cross streets and get to the actual building but never once does he actually encounter a physical barrier, which is just hilarious to me.

The freedom of that experience is really like a fantasy world to me—that I could decide I want to drive around and pick a random restaurant and just go into it or go to any one of my friend’s houses without having to have elaborate plans.

Actually, can you talk a little bit about that? Like, a friend invites you out to a new restaurant in Kansas City—where does your mind go?

Immediately, I do a lot of Google image searching. And Google Earth, like actually putting in the address and taking the camera and looking around and trying to figure out: where would I park? And if I park on the street, does it look like the traffic would make it scary to try to put my chair together on that street? Are there stairs leading up to that restaurant? And if I can get any Google images that people have taken inside, am I going to be able to navigate that space or is it really crowded?

Sometimes, if I’m going somewhere for the first time, I will drive to that location ahead of time and try to scope it out myself. I do that pretty regularly. It’s pretty funny, because you can’t really trust anything online that says something is accessible. I don’t want to throw anyone under the bus because these are some of my favorite restaurants—but there’ll be a restaurant that will have the sign, literally the quintessential wheelchair sign next to their bathroom that says it’s accessible, and there will be three stairs to get up to that bathroom. It’s like, no, no, that’s not what that means. It’s such a nice thought, but that doesn’t work.

What do you wish people or policymakers knew specifically about navigating Kansas City in a wheelchair?

A lot of the coolest spots in Kansas City, are across the board the least accessible. I’ve stopped going to—I can’t even think of what it’s called now—First Fridays! The whole thing, there’d be like a two-inch strip of that that’s accessible, right? Or being in the West Bottoms. I think people who are in charge of those events and those spaces might be surprised at how many disabled people in Kansas City would actually love to be there and are the demographic that they’d be aiming for but are just made invisible—I mean, I stopped going because it was such a battle. I say in the book, it’s not like my city is actively trying to keep me out; they just haven’t been thinking about me at all.

You also mention in the book applying for subsidized accessible housing units and being waitlisted for years.

I’m still on the waitlist for all of them.

You’re a new mother now, but you wrote the book before you were pregnant. Is there anything you’d add or update now that you’ve had those experiences?

I think my relationship with my body feels different. In the book, I talked about how I don’t know that I can have a baby. We never had any clue. And so once we found out, we were shocked. I think the whole pregnancy, I was really afraid that somehow something with my body would not be enough and that the baby wouldn’t make it.

And he did. And not only did he make it, but he was just fine the whole time. I guess that’s an interesting picture of the rigidity we have in thinking about healthy bodies and not-healthy bodies and what these bodies can do and what these bodies can’t do. It was a pretty gorgeous example of the ways in which our categorizations of bodies are pretty arbitrary most of the time.