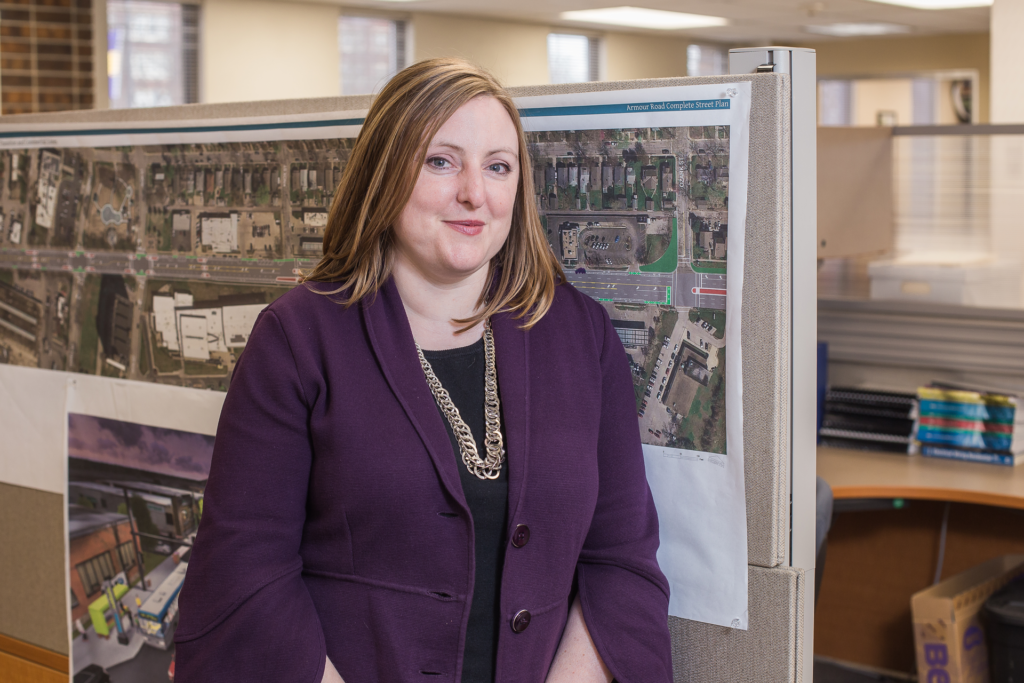 Hometown: Nevada, Missouri. For those of you who aren’t from southwest Missouri, it’s pronounced Ne-VAY-duh.

What I do (in 140 characters or less): I work to position NKC for the future. Right now, my days are full of redevelopment plans, complete street projects and parking studies.

What’s your addiction? Iced tea.There’s always a huge pitcher of it in our fridge, made with Constant Comment tea so it’s a little orangey and spicy.

What’s your drink? Besides the iced tea? In the morning, a winter latte from Second Best Coffee. After hours, I’ll take a sidecar.

Where’s dinner? I married a guy who loves to cook, so dinner is at home, eating whatever my husband, Mark Galus, wants to dish up. He makes a fabulous carbonara.

What’s on your KC postcard? It’s a North Kansas City postcard, featuring the intersection of Armour and Swift, the heart of downtown NKC.

Finish these sentences: “Kansas City got it right when …” It hired George Kessler to design the boulevard system. He gave us good bones for today’s city.

“Kansas City screwed up when …” We accepted the idea that we’re too auto-oriented to be anything else. The Kansas City of today didn’t spring out of the prairie fully formed. It was created by decisions we made, and we can make different decisions to change it to fit our dreams and desires. I think we’re realizing that.

“Kansas City needs …” More density. A lot of the issues the city is grappling with would be a little easier if we focused on creating good density. More density supports better transportation choices, which leads to less land dedicated to parking, which helps create more vibrant places, which attract more people, who will help create more density. It all goes together to make a more successful community, but good density is a starting point.

“As a kid, I wanted to be …” A Dallas Cowboys cheerleader. My mom has the picture I drew in kindergarten to prove it.

“In five years, I’ll be …” The parent of a teenager, which is freaky.

“I always laugh at …” Myself. It took me a long time to learn to laugh at my mistakes, but it’s a lot better than the alternative.

“My dream concert lineup is …” Kathleen Edwards, Jason Isbell, Gillian Welch and Dave Rawlings. In my living room, so I can sing along up close.

“I just read …” Other than the latest City Council agenda packet? The last book I finished was The Things They Carried, by Tim O’Brien, which was amazing. Now I’m reading Children of Earth and Sky, by Guy Gavriel Kay, who is one of my favorite authors, and reading Harry Potter and the Chamber of Secrets aloud to my son, which is very fun.

What’s your hidden talent? I’m a pretty good handbell ringer. I started playing handbells in the fifth or sixth grade and have played in the handbell choir at Grace and Holy Trinity Cathedral for 11 years. I like having regular music-making in my life.

What’s your guiltiest pleasure? Fan fiction. There are some creative and talented writers out there, and when I find something good I get both the satisfaction of a well-told tale and the thrill of discovery.

The best advice I ever got: Share, don’t compare. (“Boomba Hey” to all the Missouri Scholars Academy alumni out there!)

Worst advice? “Declaring any major is better than being undeclared.” And that led to an incredibly miserable sophomore year in college, before I finally figured out that urban planning was the field for me.

My sidekick? My kids, Henry (9) and Margo (6). They’re turning into fun people in their own right.

Who is your hero? My mom, Christine. She raised two daughters as a divorced single mom, and thanks to her, we turned out pretty well. I’m still trying my best to make her proud.

Who (or what) is your nemesis? Paper. It just ends up as the clutter on top of my desk. I’m trying to cut down on paper, but it’s hard to do.

What’s your greatest struggle right now? North Kansas City is a small city with a lot going on. We’re juggling a lot of projects every day and sometimes it’s a struggle to keep up with everything.

My favorite toy as a child: Wooden blocks and Fisher-Price Little People. I laid out a lot of roads, and my Little People drove around my towns in their carrot car, having adventures.

My dating triumph/tragedy: I convinced Mark Galus that I was worth a second chance, five months after I’d broken up with him. Now we’re married and have two kids!

My soapbox: Sexual harassment doesn’t happen because a man isn’t PC enough or because a woman can’t take a joke or misunderstands your poor flirting. Women do a ton of mental work to avoid being victims of harassment — and we’d rather invest that mental energy in something we enjoy, not avoiding creepy assholes. Men, if you aren’t doing something to affirmatively support the women in your life, personally and professionally, and make it clear to other men that you won’t tolerate harassment, then you are part of the problem. Step it up.

What was the last thing you had to apologize for? My son thought I was coming to a special event for parents in his classroom at school, but I had a morning full of meetings at work. I felt pretty bad about inadvertently letting him down.

Who’s sorry now? Nobody — we hugged it out.

My recent triumph: In October, we opened the first stretch of new road in NKC’s Armour Road Redevelopment Area, including the first piece of protected two-way cycle track in the metro area! I’ve been working on this project since Day One working for NKC, and others have been working on it for even longer. It is incredibly satisfying to see planning come to fruition.