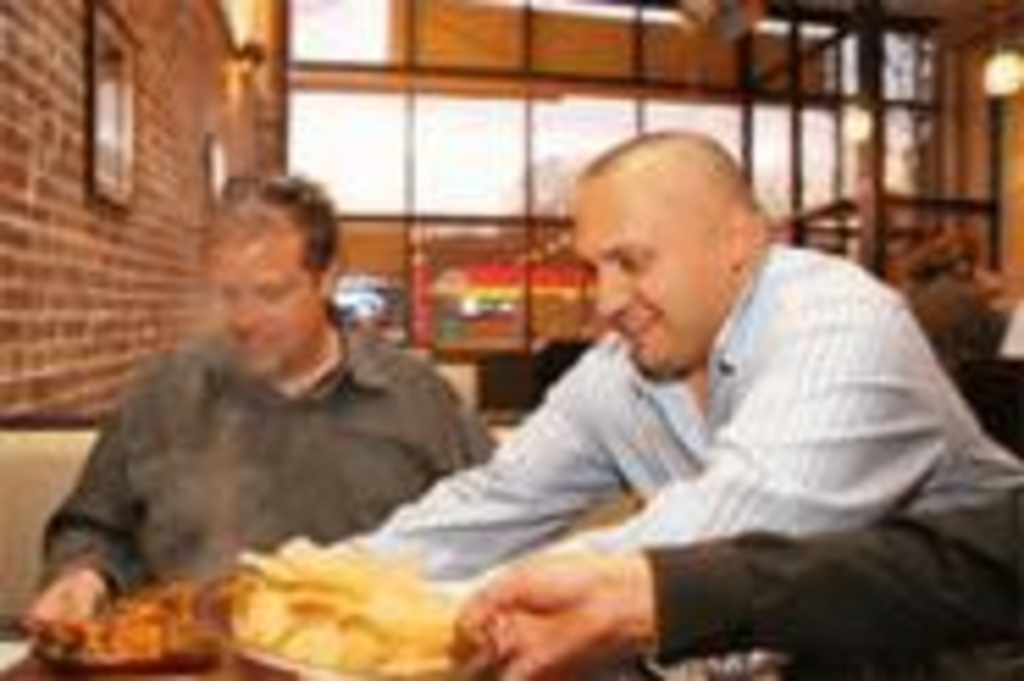 There are no green-white-and-red Mexican flags inside Arturo Cabral’s El Patron restaurant — unless you want to drink one. In that case, Arturo’s mother, Stella, will bring out three glasses: a tiny snifter with a healthy snort or two of tequila, a shot of fresh-squeezed lime juice and another brimming with tomato juice. One night, Stella lined up the glasses in front of my friend Diego and explained that he should first toss back the tequila, then the lime juice and, without missing a beat, down the tomato juice as a kicker.

“It’s very smooth and warm on a cold night,” the grateful Diego told her.

Lots of other items on El Patron’s menu are less potent than a tricolor cocktail but just as warm and soothing. The restaurant’s stark look is a different story. “It’s very 1980s,” said another friend of mine, who likes the three-month-old restaurant even though he finds its concrete floor, black tablecloths and exposed brick walls to be stylish but cold.

The stylish part is what Chicago-born Arturo Cabral is going for. El Patron is his version of a hip, urban Chicago Mexican restaurant: “no Mexican flags, no sombreros.”

El Patron translates roughly as Big Boss, and if anyone deserves to put his own imprint on a new business, it’s Cabral. He has waited nine years to open a full-service restaurant. Back in 1997, Cabral opened the Del Rio, a combination restaurant-saloon at 2934 Southwest Boulevard. In 1998, the neighborhood flooded and Cabral nearly lost his shirt.

“We didn’t have flood insurance,” he says. “When I reopened the Del Rio, it wasn’t a restaurant anymore, only a bar, and we only serve oysters and shrimp cocktail. That’s it.”

When the opportunity came to take over the old brick building down the block at 2905 Southwest Boulevard — last occupied by Gia’s Italian Cucina — Cabral decided to give it a shot and open the kind of restaurant he liked to go to in Chicago: “A trendy venue with more grilled dishes, like a Mexican barbecue, than Kansas City was used to.”

Cabral knew what people would think: Just what Southwest Boulevard needs, another Mexican restaurant. And right across the street from the iconic Ponak’s, no less.

True enough. There’s none of Ponak’s vitality in El Patron’s tiny dining room, which isn’t big enough to contain that kind of raucous energy. But El Patron’s staff is friendly and attentive, and if the décor isn’t exactly warm, the Cabrals certainly are.

The menu isn’t extensive, though Cabral says he plans to add new dishes as business picks up. He’s already stopped serving lunches (“The business wasn’t there,” he says) but has discovered that by keeping his kitchen open later than those of some of his competitors, he’s capturing an unexpected late-night crowd.

Setting El Patron apart from other restaurants on the Boulevard are the parrilladas — stainless-steel tabletop grills that the kitchen staff heaps with pork, chicken, steak, roasted chili peppers and cheese. The smaller grill can feed a couple of people; the bigger parrillada, the one that serves three or four, also includes fat grilled shrimp.

My friend Lou Jane, who spent some time in Buenos Aires last year, recognized the name. “In Argentina, the steakhouses are called parrilladas,” she said. She had toyed with the idea of sharing the bigger tabletop grill with Debbie, Marilyn and me but decided against it after we all devoured way too many appetizers.

“Is this made with Oaxacan cheese?” Lou Jane asked our waitress.

“No,” the young woman said, blushing. “I believe it’s mozzarella.”

“They could buy real Mexican cheese just down the street,” Lou Jane sniffed. “It would make a big difference.”

Maybe, but it didn’t stop me from dipping a dozen or more crispy chips into the fundido — and deciding to order the parrillada, too.

Cabral carried out the tabletop grill with great fanfare. It looked like a sleek metal sculpture topped with a flat pan sizzling with strips of grilled chicken and pork, slices of beef, a few roasted peppers and a couple of curls of white cheese. Debbie, Marilyn and I used tongs to pluck out the delicacies we wanted. Then we piled them on a soft flour tortilla and rolled them up with a spoonful of El Patron’s mesmerizing hot sauce. It was fabulous.

Lou Jane had spotted a Cuban sandwich on the menu and ordered that instead of joining in the communal grillfest. “The description doesn’t sound exactly like a traditional Cubano sandwich,” she had whispered to me. “The real thing is made with ham, roast pork, Swiss cheese and pickles. This version has turkey on it, too.”

The kitchen was out of turkey, but Lou Jane didn’t care. She was impressed when El Patron’s thick, pressed sandwich turned out to be nearly perfect, made with crusty French bread and grilled until the Swiss cheese bubbled.

Lou Jane was the only one who had room for dessert, so she asked our server — a Catherine Zeta-Jones look-alike named Angelina — what sweets were available that night.

At El Patron, cheesecake isn’t cheesecake but a thickly frosted slab of moist tres leches cake soaked with a mixture of evaporated milk, sweetened condensed milk and heavy cream. Imported from a Mexican bakery, the soft cake was delectably sweet.

I returned to El Patron a few nights later with Frankie and Diego, who were impressed that the restaurant appeared to be different from its Southwest Boulevard counterparts.

Diego looked around at the well-dressed clientele sitting in the booths against the south side of the building: “Johnson County sophisticates,” he surmised, “and maybe one couple from Hyde Park.”

He noted that the menu included “the usual suspects” — tacos, a burrito spread and enchiladas. But he decided to try one of the less familiar choices, a grilled steak topped with fresh cactus — carne asada con nopales.

“I thought it was going to be like one of those chewy Brazilian steaks, but it’s more like roast beef — it melts in my mouth,” he said after dinner arrived. “The cactus has a light, peppery edge.”

Frankie, meanwhile, loved his hefty, cheese-drenched burrito, and I made fast work of three queso-filled enchiladas.

Frankie fell for Angelina’s dessert line, assuming he was going to get a New York-style cheesecake, and was startled to receive the towering wedge of fluffy tres leches cake instead. But, he said, the spongy cake was “very fresh-tasting.”

Diego shocked me by insisting on the fried ice cream. I warned him that it would probably be a rock-hard ball of vanilla ice cream rolled in soggy cornflake crumbs. Happily, I was wrong. At El Patron, the ice cream is encased in a thin shell of chewy toasted coconut.

“It’s really good,” Diego said, “although it doesn’t taste like it ever went anywhere near a fryer.”

But what really impressed him was that Mexican flag. After Stella offered him the cocktail, he quickly downed the contents of the three little glasses and smiled broadly.

“It goes to your head right away,” he said, grinning like a big boss.