Restaurant review: Ron Rico attempts to bring the Caribbean to the Crossroads 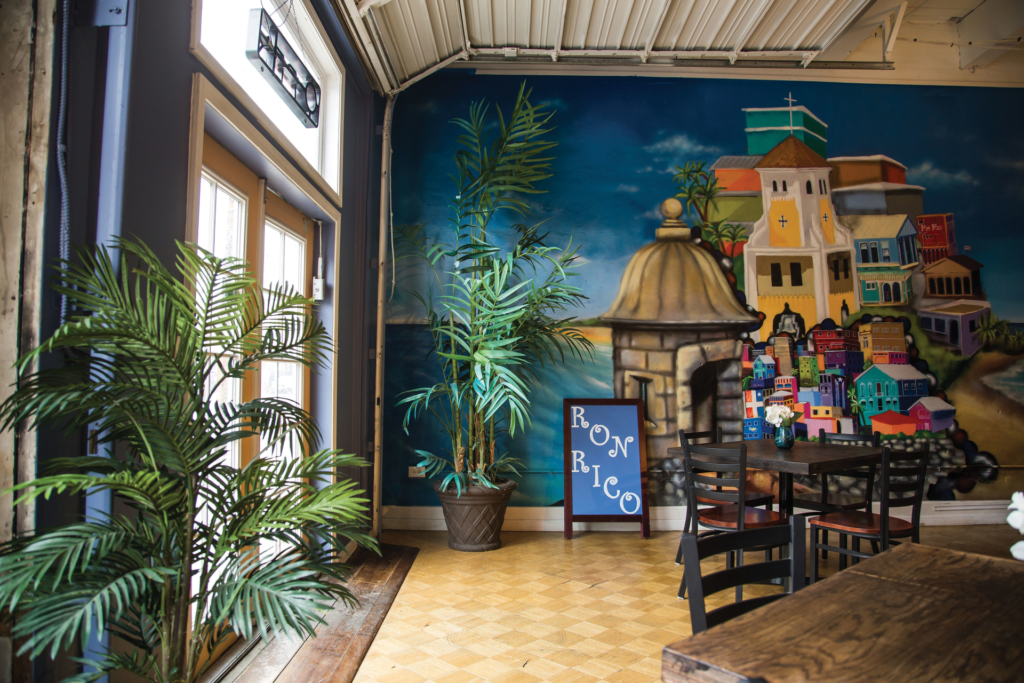 It is a mark of adulthood, I think, to be able to hold in one’s head two ideas that seem in constant tension.

For instance, it is possible to eat at a Puerto Rican restaurant and rum bar that involves no Puerto Ricans. It is possible for that restaurant and rum bar to be called “Ron Rico” but have no relationship with Ronrico®, the bargain-basement rum that tastes like acetone gussied up for the homecoming dance. It is possible to bask in the warmth of a tranquil mural of San Juan while you put money directly into the pockets of a Kansas City-based Republican pollster who works for Jeff Roe, one of the most repulsive political operatives in America.

And it is possible to know all of these things — to eat of the Plantain of the Knowledge of Good and Evil — and still enjoy a meal at Ron Rico.

For many diners, the novelty alone will make Ron Rico worth a trip. Kansas City is short on options for Puerto Rican food, which is one of the reasons brothers Nate and Titus Bond pegged the cuisine for their new East Crossroads eatery. “People [here] didn’t know what Puerto Rican food was,” Nate Bond, the restaurant’s chef, told me by phone.

The Bond bros have collaborated on restaurants for years (they previously co-owned Crown Point Tavern in the Northland and Messy’s Birds and Brews in Midtown and Brookside). But Titus Bond has spent most of that time in the background, working as president of the Remington Research Group, the polling firm that predicted Trump’s 2016 victory in several key battleground states. Chef Nate Bond has been the creative force in the kitchen. 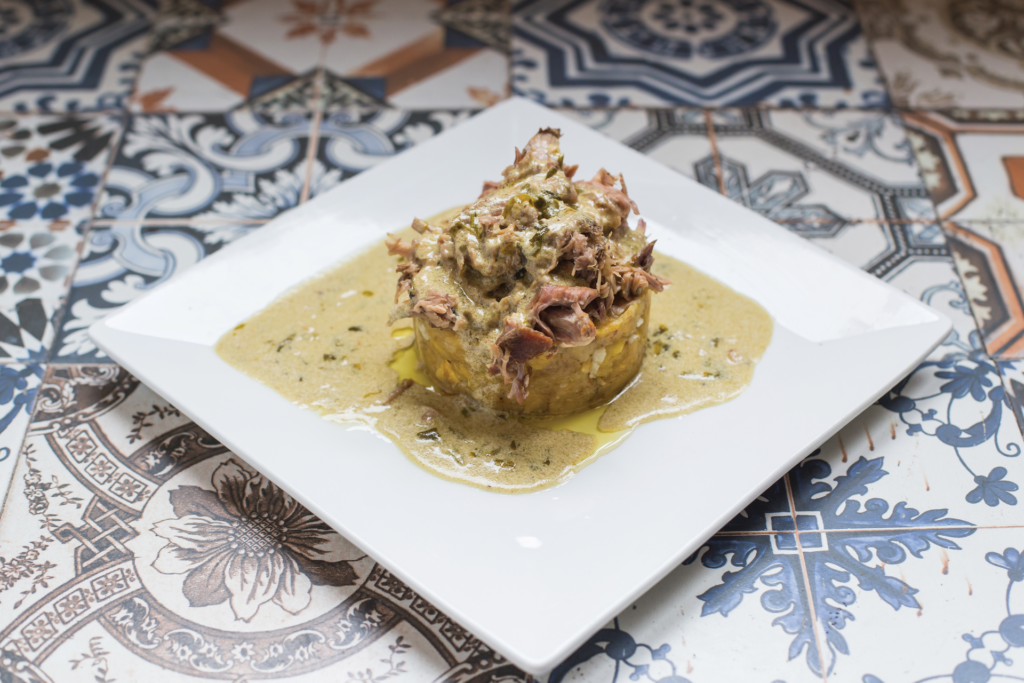 Here, Chef Bond’s menu skews traditional — heavy on the pork, heavy on the plantains, heavy on the tropical fruits. The prime draw is the mofongo relleno, a dish that can be hard to find locally. Bond mashes fried green plantains with olive oil, garlic, and chicharrón and packs them into a fez-shaped mound of savory starch (note for herbivores: the mofongo can be ordered and prepared without the chicharrón). Diners can douse their monument to plantains with one of two sauces — creamy garlic or sweet creole — and top it with churrasco (skirt steak), chicken, shrimp, grilled pork, or veggies.

On my first visit, our server advised me to stick with the creamy garlic sauce. It was the right call. The sauce was flavorful and heavily salted, providing a sharp contrast to the neutral starch. And the plantains were tender enough to sop up every gram.

I was curious enough to try the sweet creole sauce on a later visit; you need not make the same mistake. The watery relish tasted more sweet than creole and had the squeaky texture of food processor salsa.

Another staple? The churrasco and chimichurri, which Bond executes better than anything else on the menu. The thick cut of skirt steak is marinated in adobo, Sazon, soy sauce, and vinegar before a speed date with the grill. When I ordered it, the steak arrived a perfect medium rare, fragrant with soy sauce and lush with acid. The crown of cilantro chimichurri was the only accompaniment I needed — I could have done without the pale iceberg side salad and its anemic hunks of hothouse tomato.

For a bargain pick, order the Tripleta, a grilled sandwich named for a trio of meat that seems designed to test the tensile strength of its bun. Ron Rico’s version is layered like a trifle with generous hunks of roast pork, tender shreds of sofrito chicken, and chubby slices of tender skirt steak. Swiss cheese melts into every crag of Mount Meat, while a sprinkle of shredded cabbage lends it a veneer of respectability. This is a solid sandwich, executed well: each meat adds its own distinct savory notes to the hedonistic orchestra, and the crisp-toasted bun keeps everything contained.

Navigating through Ron Rico’s extensive menu can be a frustrating exercise in near-misses. The masitas de cerdo (chunks of crusted, pan-fried pork) provided a carousel of textures, each crisp-crusted exterior giving way to a succulent morsel of moist pork. But the meat itself was tepidly seasoned, rebounding what ought to have been a slam dunk. The side of arroz con habichuelas (rice and beans) was similarly bland, though the beans were gorgeously plump and tender. The tostones — crisp green plantain chips served alongside most entrees — cried out for a sprinkle of salt. And the carne guisada, a plate of shredded beef braised in red wine, was the Sean Spicer of meals: soft, sweaty, and less interesting than its name would imply.

It was also $18, highlighting another of Ron Rico’s inconsistencies, which is pricing. Sure, some entrees here feel like steals. I’m thinking of a plate-sized Cubano sandwich groaning with supple roast pork, thin sliced ham, and swiss cheese. Bond slathers on enough hot mustard and pickles to cut through the rich flavors, making this one of the more memorable (and meaty) Cubanos I’ve had. The sandwich is $13, but sized to share with a friend (or take a half home for dinner) — and that’s before you consider the small mountain of crisp-battered fries piled alongside it.

Other dishes made me glad The Pitch was picking up the check. I wanted to love Bond’s made-from-scratch pastellilos, the runty cousin of empanadas. The pastellilos de guava arrived handsomely browned with crisp-crimped edges, and the shortcrust pastry was flaky and rich. The flavors, too, were laudable. The gooey edam cheese paired well with a sweet but assertive guava sauce. But on the night I tried them, the pastries were seriously underfilled — and given that $8-for-two price tag, I felt cheated on the cheese. 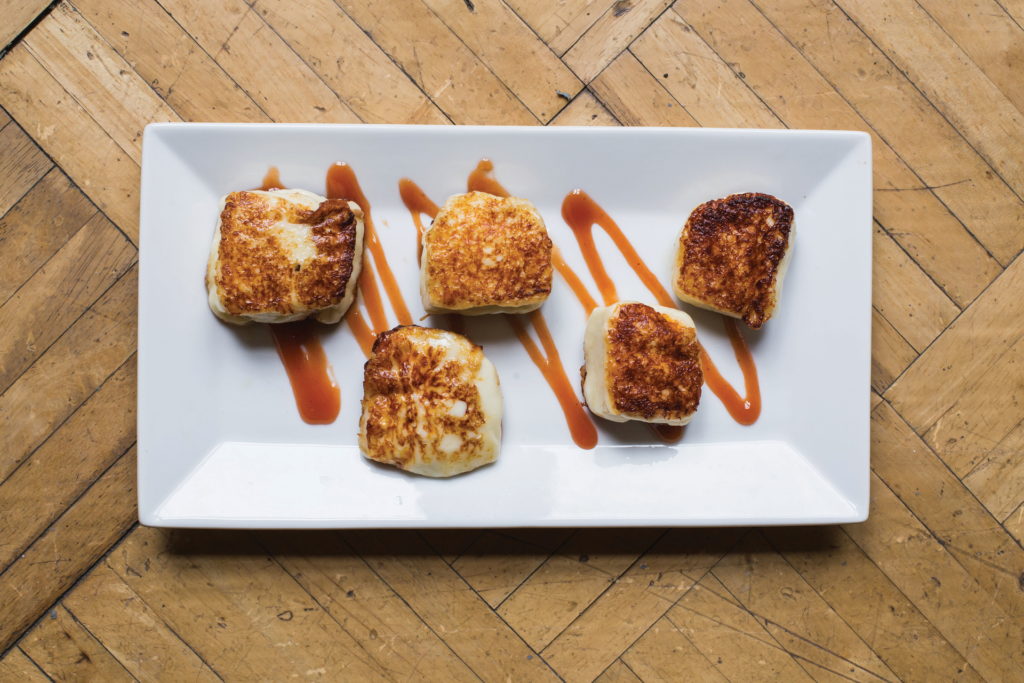 As appetizers go, the queso frito was a better value. This is a dish you learn to love, like the jock in every teen movie who discovers glasses and ponytails aren’t terminal. When it first hit the table, I reached right past it for a sip of my mojito. But then I looked closely: five chubby/creamy slices of queso de frier peered up at me from the plate, their faces toasted a mottled brown. Each was nestled demurely into a convict-orange guava sauce; each was a pleasing bundle of salt and fat and sweet.

That dish may be a good analog for the restaurant itself. For all my surface reservations about Ron Rico, it’s a pleasant enough place to pass an evening. The dining room is festooned with faux palms and rattan lamp shades, the west wall drips with a dreamy mural of San Juan landmarks (rendered by local artists Isaac Tapia and Rodrigo Alvarez), and the drink menu winks at you in cheery Comic Sans.

The drinks on that menu are summer in a glass, provided your vision of summer involves rum and fruit juice. During happy hour, you can score $5 versions of the restaurant’s three batched cocktails — a “Boricua punch,” a piña colada, and a rosé sangria. All three are worth ordering. The Boricua punch had unexpected depth thanks to striations of papaya, guava, pineapple, and mango juices. The piña colada was a dangerously smooth froth of astringent pineapple and rich coconut cream. And the rosé sangria tasted like the Polyjuice Potion for a wealthy JoCo housewife.

According to Chef Bond, the most popular drink is the “classic mojito,” which the restaurant recreates faithfully. The citrus, mint, and cane sugar are well-triangulated, and the drink is smooth without skewing too sweet. But popular here seems relative — on all three of my visits, the restaurant was quiet, with only a scant handful of tables. On one visit, I was the only diner at all.

Despite its too-timid seasoning, Ron Rico has a few hits that ought to gather a crowd. July heat cries out for fruity drinks and Caribbean flavors, and the restaurant may soon get the fans it deserves. As to its long-term success? You’ll have to ask the pollsters.

Order the mofongo de relleno with churrasco and creamy garlic sauce. If you like piña coladas…you know the drill.