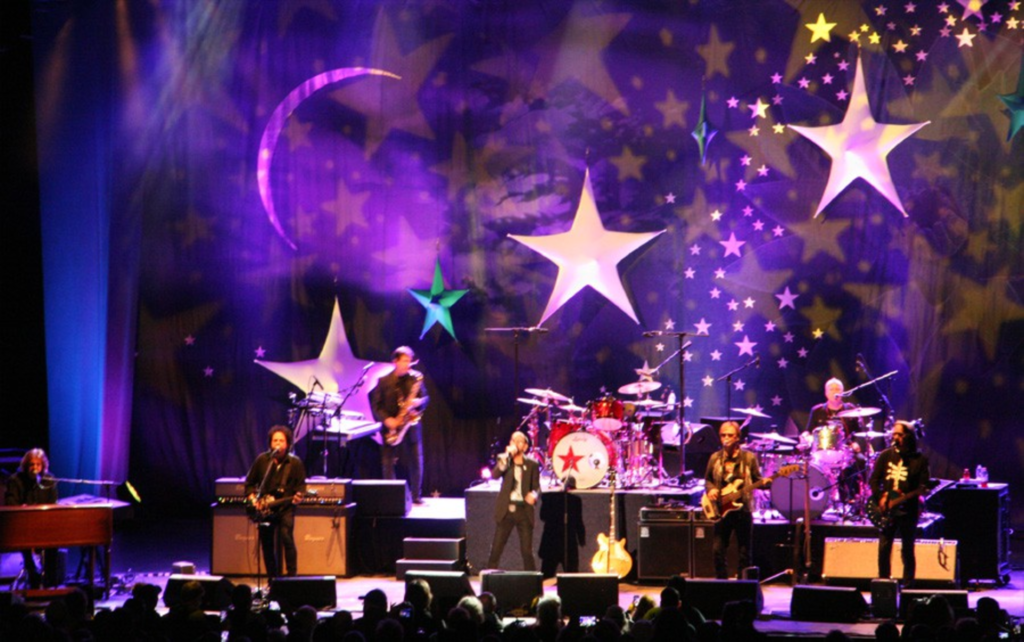 There’s a lifelong theory my friends and I have regarding Ringo Starr: No matter who your favorite Beatle may be, everyone loves Ringo. It’s a theory buoyed by the fact that his All-Starr Band is, really, quite loaded with stars.

Not A-list stars, obviously, but the chance to hear Santana songs by Gregg Rolie, Toto tracks with Steve Lukather or Richard Page doing Mr. Mister songs is a pretty appealing prospect when it’s part of a show with Ringo Starr and Todd Rundgren.

Last night’s show at Starlight was a soft-rock cornucopia, set against a swirling stage backdrop of stars. It was pretty chilly, as well, meaning that dancing and clapping served a dual purpose of keeping blood circulating. Although, most people were dancing and moving because they were excited as hell. Saturday night and “Rosanna”? Absolutely — who gives a shit if you’re wearing mom jeans? This is fun.

You learn a lot after being raised on classic rock. Personally, I found myself saying a lot of things last night I never thought I’d utter at a concert, like, “That dude from Toto can really wail on the guitar” and “Fuck yeah, ‘Broken Wings’!”

Starr and the band cracked more jokes about the weather than one would’ve thought possible. Immediately after the opening cover of Carl Perkins’ “Matchbox,” Starr quipped, “I know four minutes from now, I’ll be buying everyone’s overcoat off ’em,” while Rundgren was pondering, “I don’t know who’s crazier — us for playing the show or you for buying the tickets.”

The show was fun, start to finish, be it Rundgren running along in the crowd, during the extended jamming at the end of “Rosanna” or Ringo cracking up in the middle of songs at something one of his bandmates would do (or a woman throwing a shockingly large pair of underpants onstage). It didn’t come across as unprofessional — more the mark of musicians enjoying what they do.

The Ringo Starr concert experience these days is one of those classic-rock package tours, but with Beatles covers. The All-Starr band rocked a loose party vibe, like an insanely overqualified bar band that knows how to do every classic-rock hit you can think of (because they wrote them).

Starr moves like a man half his age — actually, that’s a lie because I’m half his age and nowhere near as nimble. However, the best moments came when Starr hopped behind the kit and the drums doubled up (and occasionally trebled, with Gregg Bissonette on auxiliary percussion), because the sound was massive. As Rollie took the frontman duties for Santana’s “Evil Ways,” it sounded like a full conga line of drummers was making its way through the amphitheater.

Speaking of Rundgren, I kind of want to see him solo now. I came away from the show with an impression of him not only as a ridiculously talented musician but also as a legitimately clever dude, introducing “Bang the Drum All Day” with “May I take your order? Would you like the chicken or Kobe beef?”

“Honey Don’t,” the Carl Perkins classic, wasn’t exactly rockabilly fun but more like MOR meets boogie woogie, proving that not everything in the show was as well-done as it could be. Granted, for all the covers — Toto, Carl Perkins, Mr. Mister, Santana, and otherwise — people come to see a Beatle because they want to hear songs from the Beatles, and they got that as well. Starr played with that perception, introducing a cover of the Shirelle’s “Boys” as “a song I used to play with that other band I was in. Yes: Rory Storm & the Hurricanes.”

After that, the show rocked quite a few songs from his “other” band, all of which were massive sing-alongs, especially “Yellow Submarine” and “A Little Help From My Friends.” The concluding version of the Plastic Ono Band’s “Give Piece a Chance” went on a bit long — it’s one of those songs which, much like “Hey Jude,” can go interminably — but it was a joyous end to a raucous evening.