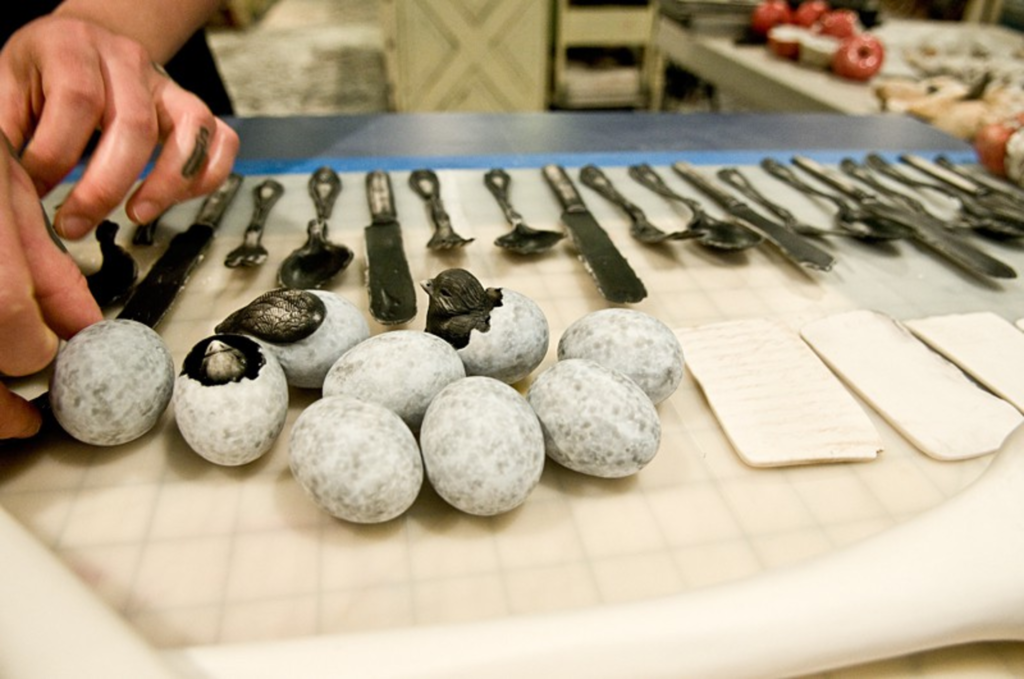 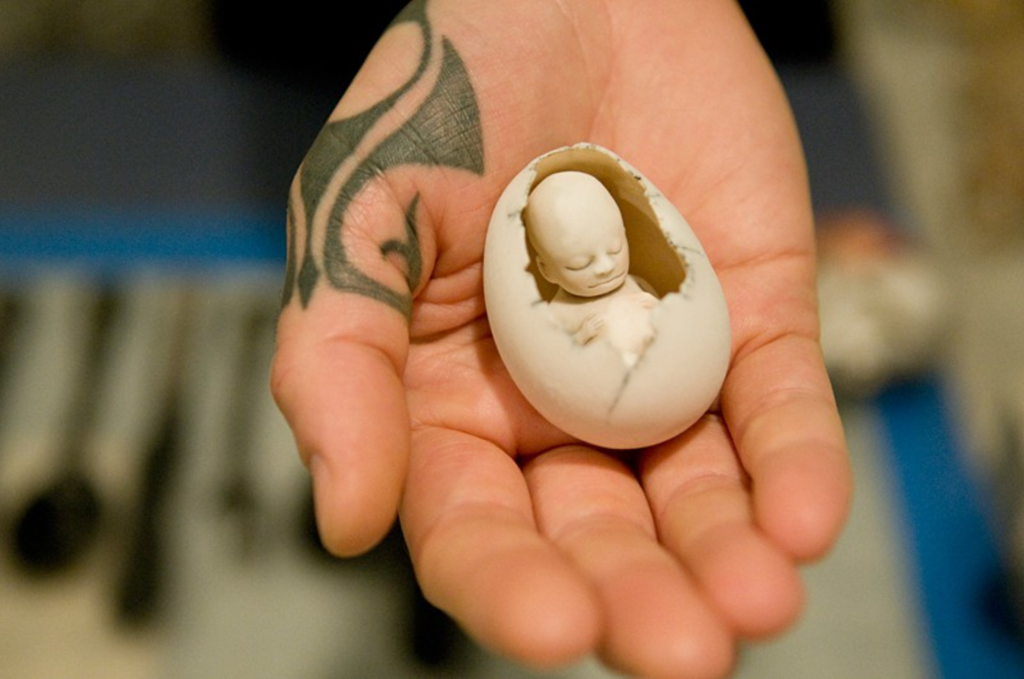 Forever. That’s how long sculptor Renée Cinderhouse says she has been working on her new installation, Manifest Destiny.

For months, she has built molds and cast objects. Over the past few weeks, she has been on studio lockdown, pulling 30-hour shifts while the kiln burns away. This show, scheduled to open September 7 at the Charlotte Street Foundation’s La Esquina gallery, marks the most ambitious endeavor yet in a two-decade career, during which the Kansas City Art Institute alumna has exhibited in New York, Florida, Texas, California and elsewhere. For Manfiest Destiny, she’s firing artifacts for a ghost history of the human race.

Inside La Esquina, she’s building a forest of context for her sculptures, made of 14-foot “pages” culled from Victorian naturalist drawings. Viewers pass through a corridor papered with encyclopedia excerpts, among the first of which is an entry on John L. O’Sullivan, the newspaper editor who coined the phrase “manifest destiny” in the mid-19th century.

You’re not old enough to remember 1839 but, as Cinderhouse’s installation reminds you, you’ve been there.

There had been an economic downturn, fueled in part by the fact that U.S. banks had overextended credit. Immigration and birth rates were up as the country’s population exploded (from 5 million to 23 million over the 50 years starting in 1800). As abolitionism grew, so did political divisiveness. And the story was being recorded by the likes of O’Sullivan, who wrote in 1839: “Yes, we are the nation of progress, of individual freedom, of universal enfranchisement … [moving] onward to the fulfillment of our mission — to the entire development of the principle of our organization — freedom of conscience, freedom of person, freedom of trade and business pursuits, universality of freedom and equality.”

Back then, manifesting the country’s destiny meant killing off or converting American Indians. Mexicans were in the way. Women could not vote. A black person who was not a slave was counted by the Census as three-fifths of a person. But narratives forged by O’Sullivan and his peers largely disregarded these facts as obstacles to a great Christian end.

The dialogue today, Cinderhouse says, is about cultural dominance rather than geographic expansion. (The Mars rover notwithstanding, there’s nowhere else to go.) But again, the impetus and justification seem to be God’s plan, not necessarily the people’s will. So the living storybook of Manifest Destiny is her attempt to remake a frozen set of scenes amid a forest. The plants represent the time in America’s story before the narrative of “We the People” was usurped by a mass media whose perspective, as Cinderhouse writes in her artist’s statement, “is not necessarily the opinion of the majority.”

She has wrapped the gallery in black, velvety cloth, darkening the space into a memory­scape decorated with those encyclopedia pages, pieces of our oral-history, pre-Internet­ collective knowledge. Oak leaves, made from the same, litter the forest floor; visitors are meant to wander through and look in on vignettes inspired by natural-history-museum dioramas. (The ghost history has a living narrator this weekend, when actor Ron Megee performs.)

Some of Cinderhouse’s hand-finished porce­lain sculptures reference genetic engineering — biodiversity’s destruction at the hand of blind profit. Corn, steered for centuries into human-usable versions, here becomes “One Corn,” a patented product invading heirloom fields. Apples, usually the symbol of humankind’s fall from grace, here tells another story: Westward expansion following Johnny Appleseed, and settlers planting trees and sticking around to see them grow, and a bitter fruit once used to make hard cider rebranded as a healthy snack.

Her installation holds up axes (to reference the temperance movement’s zealous smashing of liquor barrels, the cutting of virgin forests to make way for settlement, other things) and also displays human femurs and 12-week-old fetuses. There are books, cards, a few chickens, dinnerware — all impossibly delicate and fragile, frozen like fossils.

Cinderhouse has invited artist acquaintances from around the country to participate as the exhibition continues, their performances interspersed with the installation. She wants Manifest Destiny to be a unified experience, for there to be no separation between audience and art. “It will be as if someone got out an instrument after dinner,” she says, “and just started playing on the porch or in the drawing room, for example.”

She says she chose the music based on what she listened to while working on Manifest Destiny. The musicians play instruments familiar from folklore: ukulele, autoharp, bowed banjo, cello. Reverend Glasseye is set to lead off on First Friday, with the act Victor & Penny filling the space September 15. For closing weekend (September 28–30), there are three ticketed performances by the Denver Broncos UK. Different, well-known local bands open for the Broncos each night.

She wanted to explore how music, art and theater could express the same things in a single space, centered on a symbolic narrative. The effect is a bit surreal, built on dream logic — and not built alone. Héctor Cinderhouse, Renée’s husband, handled the two-dimensional design work and the calligraphy for the show’s personalized thank-you pages. Other artists earned those thank-yous, too, including Rachel Eilts and Nate Bogart; they join a list of Kickstarter supporters whose pre-sale contributions helped cover material and performers’ costs.

For Cinderhouse, though, there’s something more at stake than scale and cost. She says it’s the artist’s role to show us how to change the cultural conversation. With Manifest Destiny, she has set out to rewrite what can’t be unwritten. And it’s taking shape.