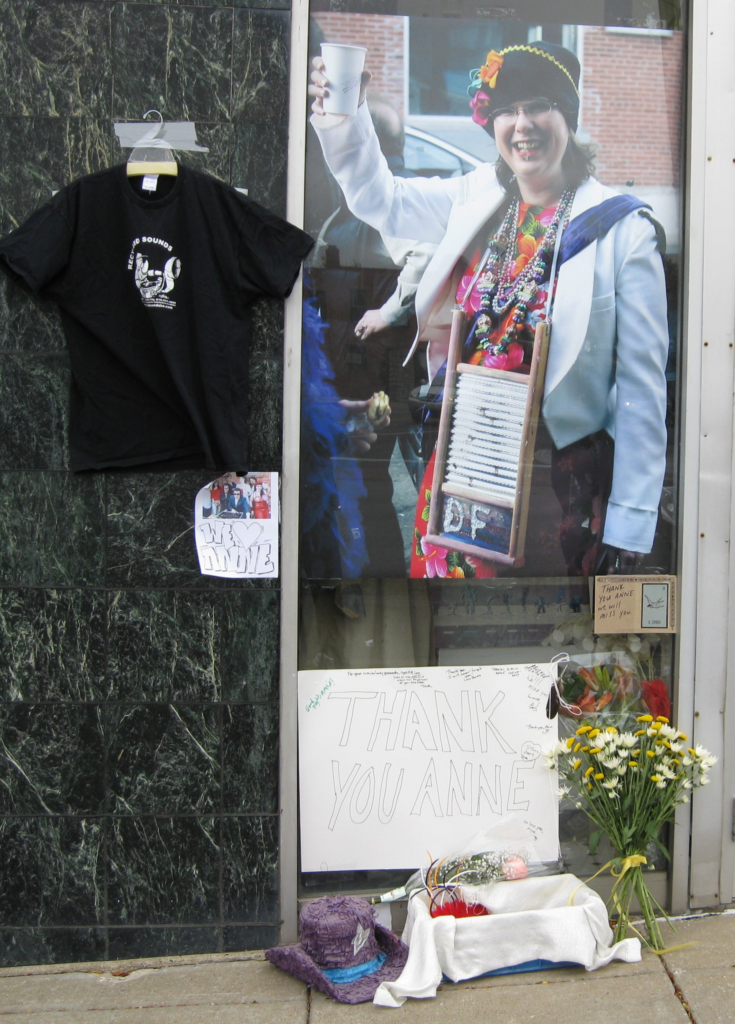 The day began with a halt.

The news of Anne Winter‘s death on Thursday, October 22, at age 45, spread through phone calls and Facebook updates. Beginning that night, her closest friends began posting expressions of loss. From there, it spread like an outbreak, and the whole music scene seemed to shut down.

For 18 years, Winter and her husband, Kurt Von Schlemmer, owned and operated Recycled Sounds, the midtown record store and gathering spot. When they closed the store in 2006, she said it wasn’t because it had become unprofitable. Though digital music certainly had taken a chunk out of sales, the place was still providing them a living, Winter said. She and her husband just needed a change.

The store’s closing was sad but not devastating. Winter would still be around, going to shows, buying CDs from the merch table, supporting the music of this town as she always had.

“You employed fully 2/3 of everyone I know at one time or another and you gave a damn when no one gave a damn,” Architects singer Brandon Phillips wrote on Winter’s Facebook wall.

“I still have many of the records and CDs that I bought at Recycled Sounds. Many are part of my primary repertoire,” wrote musician Bob Parks. “Maybe one day I can get around to showing a list of all that I bought. Maybe that will help me understand the profound impact on my life and share it with someone else.”

At 2:30 Friday afternoon, Parks taped up Winter’s picture in the old shop window. Brady Vest of Hammerpress added a card; others placed flowers or signed a posterboard plaque. In the picture, Winter was dressed in a white tuxedo jacket, wearing beads and a silly hat, a washboard hanging from her neck. It had been taken when she was named Queen of Mardi Gras one year at the 18th Street parade. On last week’s cold Friday, her smile and raised cup shot out toward Westport in frozen valediction.

“It’s so much of a hello and a goodbye all in one,” Parks said.

“I used to go to the register [at Recycled Sounds] to buy other things, and she would pull out things that she had ordered for me,” remembered musician Keanon Liggatt.

“Every year, no matter how slow it was, we always got a bonus,” said Phil “Sike Style” Shafer, who worked in the shop.

“Taking money from your pocket and giving it to musicians to record music — that’s a trustworthy act,” Liggatt added.

I heard so many stories of how Winter had taken in Kansas City’s gawky, wayward suburban youth and fed them musical manna. As teenagers in the ’90s, they came to her store hopelessly nerdy, pre-braces, pimply and fat, and she showed them the Replacements. Later, as almost-adults, she gave them DJ Shadow.

At 18, John Bersuch brought in copies of his band’s first CD, terrified of the woman at the counter. But fear turned to something like unconditional love as Winter accepted his offering without a hint of the crankiness another shopkeeper might have unleashed. A week later, she called him — called him — to let him know she’d listened to the CD and liked it. His dream of becoming an underground rock legend was validated.

Later on Friday night, mourners gathered at what became a spontaneous memorial for her at the Rime Buddhist Center. And afterward, folks gathered at Chez Charlie on Broadway to talk, drink, dance and remember.

The place was packed all evening, with people in heavy coats streaming through the front door every time you looked up.

Jimmy “Superwolf” Trotter and his friends were spinning old funk and soul. Trotter had stories, too, including how Winter was pissed at him for months when he went to work at the Music Exchange shortly after leaving Recycled Sounds. A notoriously good record dealer, Trotter also told of how not long ago, at the Record Bar, Winter had made him get up and tell everyone in the bar about the four times he’d ripped her off the most. As he talked, he was grinning ear to lupine ear. “Anne was always fair to me,” he said.

Dudes talked about how they had met their future bandmates at Recycled Sounds. About how great those in-store shows and cookouts were, about the wild concert trips for which Winter had chartered buses. Many people said they’d spoken to her within the past month or week. Everything had seemed normal. Who could have known she would take her own life?

Even those of us who knew her more by reputation than personally could feel not only the loss but something else — something good in that moment, at least.

Maybe it was just that people were listening to one another for a change. Just shutting up, leaning in and listening — the purest act of being with another person.

That was how Anne Winter listened.