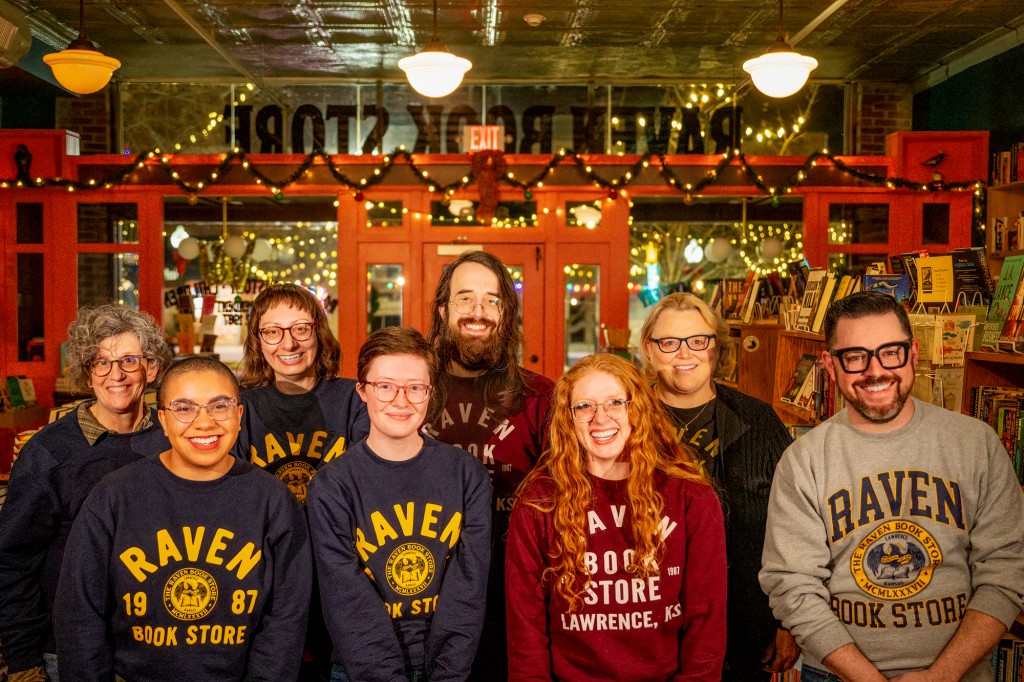 Raven Book Store’s next chapter starts with fresh leadership. Danny Caine, co-owner of the Lawrence bookstore, sold half of the company to seven of its employees, effectively splitting ownership with the individuals who help run it every day.

“These are the people who are at the core of the Raven,” Caine says. “They’re running a lot of the store on the management level, or they’ve been here for a very, very long time. The eight of us have 70-plus years of experience at the Raven, so it’s just a lot of institutional wisdom, and that’s the heart of the store, right there. It’s not a building. It’s not a collection of books. It’s those people working for 70-plus years, cumulatively.”

Caine says the team is a sound group to lead Raven Book Store into the future. He was inspired by a Cambridge, Massachusetts bookstore called Porter Square Books, which saw a similar leadership change a few years ago.

With the framework for an employee-owned business already established, Caine felt he should follow that model to make both the Raven and Lawrence better. Selling 49% of the Raven was about giving the store to the dedicated individuals who care more than anyone else. The sale was also done to diminish the notion that it’s okay for retail and bookstore workers to be exploited.

“In retail in general—and also in bookselling—there’s this reputation that I don’t agree with: that you do it for the love,” Caine says. “It’s like, ‘You’re a bookseller; you’re never going to make much money. But it’s OK because you get free books, or you get to meet authors.’ I didn’t like that. It seemed like a way to exploit workers, and I wasn’t interested in doing that.”

Luxem says the co-owner role is already leaving him with a more rewarding experience. Since Caine originally approached the team with the idea to create an employee-owned environment, the Raven crew has worked together to achieve the same outcome seen at Porter Square Books.

“It was definitely inspiring to know that things can work this way, too,” Luxem says. “It doesn’t always have to be the hierarchy of one person on top and then everyone below. You can expand that out and bring in some equity to people. We all want to make sure everyone is treated well here and has equitable experiences and access to everything.”

Luxem adds that he wouldn’t mind seeing other stores in Lawrence follow suit. He says that the budding concept of employee ownership has room to grow but will only reach its full potential so long as other businesses are paying attention. The Raven’s potential butterfly effect remains to be seen, for now.

While some effects of the Raven’s shift—such as projected positive trends in profits and worker motivation—won’t be felt for months or even years, there are some immediate changes to take notice of. Children’s Section Manager Bracciano can already feel the impact.

“When I think about the choices that I make in my work and the people who I’m impacting, knowing that I can say, ‘Yeah, I’m an owner.’ It’s kind of cool,” Bracciano says.

Pushing to make such a drastic structural at the Raven is quite the bold move, though those familiar with Caine’s work won’t be surprised to hear his stance. He published a book called How to Resist Amazon and Why in 2019, covering how consumers can push against Amazon’s dominance and instead support their local, small businesses—all while platforming an open letter from Caine to Amazon founder and chairman Jeff Bezos.

Effectively selling half of Raven Book Store to seven employees is a small step toward correcting a mindset instilled in generations of retail workers. These employees can have a future in bookselling thanks to the shift. Caine says five other stores have already reached out—and he hopes there will be more.

“If it creates a domino effect that’s wonderful. I think, nationwide, workers should be getting more equity in where they work,” Caine says. “It should be easier to make a career in this industry. Working retail for a small business doesn’t need to be seen as a place where you’re not going to make money, or a dead-end job.”

This team mentality is baked into the Raven’s structure, representing a stark change from the usual “lone wolf” mindset found in many small businesses. Caine says he’s confident the Raven will have a place in Lawrence for a long time thanks to the flexibility the decision provides.

“I believe a good bookstore can be the heart of a community,” Caine says. “Having a thriving and active bookstore in a community is really good at so many levels, from providing literary programming, to jobs, to donating books, to helping schools and libraries order books.”

Editor’s note: This story was updated in the February 2022 issue of our magazine.