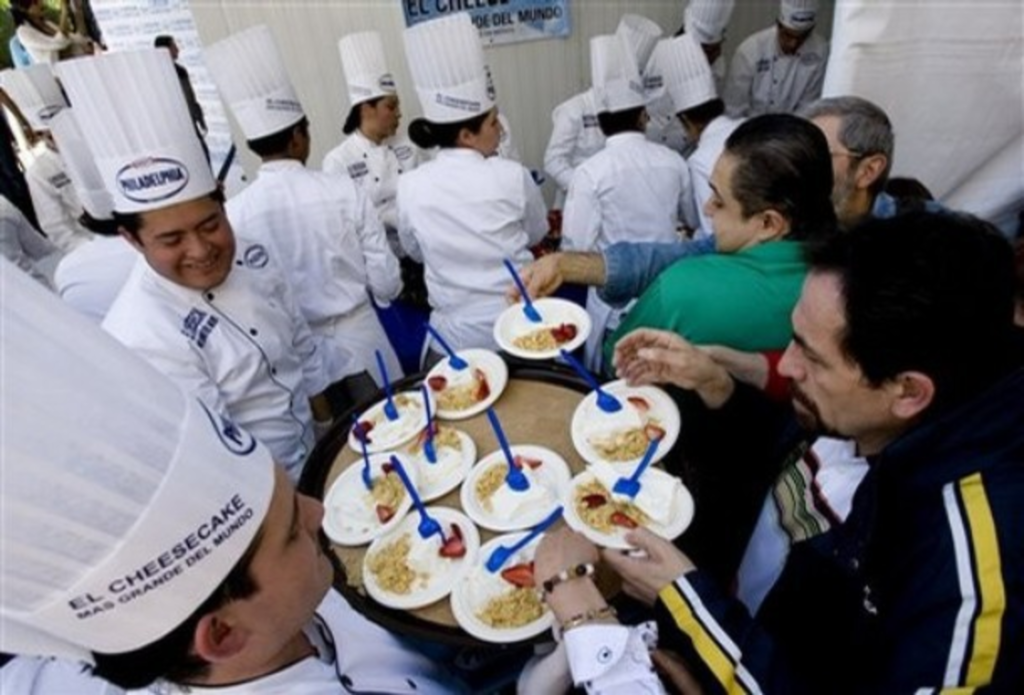 When you hear the words Mexican food, what images come to mind? Margaritas, fajitas, peppers. Probably not cheesecake. Yet Mexico now holds the record for largest cheesecake which was made using… Philadelphia cream cheese.

Spanish news is reporting that Chef

Miguel Angel Quezada of Mexico City has made a 2,000 pound strawberry cheesecake beating the record of, uh, um, well there is no record. According to the AP, “there wasn’t much competition. Guinness had no previous record for cheesecakes.” Not only did they just make up a record, but the record lies outside the city of Philadelphia. It’d be as if the title of world’s largest burnt-ends belonged to Vancouver.

Philadelphians should be mad. There’s nothing wrong with Mexico City chefs having the gumption to try to make the world’s largest cheesecake. Judging from the pictures they did a pretty good job. But the fact that Kraft helped them achieve the goal is a little odd. As one commenter put it, “we’re in a serious recession, guys. This is no time to start

Call your congressman today and demand they put world’s-largest-cheesecake in the stimulus bill. Not only will it create jobs, but it will lead to lots of delicious cheesecake.

In case you were wondering, there is no Guinness record for largest burnt-ends. The closest category would be that of world’s largest barbecue which is held by Uruguay and involved 13 tons of asado. That’s nearly half-again as much meat as in the entire American Royal.