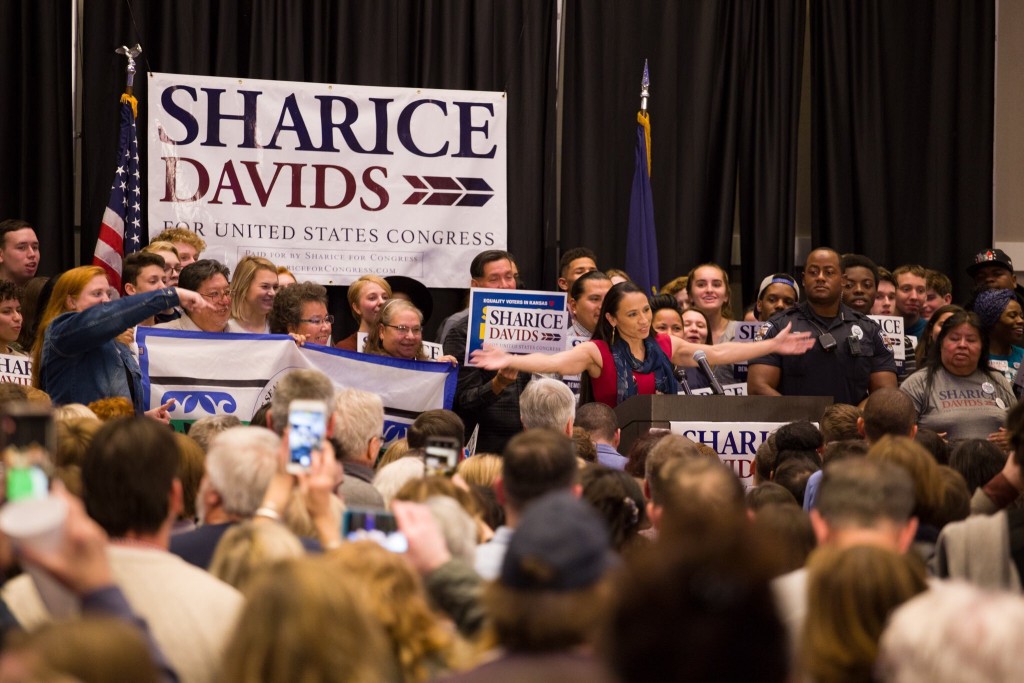 The Presidential election remains up for grabs, but local results in Kansas and Missouri have come in.

Civic enthusiasm has risen across both states. Kansas produced a new statewide record of over 813,000 Kansans voting in advance according to the Kansas Secretary of State’s Office. The Kansas Secretary of State’s Office also reports that 100,000 new voters registered for this election compared to 2018. Still, Kansas City voter turnout was under 60%.

It’s no secret that Kansas hasn’t voted blue since the 1964 election of President Lyndon Johnson. As ballots continue to be counted, the state shows a wave of red with few dots of varying shades of blue. Douglas and Wyandotte counties show medium blue, while Riley, Shawnee, and Johnson County are lighter. The small Southwest Haskell County was an anomaly earlier today when their first 146 votes cast were all for Biden. Missouri follows suit as all red minus Jackson, Boone, and St. Louis counties.

Republican Missouri Gov. Mike Parson was re-elected as the state’s chief executive, defeating Democrat State Auditor Nicole Galloway. Parson faced a tough election with a dip in response ratings due to his handling of the coronavirus pandemic. He was one of the last governors to issue a state-wide stay-at-home order, and never issued a mask-wearing mandate, seeing it as important “to leave it up to locals.” Both Parson and his wife, First Lady Teresa Parson, tested positive for the virus in late September.

Galloway, the only woman and Democrat holding statewide office, centered her campaign around Parson’s response to the virus. Though it wasn’t enough to give her the winning votes, she reflected on the driving force behind her campaign in her concession speech. “Over the course of this campaign, we built a coalition of Missourians that were united around values,” said Galloway, “that we can no longer ignore science and the growing threat of COVID-19.”

Parson didn’t mention the virus in his victory speech but continued to push his hands-off approach to pandemic mandates. “I believe people believe in common sense and I think they want leaders who believe in common sense,” said Parsons. “They don’t want the government to tell them what to do every day. They want to live their lives in peace, and as long as I’m governor we’re going to do those things.”

This will be Parsons’s first full term as an elected Missouri state governor.

The first transgender representative in the Kansas state legislature, Stephanie Byers. A Chickasaw Native American, Byers is believed to be the first transgender person of color elected to office anywhere in the United States. Prior to running for office, Byers taught in Wichita public schools for 29 years and was named the GLSEN National Educator of the Year. “Stephanie shattered a lavender ceiling in Kansas and its impact will reverberate well beyond the borders of the state,” stated Annise Parker of LGBTQ Victory Fund in an article from PinkNews.

Republican Tracey Mann was elected as a congressman for Kansas’ 1st District, defeating opponent Democrat Kali Barnett. The former lieutenant governor campaigned for removing coronavirus restrictions to help the U.S. economy. Mann also hopes to change the U.S. immigration system to help bring more workers to western Kansas, though not until after addressing the issue of border control. Mann says he has been promised a spot on the House Agriculture Committee by Republican congressional leaders, allowing him to, “go to work to advocate for our farmers and ranchers in Washington.”

Republican Jake LaTurner won the 2nd Congressional District in eastern Kansas, defeating Topeka mayor, Democrat Michelle De La Isla. A Galena native, LaTurner grew up in a family that struggled financially and was on welfare. LaTurner plans to focus on a “common sense” government that will cut taxes while also assuring citizens a safety net. De La Isla’s campaign centered on expanding Medicaid for low-income residents. LaTurner opposes the Affordable Care Act, wanting to keep protections for preexisting conditions. The race garnered national attention after runner Steve Watkins, Republican Congressman, was charged with voting-related felonies before the primary election. Watkins believes this charge was politically motivated. The next court date in his criminal case is Dec. 3.

Republican U.S. Rep. Ron Estes was reelected in Kansas’ 4th District, making it his second full term in Congress. He defeated Democratic runner Laura Lombard, who ran unsuccessfully for Democratic nominations in 2017 and 2018. At a Wichita watch party, Estes stated, “Unfortunately the last few months we’ve had a lot of politics, a lot of partisan activity related with the election and once we put today behind us, we need to move forward, we need to get back together and work on things that are better for Kansas and better for the country.”

She also used her platform to honor Michael Brown after her election. Bush led protests in 2014 after police killed Michael Brown in Ferguson. She stated, “We took to the streets for more than 400 days in protest. Today, we take this fight for Black Lives from the streets of Ferguson to the halls of Congress. We will get justice.”

The remaining seven congressional seats were unchanged, with all incumbents winning reelection. The closest race was between incumbent Republican Rep. Ann Wagner and Democratic state Sen. Jill Schupp in the 2nd District in St. Louis’ suburbs. Winning by about seven points, the Associated Press stated the race for Wagner as the narrowest victory in the Missouri congressional delegation.

Missouri Amendment 1, Set Term Limits for Officials, failed to pass, sitting at a close call with 48 percent voting yes and 52 percent no. The passing of this amendment would have extended the two-term restriction that currently applies to the Governor and Treasurer to the Lt. Governor, Secretary of State, Auditor, and the Attorney General.

Amendment 3, Change Redistricting, Lobbying, and Campaign Finance barely passed with 51 percent voting. This amendment is passed will reduce the number of campaign contributions that candidates for state senator can accept, prohibit state legislators and their employees from accepting a gift of any value, and modify the criteria for redrawing legislative districts and change the process for redrawing state legislative district boundaries during redistricting, as stated by the Missouri Secretary of State’s office.

The highly discussed Question 1 from Jackson County barely passed with 51 percent voting yes. Data shows that most 911 calls are made by cellphones. The question offers an update to the current 911 funding mechanism, which is supported by a 7% landline surcharge, as stated by Jackson County’s official website.

There will a one-dollar fee that will replace the current funding mechanism, not be in addition to it. The fee is based on each line, so if a household has multiple lines they will be assessed a fee of up to $1.00 for each line every month. It will also provide tax relief to landline users by decreasing their monthly fee from a 7% surcharge to a maximum of $1.00 per line. This will go into effect beginning April 1, 2021.

Question 2 regarding the removal of Andrew Jackson statutes failed to pass with 72 percent opposed—truly, an embarrassing moment for us.

After Trump loss, replace populism and pity parties with persuasion and pragmatism

An adjusted holiday season and the sacrifices on the table

What the Biden presidency means for women's rights