Phox at SXSW: “No one is getting their way in this band” 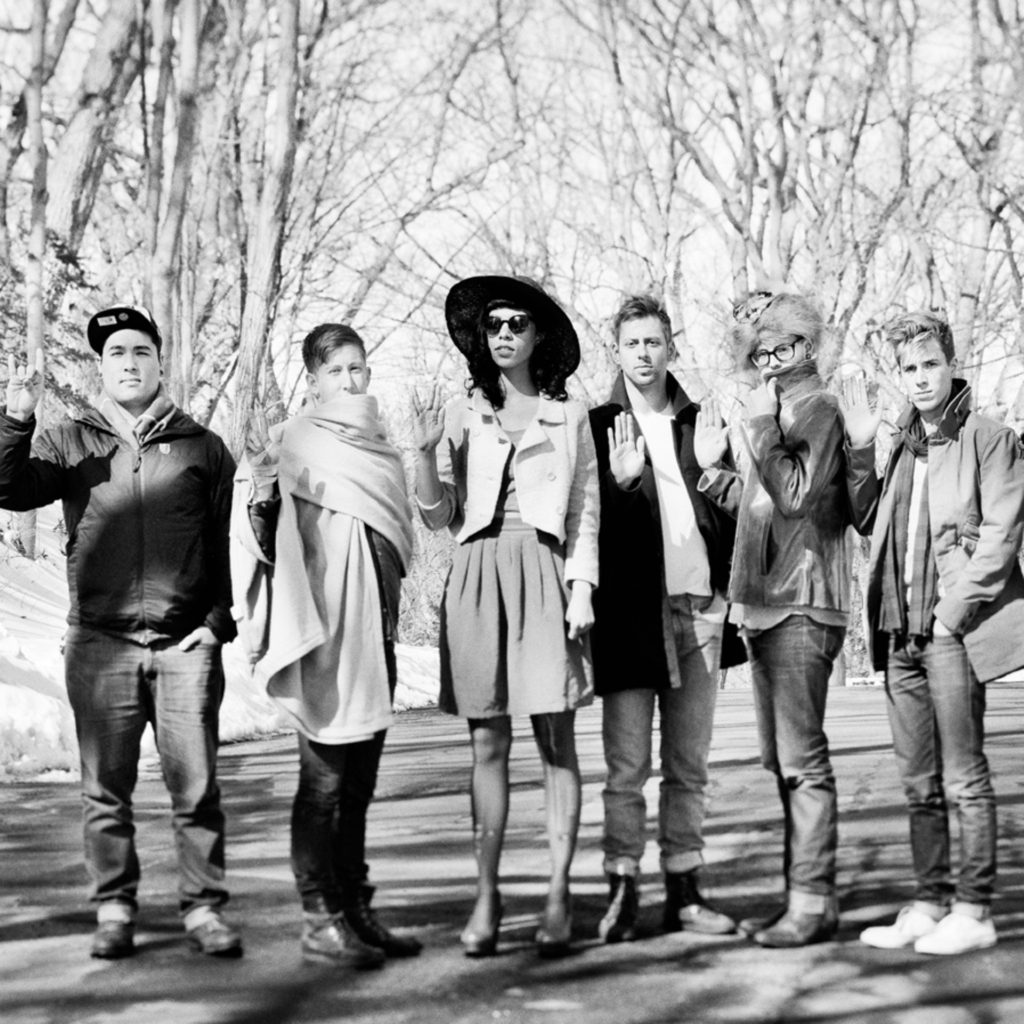 Just a few weeks ago, the seven-piece Phox signed to Brooklyn label Partisan Records, home to the likes of Deer Tick, Heartless Bastards and Dolorean. This is a big step for the two-year-old Madison, Wisconsin-based band, and a well-earned accomplishment. The band’s debut EP, Friendship, showcases lead singer Monica Martin’s sultry, smoky jazz-singer vocals beautifully against a lush, glittering pop background that includes a few surprise elements here and there – notably, trumpet and banjo.

By Friday afternoon, I felt at home with SXSW. My brain had caught up with the idea of the experience, my sunburnt nose was already peeling, and I was ready to take advantage of some of the downtime that I usually found between day parties and official nighttime showcase. I’d been meaning to catch a set from Phox at some point, and made arrangements to do a quick interview with band ahead of their gig at Mohawk on Friday night.

From the artist area on the balcony of the Mohawk, Martin and drummer Matt Holmen chatted with me about the Partisan deal and interband relationships. Martin and Holmen are not dating, for the record – they did once, and are not now, and asked me to clarify that specifically.

The Pitch: You have a really unique sound, especially considering your location – Madison, Wisconsin, which isn’t exactly known for its pop music. Tell me about where your style comes from and how you developed it.

Holmen: Madison is where the music is in Wisconsin, and it’s a lot of punk and hardcore, and then the bulk is singer-songwriter stuff. It wasn’t like we went ahead and were like, “Let’s fill this gap,” but none of our interests are in those genres. So, coming from a bunch of different backgrounds and coming from a small town – we’re from Baraboo, which is really small. We just moved to Madison in the last couple years, she’s [Martin] been there for a while. But just kind of having a small-town, kind of hum-drum Midwestern upbringing – it forces you to think outside of a scene or a box.

Martin: And because of that [sound] not really being present in Baraboo or Madison, people have been so, so warm about the group. I don’t ever think about the differences [in our kind of music], I guess, and what we’re offering to the music scene.

You guys are getting some traction and press lately, especially following your signing to Partisan. Do you have any fears about sustaining such a large group with so many members?

Holmen: Nobody is expendable. Nobody is on stage playing a shaker. We don’t have a tambourine guy. Everyone is a part of the sound, even if it doesn’t come across in our performance, just the atmosphere and creativity that everyone provides and the writing process – changing one element would change the whole chemistry. It would just be wrong.

You’ve known all of your bandmates for such a long time – some of them since elementary school. Childhood friends, for the most part. But you’ve only all been playing together for two years. How has being in a band influenced your relationships with these people?

Martin: It’s interesting, because you spend time with that many people, and it’s rare that you get into the intimate type of conversations that you would if you were in a band with just one of these people. So you’re sharing this experience, and then there’ll be a day where three of us will be out to lunch and the others will go somewhere else. You get to peel back the layers slowly. I feel like knowing someone is so much more than understanding how they’re reacting to something on any given day. It’s so much more than “How was your 10th birthday party?” or whatever.

Holmen: In creating stuff together – in creating videos together – we have this way of creating parodies of each other. We’ve turned each other into characters in our minds. Matteo [Roberts] can be Tito one day, which is his Hawaiian shirt-wearing, pina colada-drinking self, or he can be Trou, which is sort of his computer, internet-dwelling troll character. We made a video a year ago, just after South By, called “Post-Traumatic Confetti Disorder,” and it’s just this little reaction to ourselves about how we had changed throughout this process, and how as much as we’ve gone through throughout this whole process, J. Sean [Krunnfusz] still loves his video games and giant two-liters of Diet Cokes. We just get to parody each other.

Post-Traumatic Confetti Disorder by PHOX from Elder on Vimeo.

[page]Martin: I guess my short answer, now that you’re saying this – it’s funny how bands can develop this inside, insular comedy. Almost when we step out and interact with other people, you can tell how those interactions are different. When you try and talk to someone else, your humor becomes different. It’s not funny to someone else.

Holmen: Everyone gets band psychosis. Everything’s an inside joke.

I read something about how you guys don’t have any inter-band relationships. Is that a rule? Do you guys have any band rules, things you’ve discussed and set in stone?

Holmen: We’ve never had to make rules for each other. I think at this point, we all know each other intuitively and well enough where you know the shit that make things go sour. Maybe for an afternoon, maybe for the rest of your life.

Martin: I’m probably the biggest sexual harasser in the band, though.

Martin: I’m a criminal spooner. I’ve woken up in other beds before and been like, “Oh! Hi, Zach [Johnston], I’m sorry.”

Holmen: I think everyone in this band is in different stages of sexual repression. She’s [Martin] a little less repressed than the rest of us.

Monica, I’ve also read about how you were a really shy singer before you joined this band. How have these boys have helped you find your voice?

Martin: They’ve taught me how to be better with my anxiety around performing. I’m still at the point where every single day, my reasonable response is trumping my emotional response – which is, “This isn’t good.” This South By especially was good for me. I need to start faking it and owning it. Matt has been my number one encourager for many, many years, and the puppeteer for a lot of this band. Matt suggested me for this band when it was coming together.

Holmen: I think we found our voice as a band, and no one’s getting their way. No one is getting their way in this band, and that’s the best, because then no one can be like, “Well, this is my thing,” or whatever. I present a lot of ideas and I push for a lot of ideas, and when they’re good, they go through. But I get shut down all the time. But ideas are no single-origin, it’s not just one person. It’s an amalgamation of things and ideas.