Two Kansas City designers were finalists in PBR’s annual artist can contest this year. Ben Walters’ scorpion design was selected as one of 10 winners to appear on 140 million cans and bottles worldwide starting in October 2022.

PBR has hosted a contest for up-and-coming artists annually for the past 10 years. Walters says he has submitted 37 designs over the past three years and was anxious for the day PBR would finally announce the winner.

“I spent all morning refreshing the Pabst website and Instagram to see if anything had posted,” says Walters. “When they shared on it, I held my breath while the graphic flashed the winning designs. When I saw mine, I gasped and cheered all at once.”

PBR upped the prize money and number of winners 10-fold this year in honor of the anniversary of the Artist Can Contest. Ten winners each received $10k in addition to their designs gracing PBR products across the globe.

With $10k of prize money burning a hole in his wallet, Walters has eyes on an upgraded iPad for his digital work, along with suping up his 1980 Fiat—and of course setting aside a chunk for the taxman. 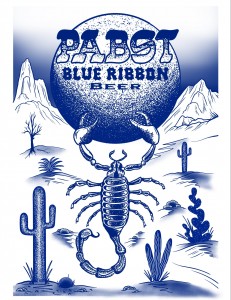 Walters says the design inspiration came from a flash tattoo he saw. He kept sketching scorpions afterward until he had one he liked. He added the rest of the scene and had his can design.

“I liked the gritty, stippled style and thought I’d run with that,” says Walters.

KC designer Frank Norton was also a finalist this year and in 2021. Walters is the first KC area artist to win the PBR Artist Can Contest and has upcoming projects in photography, ink work, and digital art.