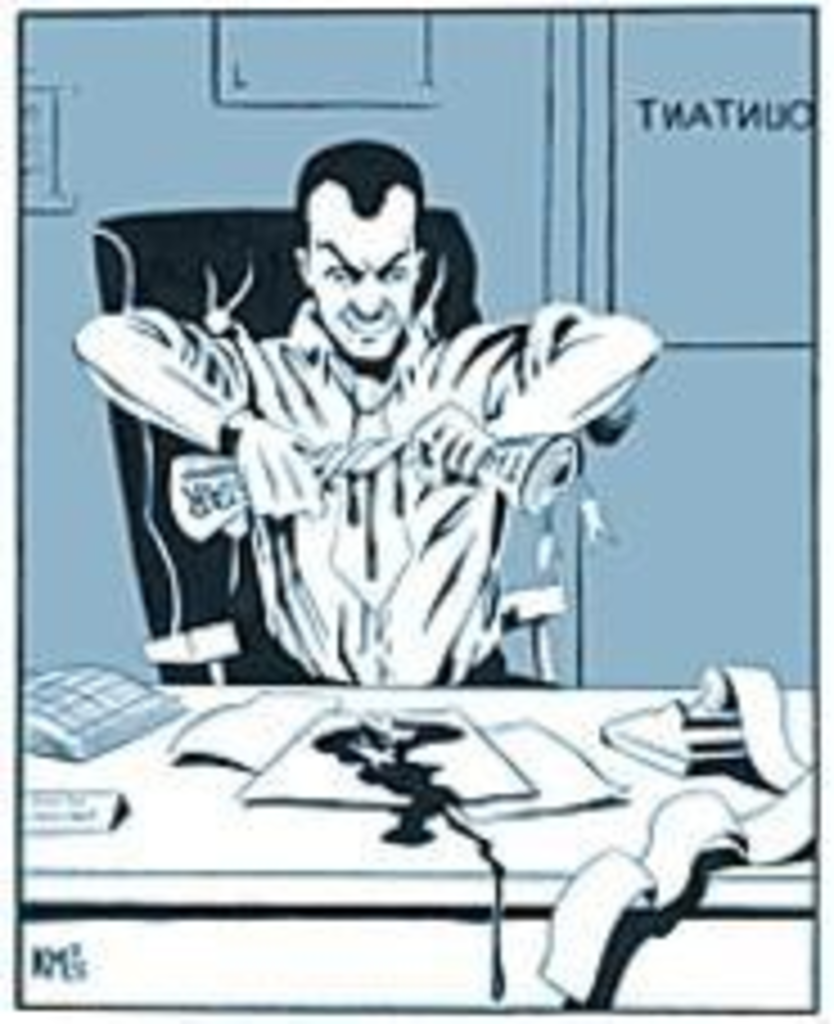 Every morning, drivers flood this town with 280,000 copies of The Kansas City Star. They dump bundles into blue street boxes and throw rolls wrapped in orange plastic onto front porches. People pay 50 cents for a copy on the sidewalk, a few dollars less for a yearlong subscription.

Then they grumble. They gripe about all the bad news, or the slant of the coverage, or the lack of substance. And those of us who keep feeling like we’re getting less and less from Kansas City’s paper of record now have proof.

Two recent internal e-mails — or “Z-mails,” as editor Mark Zieman likes to call them — reveal the desperate measures Star editors have been considering as Knight Ridder, the paper’s parent company, strangles the newsroom.

On March 5, Zieman sent out a letter telling his staff about “a new version of the Monday Star.” He explained that “we have been asked by Knight Ridder to dramatically reduce expenses for 2001. For the newsroom, that largely has meant a hiring freeze and significant cuts in newshole. The good news (such as it is) is that most of these cuts have already taken place, without vocal complaints from readers. The bad news is that more was demanded, and we are fresh out of surgical extractions that won’t be visible to our customers.”

You could sense Zieman’s struggling to rationalize the plan he and his crew had devised. They would target Monday editions because Monday papers have the fewest readers, because Monday papers are “our weakest news product” since not much news happens on Sunday, and because “it’s the day people return to work or school and are busy and want their information quickly” (as if the other weekday mornings are leisurely for people trying to get to their jobs on time). They would give Monday’s editions a “week ahead” theme, combining the A section with the Metro section to save four pages. “That means we would lose one of our opinion pages, most of the existing Monday business presence, about half a page in metro news and another half page or more in national and world news, among other trims.”

Zieman countered the bad news by claiming that editors had “added value to the Monday paper through new features, navigational tools and page designs.” He hoped the members of a focus group, scheduled to meet that night, would sign off on the changes.

They didn’t. While the selected readers were “fans of The Star” who embraced the new “week ahead” features, Zieman wrote in the next day’s Z-mail, they “quickly recognized the cuts in newshole.”

It’s not surprising that readers would notice a four-page drop in content — what is surprising is that anyone at The Star thought they could disguise it with “navigational tools and page designs.” At any rate, the focus group’s response killed the Monday redesign idea (though, Zieman tells the Pitch, the exercise wasn’t futile; he says readers “like the look-ahead features, and we may go ahead and incorporate those into the paper”).

On the issue of the budget squeeze, he informed his staff that “we will continue the difficult task of searching for ways to meet our budget obligations while keeping our readers as happy as possible.” He said he welcomed employees’ suggestions. But chances are Star workers are fresh out of ways to help — they’ve already given up a lot. The hiring freeze has meant fewer people do more work, and even the little things are starting to add up.

Case in point: Like other big companies in town, The Star for years has paid half of employees’ season tickets to cultural events at places such as the Missouri Repertory Theater, the Kansas City Ballet, the Symphony and the Lyric Opera. It was a small benefit, but one that spread lots of goodwill to employees and to arts organizations, which need all the help they can get. But over the past year, the paper dropped the season-ticket deal, informing employees that it would chip in only for single-performance tickets. Then it scrapped the benefit altogether.

“The Star decided to pull out of our ’employee share program’ this year,” says Barb Haviland, the Missouri Rep’s marketing director. “They did it just within the last few weeks.”

Kansas City Ballet box-office manager Brenda Crow says the paper “did about a thousand dollars a year with us total — most of it was for The Nutcracker.” That’s not a lot of money. But, as Crow says, “the bad thing about it is that when you have a fifty-fifty program like that, it encourages people who might not go to the ballet to try it.”

And it’s the kind of thing that makes Star employees grumble. They’re tired of being “nickle-and-dimed.”

“Every newspaper is looking to save on expenses because the cost of newsprint has increased so much this past year,” Zieman says. “Every paper is handling it in different ways. Some are cutting sections, some are cutting circulation, some are trimming features, and we’re looking at all of our options.” When pressed, he says it’s not just the cost of newsprint that’s driving such changes. “Advertising seems to be slipping; some people call it a recession, a lull, I don’t know. But that’s not specific to newspapers. You can read The Star and see where all kinds of companies are laying off people, the stock market’s dropping, people are spending less, consumer confidence is going down. That clearly affects us in revenue.”

We’d have more sympathy for the paper if it weren’t for one thing: Knight Ridder just finished another great year. With 32 daily papers, it’s the country’s second-largest newspaper publisher, and in January, CEO and chairman Tony Ridder told financial reporters that “for the fifth year in a row, we are reporting record earnings per share. We are also reporting record operating income, record cash flow and record net free cash.”

The Star’s total advertising revenues were up 6.5 percent, making it one of the chain’s strongest papers. “Our best large-market retail performance was Kansas City, [with retail ad revenues] up 5.9 percent,” Ridder said. The chain’s glowing performance “was accomplished amid the challenges of rising newsprint prices and a softening revenue growth environment — which underscores, once again, the commitment of our management to tight cost discipline.”

In other words, Knight Ridder’s profit margins have come at the expense of shortchanged Kansas City newspaper readers. And Nutcracker fans.