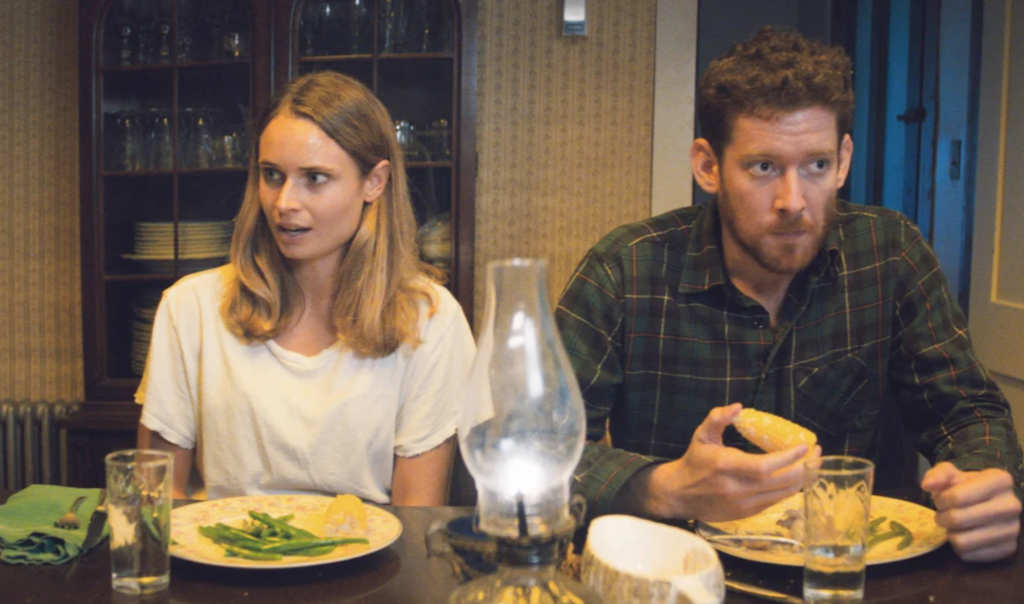 So the question is: “How many Texas Chainsaw Massacres do we need?” Whether or not white dummies getting caught up in backwoods shit is of artist value, my personal answer to this “Yes, an infinite number of them please.” I love any story about the darkness of America that exists in plain sight, and how our bloodlines are tainted in personal histories of actual bloodshed. So I was an easy sell for Honeydew: a film about outsiders, families, pain, trauma, and the absolute stupidest goddamned cameo that has ever been committed to film.

Directed by Devereux Milburn, Honeydew follows Sam (Sawyer Spielberg) and Riley (Malin Barr); a young couple who find themselves derailed on a backroads journey. After losing their camping location, they wind up taken in by an elderly couple and a disabled family member(?) in a house where terrible things are almost certainly afoot.

Yes, the lead actor is Steven Spielberg’s son. So there’s that. He’s tremendous in his role, and actually has big Domhnall Gleeson energy. Good for him.

Taking cues from 70s grindcore cinema, the film seems to have only… taken cues. And not full ideas. The best chunks of Honeydew are extended periods of odd dread. At points throughout, I would have almost used the Twilight Zone segment about the kid who watches TV and controls the world around him as the jumping-off point. The best stylized choices stem from leaning in hard on off-timing action and bizarre sound cues. If there’s anything Honeydew does well, it constantly keeps you off your feet.

Unfortunately, the third act gives way to the emptiness that lives beneath the surface. Which is a shame, because there isn’t a lack of skill or talent involved here—there’s just nothing of value to validate the journey. And the film seems almost aware of it? It opens with some ideas. And by the end, anything of interest has fallen by the wayside.

Except for the reveal. Which is not an idea. It’s a thing that happens. And it will be the only thing that people have to say about this movie.

This Southern-friend I Have No Mouth And I Must Scream builds towards a reveal of a character that is played by a big name actress who, you could not guess would be in a film like this, not if you were given years to do so. Truly, the most ridiculous cameo in a film I have ever seen. One so ridiculous, that the rest of the movie ceases to exist. The first few minutes of her screentime were me saying “Haha that kind of looks like…” and then the terrible realization set in. I will not spoil it for you here. If you are the sort of pop-culture fan/horror aficionado who loves to do Some Shit to themselves, you should deserve to enjoy this absolute rollercoaster for yourself.

So that’s Honeydew. Some people go to the woods. Some people fuck around and find out. Some gross happens. Your mileage may vary.

Sometimes life itself can be the most terrifying thing of all.