"Are you humans or are you demons?" 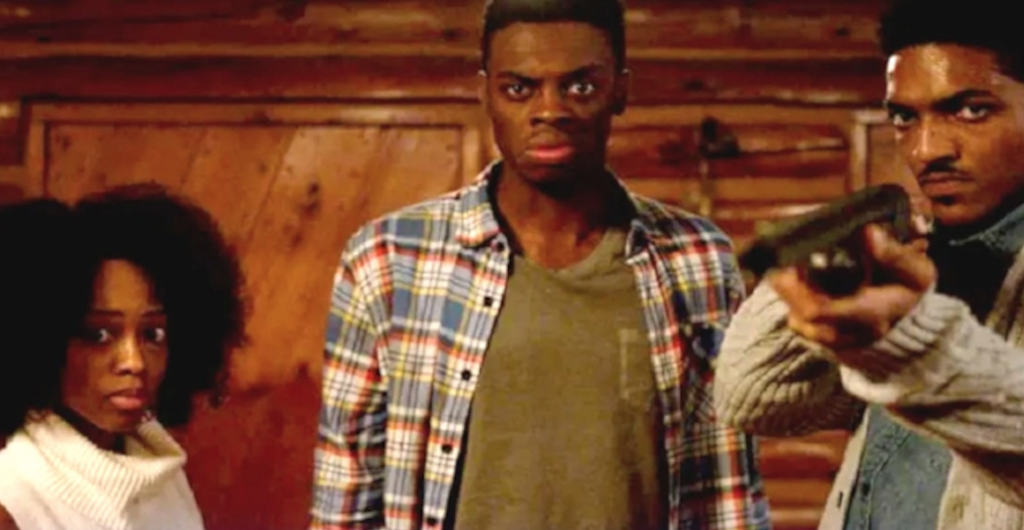 For Panic Fest 2021, there’s a film that might take the cake when it comes to biting off more than it should be able to chew. That’s Blood Conscious: a film that wants to date on modern race relations, American paranoia, mass shootings, and demonic possession all in one 90 minute chunk.

More than once I whispered to myself “Ohhhhhh, they’d better stick the landing here or it is gonna go real baddddd.” Not once did it fail to stick the landing. So no matter what other criticisms may live here, this film thematically shoots the moon and lands on the dark side with ease.

A vacationing family turns the tables on a mass shooter who claims to be fighting demonic forces. Kevin, his older sister, Brittney, and her fiancé, Tony, set off to their parents’ lakeside cottage expecting a leisurely weekend getaway but little did they expect the horror that awaits them. They enter a scene of mass murder, where their parents and neighbors all lie dead. Terror strikes when the armed murderer confronts them, alleging to have been fighting demonic forces that had possessed them all. As unexpected and traumatic events keep unfolding they will have to find a way to survive the night without turning on each other, or becoming possessed.

Starring Oghenero Gbaje, DeShawn White, Lenny Thomas, this film plays out like dealing with the aftermath of a slasher film. What does Camp Crystal Lake look like to someone who shows up the morning after the yearly rampage? And what horrors await them, especially if they’re met by the killer? And what if the killer of your parents starts to sound… like he’s on your side, and less insane than you’d imagined… the killer of your parents to be?

The main characters and their family are all Black; occupying a vacation home in a Michigan-ish clearly white community. And the mass executioner is also white. The stage is set early on to understand clearly that this is a racially motivated crime, by a man clearly unwell due to conspiracies from outside forces. It rings especially pertinent in 2021. But from the start, this murderer seems more invested in helping the kids survive, despite knowing what happened the night before.

“Are you humans or are you demons?” he screams while holding a gun on them. “We’re on vacation,” they reply.

What follows is a film about American delusions. About how quickly an idea with no logic behind it can take hold, and the terrible ends to which that can lead. There’s DNA from Carpenter’s The Thing behind the dynamic of distrust and in-fighting in a cut-off location, squaring off against something that desperately wants to escape.

Blood Conscious imagines what would happen if Evil Dead’s Bruce Campbell was a mass shooter, and people showed up the next day asking him to prove that the bodies were those of Deadites. It creates thin ice that permeates the ground beneath the entire runtime. That this ice never breaks and only continues to become more interesting—feels like watching someone juggle chainsaws.

A truly tension-filled dark comedy that does so much with so little it’s impossible to not appreciate exactly what it has accomplished.