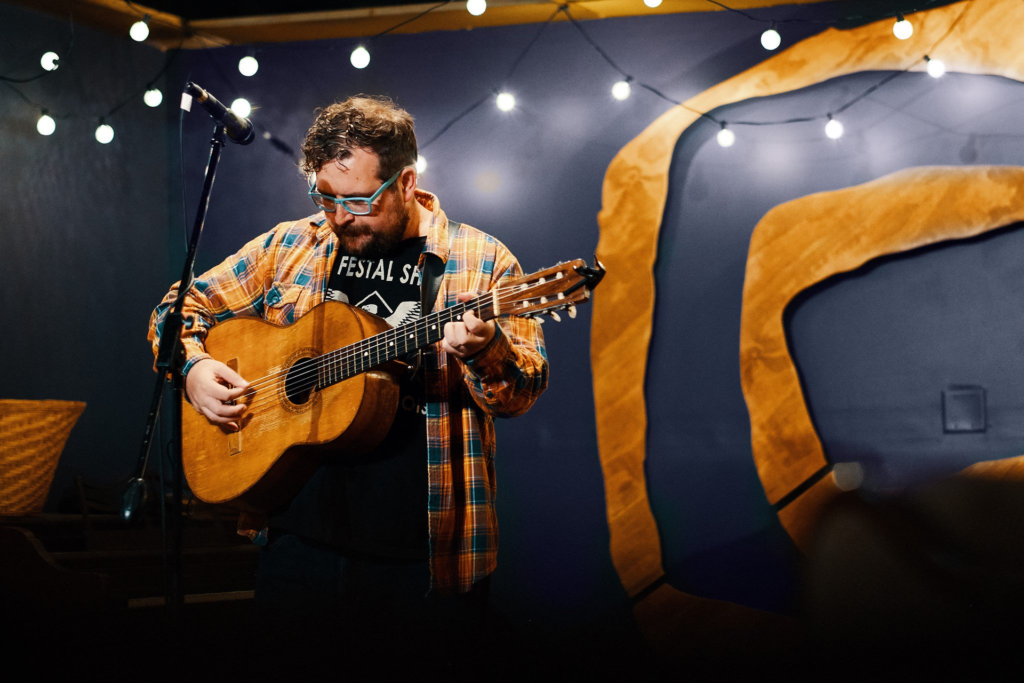 Singer-songwriter Nate Allen has worn several hats over the course of his musical career. Best known for the duo Destroy Nate Allen with his wife Tessa, he’s also fronted the folk rock ‘n’ roll combo Nate Allen & the Pac-Away Dots. At the heart of it all, though, is a songwriter who, despite making music that inspires thoughtful creativity, is…working through some things. And that aspect of Allen’s musicality has never been more apparent than on his latest project.

Under the aegis of Good Saint Nathanael, Allen is soon to release Hide No Truth, an album he describes as exploring “human vulnerability and his own broken Christian religious experience.” The album’s first song is entitled “Everything That’s Lost,” and begins with a line that includes the phrase so much damage to unravel; by the time “Coming Unglued” hits three tracks later (So blessed Lord Jesus, what should I do?/ They say they love you and I love you too!), you’re well into some deep and dark territory. There’s a slight uptick into hope as the album progresses, bolstered by electronic flutters courtesy of Jessie Bear on “Making Repairs,” but Allen’s music is unflinchingly direct in its confrontation of a world that seems so very unkind.

In other words, there’s a lot to unpack on this album. I recently sat down with Allen at the Alamo Drafthouse Mainstreet’s Chesterfield bar on a cold night in KC to discuss how Hide No Truth came to be.

The Pitch: The first song for Hide No Truth was written in 2013, but you’ve put out several things during that time, right?

Nate Allen: I have. They were all made before that, and they were just waiting for the right time. When we moved here, I had several albums, so to speak, in the can. They just kinda got misplaced in time, because of the move. I moved here from Portland, Oregon.

I was a workaholic, and a really bad one, so those would have come out well, well in advance. I would’ve been like, “Dude, we’re getting’ them out. I don’t care, feelings and logistics be damned, I’m just going to go with my primal instinct, which is to release music and to make it, and to just push everything out of the way.” That’s not such a good thing — from a relational standpoint, from a business standpoint — so it’s kind of been a reshuffling of how to release stuff when it makes sense. This record was technically recorded at this time last year, and it’s just been getting all the pieces in line to get it out.

Was part of the reason you waited all of the people who guested on the album getting their parts recorded and sent to you?

It was recording their parts. It was the mixing. Jon [Terrey], who recorded it, tours a lot, so we had to wait for him, and at one point, we were like, “Let’s give it another month, because it doesn’t really matter, because you have a tour and I have tax season [Allen’s wife, Tessa, is a tax preparer].” Like, let’s not be idiots, and pick it up in a couple of weeks.

I did all of the art myself, which took a good chunk of time, and shopped it to publicists and labels, and those all take months, and when it was all done, I was like, “Well, this is what we’re doing.”

The way the album progresses is what grabbed me most. It feels like it starts as a clenched fist that slowly releases as it goes. Those first couple of lines really set the tone, right from the start.

I would agree with you. The whole album has been like going from a clenched fist mentality to opening up. You were asking about timelines: along the way, there was a year I paused for therapy, writing the record. In the process of this album cycle, so to speak, we moved, had a baby, bought a house, stopped for a year on therapy, and it adds up pretty quick. That explains why the pace was what it was. When I started writing the record, I had no idea how much opening up I had to do, so it’s been a big learning process for me.

Did the process of participating in therapy allow you to feel free to write about the things on the record, or were these always topics you were going to address?

Baseline, five years ago, I never would’ve written this record. I just wouldn’t have done it. I would’ve tip-toed around the edges, and would’ve been very closed-fist around topics of faith, topics of abuse, topics of family stuff. Those were all areas that weren’t off-limits artistically, but not at the forefront of my creative process.

The part that therapy played in the process is that, since this is so close to my childhood trauma, I couldn’t play the songs. I could write them, and play them at home, but if I took them out in public, I’d have a panic attack. I played them at church, I played them at clubs, and I’d start to play, then I’d literally be done with the set and have to disappear and nobody would see me, because of the intensity of the process and how close it came to various issues.

The way in which Hide No Truth addresses faith is unique, because it seems that most artists would go to either a warm, exultant tone or to a complete rejection of faith. However, the album is so reflective of your personal journey, it allows you to explore a desire for faith and the acknowledgment of its difficulties simultaneously.

It’s a process record. We went for that middle ground of displacement, if that makes sense? This has been so long, I can’t even, like — there are so many journals. Things that I think are lessons and scars, kind of where I’ve shifted perspective along the way. I know that, if I play these songs enough, along the way, they’ll shift and become different songs, but I wasn’t there emotionally enough to even play them.

Therapy helped me to be able to get there and be able to play the songs. That was the whole goal. Not that I’m done — I actually just booked another session with my therapist — but I just needed to be able to get to the point where I could just play them, because that’s part of being a musician.

The release show for Hide No Truth is at the Squeeze Box Theatre this Friday, January 25. Details on that show here. You can pre-order the album from High Endurance Records’ webstore.