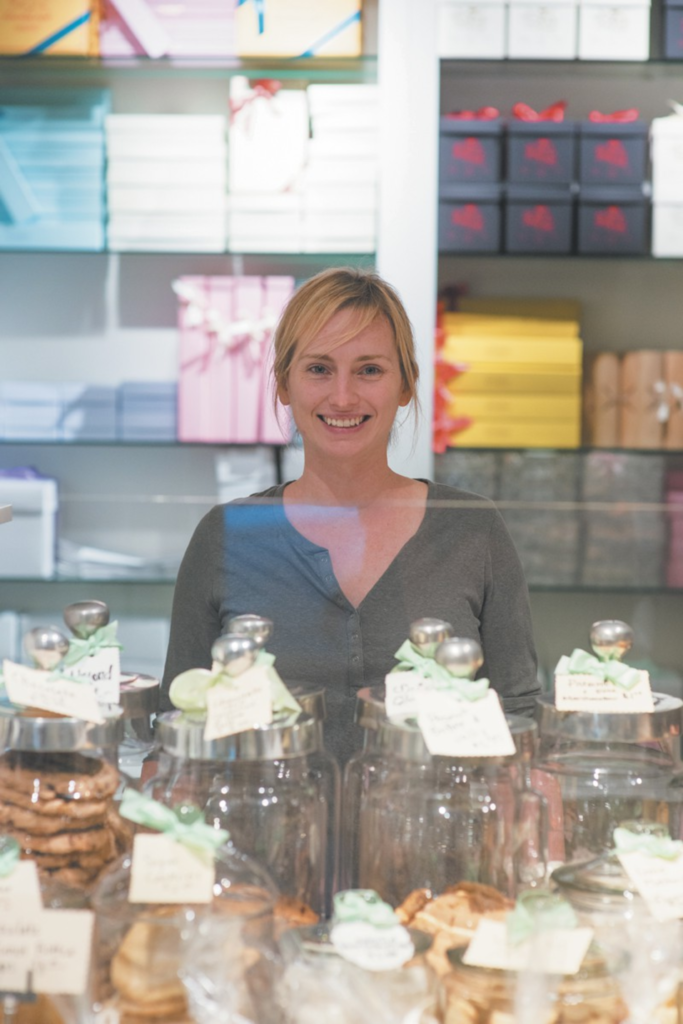 When Natasha Goellner, pastry chef and namesake of Plaza sweet shop Natasha’s Mulberry & Mott, has late-night cravings — she’s three months pregnant with her first child — she typically doesn’t have a sweet tooth. (OK, there was a night when Goellner “went to town” on a pumpkin cheesecake that she had made earlier in the day at her commissary kitchen in Waldo.)

“My cravings change from day to day,” Goellner says, “but so far I’ve been craving fried chicken, watermelon and Mexican food.”

Goellner stands for much of the day, creating the colorful macarons, pumpkin cream puffs, cookies and éclairs that she has built her reputation on. But as her pregnancy progresses, that’s going to be harder to do. So she is considering some additional staff, in both sales and production, for the upcoming holiday season. And she has room for the new help.

Goellner opened her first bake shop in Leawood’s Mission Farms development nine years ago. She later moved it to a smaller but more visible location on the Country Club Plaza, at 4745 Central. But when her roommate at that address — the Halls department store — vacated, Plaza owner Highwoods Properties moved Mulberry to 320 Ward Parkway, where the antique shop and design studio Superlatives once was. The former Halls space is set for renovation, ahead of new tenants — one of which, Goellner says, will be her shop.

Goellner says she likes the new space, which is as theatrical as a stage set, with stylish, illuminated pastry cases — Goellner’s father, George Goellner, bought them from Halls during the final interior-fixtures sale — and dainty public rooms decorated with clear Lucite chairs. But it’s a big space behind the sales counter. Too big.

“It’s 7,000 square feet, most of which you can’t see,” Goellner says. “When we eventually leave this space to return to 4745 Central, it will be to smaller quarters.”

“I’ll have two seatings every Saturday and Sunday through the holiday season,” Goellnersays. (She’s already taking reservations at 816-960-7096.)

Goellner says the Superlatives space required very little interior work other than painting and the installation of the pastry cases. It still looks like a gift shop — tables are stacked with attractive gift packaging and boxes of marshmallows, candies and sweets.

Goellner is relaxed about impending motherhood and her busiest retail season. “I’ve got a great crew already,” she says.
For Thanksgiving, Goellner will add three pies — pumpkin, pecan and sweet potato — to the display cases as well as several flavors of house-made ice cream, including cinnamon and pumpkin, and cranberry sorbet.

By the holidays, the new chocolate line, Lanmou, that Goellner has created with business partner Megan Piel, will be available in the store. The cases already contain Lanmou chocolate bars, but the truffles and bonbons are a few weeks away. “We’re waiting on our packaging, which is a special ivory paper that looks like alligator skin,” Goellner says.

She’s also waiting on the reserved 15-minuteparking spaces slated to be created in front of her shop, making it easier for patrons to dash in, pick up their desserts and leave.

“Parking hasn’t been much of an issue so far,” she says. “When people find out where we are now, they seem to find a place to park pretty easily.”

When you’re craving something rich, decadent and sweet, the universe can be very helpful.