Muncheeez Deli was too beautiful for this world 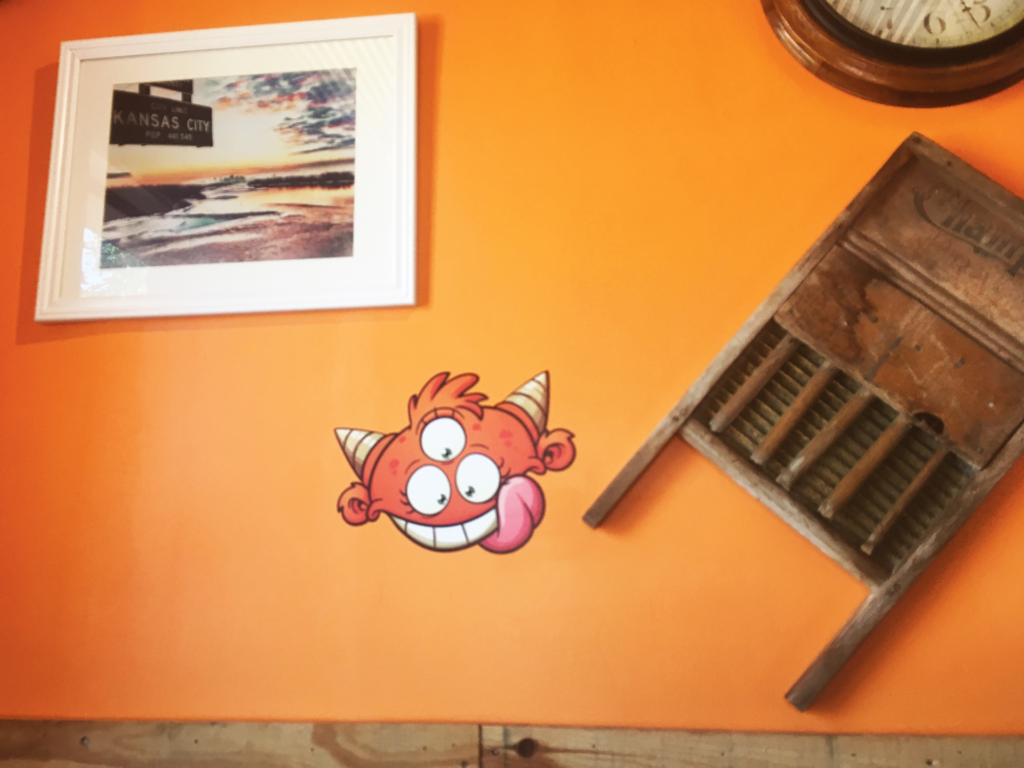 (Note: Two weeks after I filed this story for print — it’s in the June issue of The Pitch, out now —  Muncheeez Deli vacated its former location and burrowed inside the nearby MO Brew like a parasite. Much of the menu survived the trip, but Muncheee and his minions — see below — stayed behind. You can see them only through the windows of the now-empty deli, where they lurk in the silence and shadows, waiting to be awoken. Some things are too pure for this world. The world is too pure for some things.)

How far into the black seas of infinity will one woman voyage for a decent Giardiniera? What infernal bargains will she make for a pretty good hot dog?

The answers — whether I wanted them or not — awaited me at Muncheeez Deli, a small sandwich shop in the West 39th Street District district that appeared as if by magic one day in the former home of the Just Juice Baby.

Muncheeez is a decent Scrabble hand with a motto that isn’t, but might plausibly be, “Leeegally Distinct from the Competition.” All its cheese is called “cheeez,” all its customers are called “monsters,” and the dining room drips with branded cartoon demons that look as though they were cribbed from a drug-fueled children’s television show. The deli has a detailed creation myth for its tentpole star, Muncheee, and his infernal servants: “Munch, Chomp, Gnaw, Nibble, Crunch, and Bubba.”

Here are some facts about Muncheeez Deli: The sandwiches are fine. The meats are sliced fresh and piled impractically high. The bread is an afterthought, a skin stretched across a distended belly of carnal pleasure.

On my first visit, I had a hard time selecting a meal. Everything on the chalkboard menu was described in cheerily apocalyptic tones. Here was the “Corned Beef Destruction.” There, the “Mr. Muncheee,” a sandwich heaped with every meat and cheese available. “Feeds two monsters,” the description warned. I did not order it, fearing what I might become.

Though I did not see Mr. Muncheee on my visit, I felt his presence like a cudgel. All of the deli’s promotional material features the same red-skinned, sapphire-eyed devilbear with mammalian ears, reptilian spikes, and the disdainful, front-facing eyes of an apex predator. In the logo, the monster brandishes a single curled, gleaming claw, gesturing lewdly toward something just beneath the frame.

“What is he pointing at?” I asked my dining companion. His suggestions did not comfort me.

The Muncheeez brand belongs to Krown Concepts, a local group that owns the nearby Drunken Worm and MO Brew, among others. And while the deli began as a small, solo outpost, it arrived with all the trappings of a grim corporate franchise. The employees had dehumanizingly chirpy job titles — the person making my sandwich was a “Hunger Reduction Specialist.” And the decor reminded me a little of an Applebee’s, if Applebee’s were in the business of summoning Great Old Ones instead of microwaving mechanically separated meat parts.

There was a rusty saw on the wall. There was a photo of an old man lighting a pipe with a match and looking sort of angry about the whole thing. There were nine clocks, none of which displayed the correct time. For what base purpose did they tick? 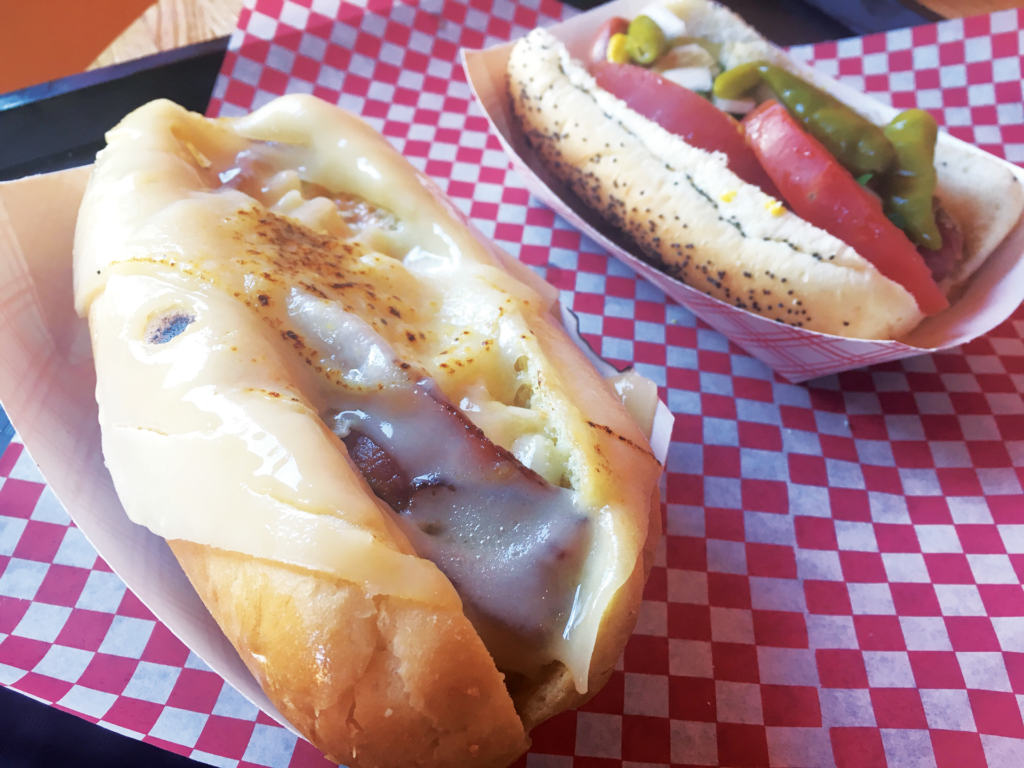 My stomach growled — in hunger or fear, I couldn’t say. I ordered a cup of “nacho soup” and scanned a submenu titled “DAWGS-N-DAWGS-N-DAWGS.” The Super DAWG had Ruffles, “special sauce,” pineapple puree, bacon and cheese. I wasn’t sure if I would like all those things together, but I ordered it anyway. I knew I would at least like the Ruffles.

I took a seat in the front of the restaurant, surrounded by walls the violent color of fresh-spilled blood. Over by the napkins, someone had hung canvases with mocking inspirational quotes. “LIFE IS A BLANK PAGE THE POSSIBILITIES ARE ENDLESS” read one. Another: “LIMITATIONS ARE ONLY CREATED BY OUR MINDS.”

Somewhere in the distance, Werner Herzog awoke with a start, then stilled.

I removed the lid of the paper soup cup while I waited for the DAWG. A film of oil floated on the surface. Pointed tortilla chips jutted up like Lovecraft’s mountains of madness. The soup was delicious.

At some point, I glanced over at the wall and noticed an enormous decal of a three-eyed monster with two satanic horns the size and shape of ice cream cones. He was staring at me hungrily. A fat tongue lolled from his mouth. I looked at him, trying to decide which of the monsters this was — Bubba, maybe. His eyelashes were on the sides of his eyes. I did not look again.

I rested my eyes on the photo of the smoking man instead. His face looked eerily familiar. “Who’s this in the photo?” I asked the Hunger Reduction Specialist.

There was nothing else to say, and so we passed the remainder of our time together in silence. I stared at the ceiling. A dried puffer fish spun slowly on a string, a nightmarish carousel powered by the stale breeze of a ceiling fan.

A butane torch punctured the silence with a savage hiss, and moments later, the DAWG arrived. It was swaddled in a pliant bun and smothered with brown-speckled cheese. It lay perfectly still on a square of red-and-white checkered paper.

I took a bite. It tasted like something with cheese and pineapple on it. The bacon was nice. There were no Ruffles.

Time began to slip away from me. I looked up from my DAWG and my companion had gone — for how long, I couldn’t say. Each clock told a different story. Minutes or hours later, a dark-haired man wandered in from the 87-degree heat carrying an enormous tub of mayonnaise-based pasta salad, which he handed wordlessly to the Specialist behind the counter like a ceremonial urn. On a TV in the corner, a weathercaster waved his arms frantically in front of an angry radar map, warning me to take cover.

Days later, I awoke in the middle of the night in a cold sweat, certain I’d hallucinated the whole thing. I opened my laptop and searched for some trace of the deli — but no, sweet relief, there was a website. The deli had been open for months, but its homepage blared an ominous banner: COMING SOON.

I do not know what is coming, or whether I have the strength to weather it. I know only that I wish to return. I find my feet bearing me there even now, driven by some sick and nervous energy, a compulsion deeper than hunger. The deli is empty, the door locked — but it swings open to welcome me. I step into the creature’s scarlet maw, no longer sure whether I am awake or dreaming.

I do not look for Mr. Muncheee. I do not think of Bubba and his sideways eyes, lids closing like eldritch window curtains.

I do not dwell on The Nine Clocks and what will happen the day they synchronize.

I do not ask for whom the dinner bell tolls — it tolls for meee.