Moving from punishment to rehabilitation trickles down to save our community 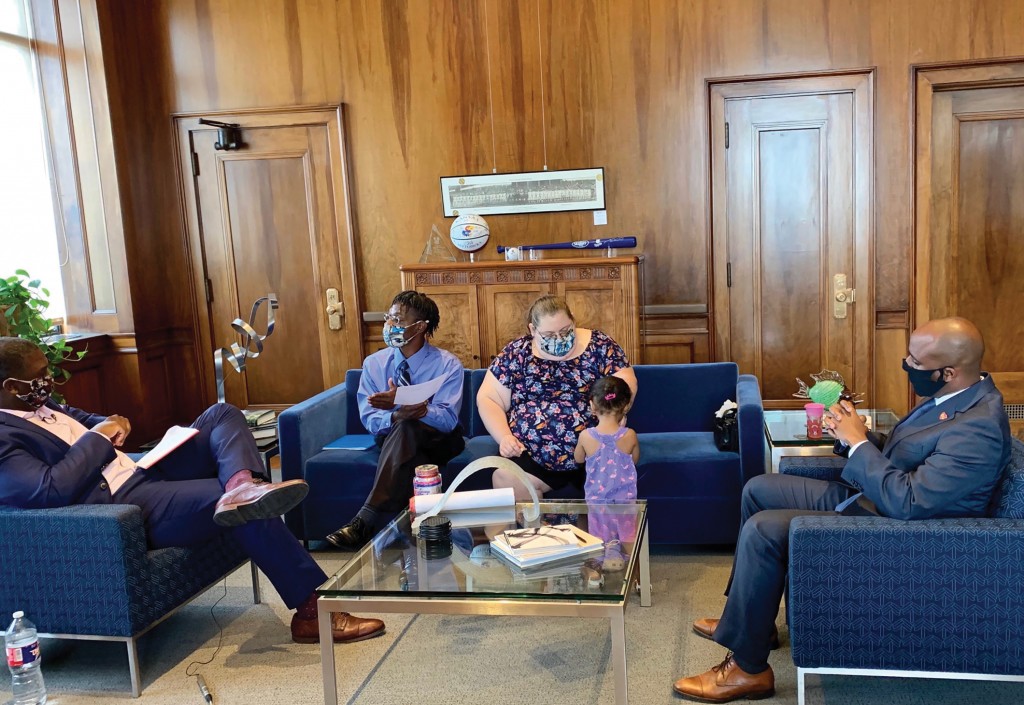 [Editor’s Note: As we asked what the city looks like moving forward, and how we fix some of the largest problems facing our community, we thought it prudent to ask the person most directly tasked with overcoming those pitfalls: Mayor Quinton Lucas. The Pitch and our columnists have our own opinions on what should be done, but none of us sit in a position to discuss what could actually come to be in the years to come. In watching a city plagued by gun violence that will almost certainly set a new homicide record this year, as federal agents are being redirected to the city, we wanted to hear what the most informed individual in the situation had to say about what we’re up against and where he intends to lead us.]

It took him awhile to get it right—not because he couldn’t pronounce the word, but because he couldn’t read it. When he finally got it, we were both proud. Affidavit. It’s entirely possible that this man’s inability to read played a significant role in a long series of misguided decisions that ultimately landed him in Auburn Correctional Facility, a maximum-security prison in New York.

I met this student in my final months of law school in upstate New York; I taught him and his classmates a Constitutional Law course for two hours each week for a semester, and I learned more from them than perhaps any other group of people I’ve been surrounded by in my life.

In recent years, our country has rightfully engaged in serious discussions surrounding criminal justice reform and has slowly begun to ratchet back some of the damage caused by the war on drugs that existed throughout much of my childhood. As we work to implement reform—at all levels of government—we must take seriously these two responsibilities:

1. Helping provide low-level offenders an opportunity to get back on their feet, rather than throwing them in jail; and

2. Reimagining what happens inside of jails and prisons for offenders who are already there.

My philosophy on prison is simply this: You should go there if you murder someone, if you shoot at someone, if you stab someone. You should not go to jail if you failed to pay a parking ticket, were busted with a small amount of marijuana, or couldn’t afford an alternative option like diversion. A lot of people who get caught up in the system spend the rest of their lives trying to climb out—with little luck. We need to move beyond sending people to prison because our legal systems allow small infractions or unpaid fines to compound upon each other to the point of incarceration.

We’ll continue to rectify today the policies that allow prison to turn into the end of a person’s life, so that in the future, it may serve instead as a turning point. 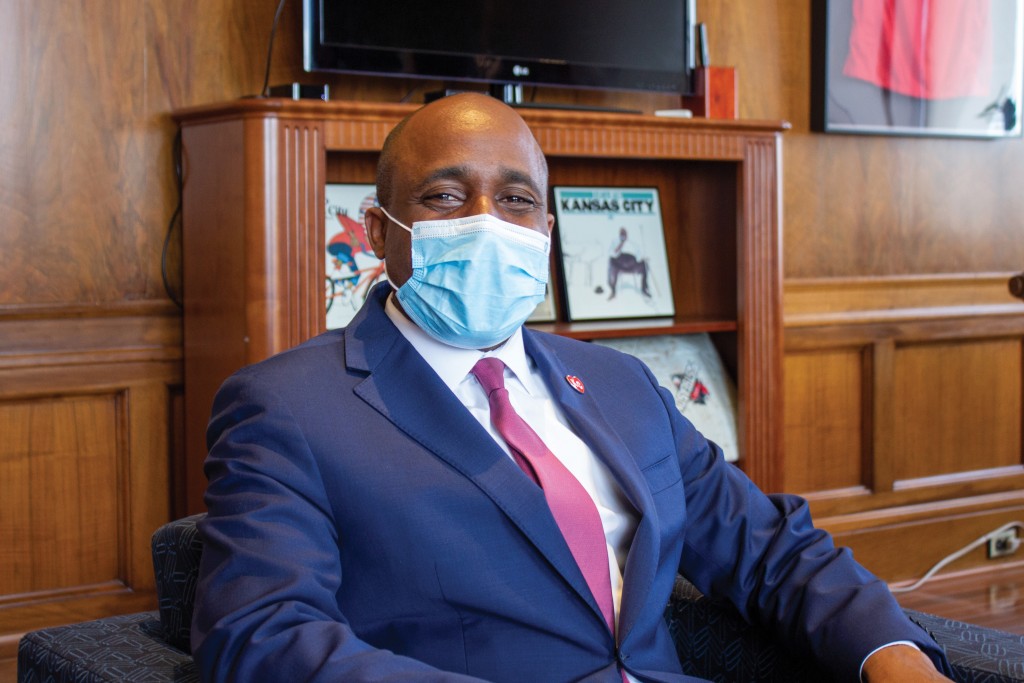 Mayor Quinton Lucas in his office at City Hall. // Photo by Fengxue Zhang

In what I hope becomes nationally transformative, I’ve introduced an ordinance to establish a Kansas City Administrative Tribunal that would oversee parking tickets and other non-violent city ordinance violations similarly to how the Kansas City Municipal Court does—with this important distinction: incarceration would never be imposed in any part of the process payment or collections process. Instead, fines would be civil in nature, with unpaid fines and interest going to one’s tax bill.

Earlier this summer, the City Council overwhelmingly passed my proposal to remove marijuana violations from the Kansas City Code of Ordinances altogether, because the City should not be in the marijuana policing business. I’ve also created a Marijuana Pardon Program and have issued my first pardon.

And the Council also recently passed my ordinance compelling the Municipal Court to provide, at minimum, 20 percent of non-violent indigent defendants the opportunity for diversion—helping ensure poor people aren’t burdened by the legal system. Usually, people who can afford a lawyer can have them negotiate diversion, help them get good deals, and avoid some of the aggravating penalties that come from even small municipal ordinance violations such as a parking ticket, but there are thousands of Kansas Citians who don’t have that opportunity. Now, more people who can’t necessarily afford a lawyer must still be provided diversion opportunities in lieu of other, oftentimes more punitive or expensive, penalties.

In a future Kansas City, the past doesn’t unreasonably follow people into their future. No one will be in our County jail because they were arrested after having a warrant out for their arrest because they couldn’t get off work to show up for their court date because they couldn’t afford to pay a parking ticket 18 months back. Instead, they’ll receive an opportunity to set up a payment plan, or maybe serve an afternoon of community service, if they can’t pay the ticket.

We will continue working toward a streamlined set of legal parameters that do not discriminate based on race or economic status. Nobody is above the law, but more equitable laws can be in our benefit—to not only decriminalize poverty, but also allow law enforcement to focus more on more violent, serious crimes. 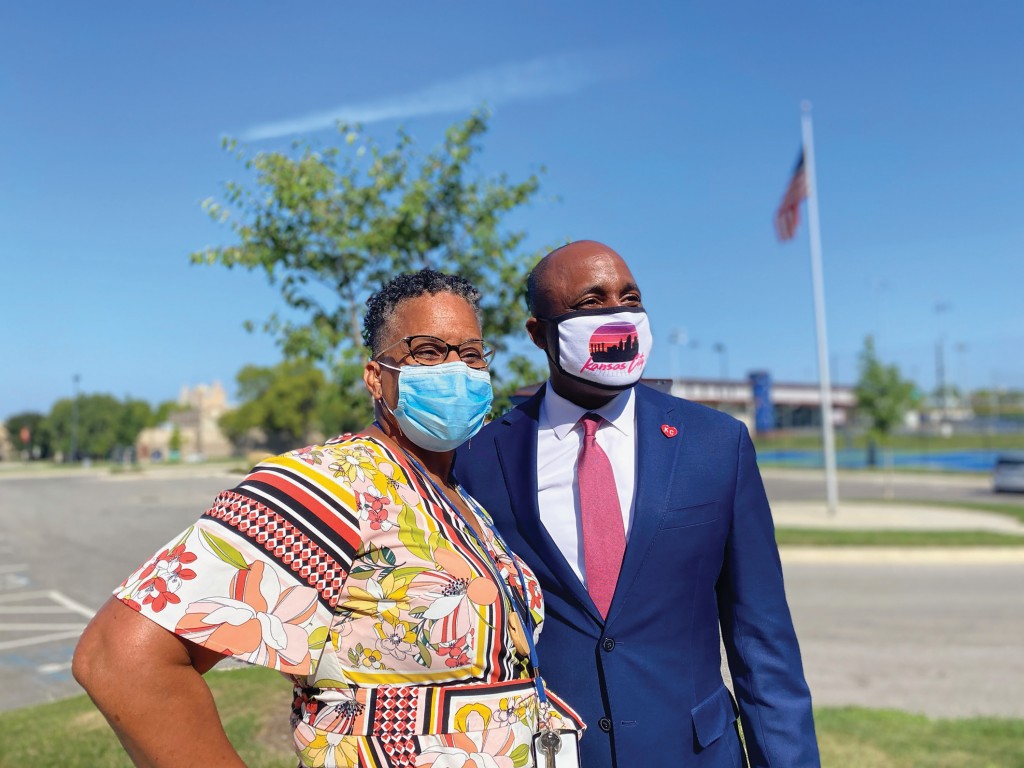 Mayor Lucas and his mother, Quincy Bennett, standing outside of the Black Archives of Mid-America Kansas City. // Photo by Fengxue Zhang

There are violent criminals and we need them off our streets. That’s not the question before us today. Instead, we ought to ask our policymakers—myself included, especially as Jackson County moves toward building a new jail—how do we ensure jails and prisons are catalysts for correction, instead of places of only punishment?

Over the past several months as we’ve confronted COVID-19, many in our community have come to realize—perhaps for the first time—the psychological effect of isolation, and how that loneliness can quickly spiral into depression or anxiety.

But at least we, on the outside, have a release. We can talk to our friends or partners, go on walks, listen to our favorite songs, eat our favorite foods. We must approach our incarcerated brothers, sisters, and siblings with the understanding that it must be difficult to feel motivated to make better decisions in the current prison setting.

A future Kansas City, following the lead of cities like San Francisco, will not charge exploitative rates for inmates to speak on the phone. The average cost in Missouri for a 15-minute, in-state call from jail is $20.12, and since many individuals are being held pre-trial, these ridiculous phone rates can be disastrous for those who cannot afford to make calls to post bail, build their defense, or make childcare arrangements while awaiting trial. If the goal of incarceration is truly to correct and rehabilitate, then those incarcerated should be able to contact their families and receive legal counsel, without companies and governments driving up the price to cut a profit.

I think back to my “affidavit” student, and how he likely lacked the resources necessary to get him caught up in school or to address any sort of reading disability. According to a Bureau of Justice Statistics Special Report, nearly 68 percent of inmates in state prisons did not receive a high school diploma and 66 percent reported having a learning disability.

A future Kansas City will ensure all inmates are provided the opportunity to earn a GED or continue their education while in prison—with programs that provide employment opportunities for them after they get out. Included in that should be extra support for those with learning disabilities, mental health resources, and individualized guidance to plan for life after incarceration.

For both victims and perpetrators, incarceration is often an inadequate tool for curbing violent crime. Many believe that a person who is released from incarceration often becomes a worse, not better member of society. This can lead to retribution, or a continuation down a life of crime—the only unobstructed path they can take.

Our corrections system must return to its original namesake—correcting.

I still teach law classes, now at the University of Kansas. At the end of each semester, I tell my students: good luck to you, I have confidence in your future careers, and if I can ever be helpful, don’t hesitate to reach out. At the end of each semester I taught in prisons, both in New York and in Kansas, I could only sign off with a simple: I wish you well. Even though they were also students just the same—capable of learning, problem solving, and hope—the current system of “corrections” we provide leaves me at a loss. When I leave these students, what systems of support—if any—are in place to carry the futures of these men, who will undoubtedly have many more difficult years ahead of them?

I sincerely hope for a future in which some of those students may walk free; may get to know how it feels to be enamored by a book, be a grandfather; or may even get to use some of the lessons they learned in my class to help someone else.