Mission: Board Games opens its community chest on Johnson Drive 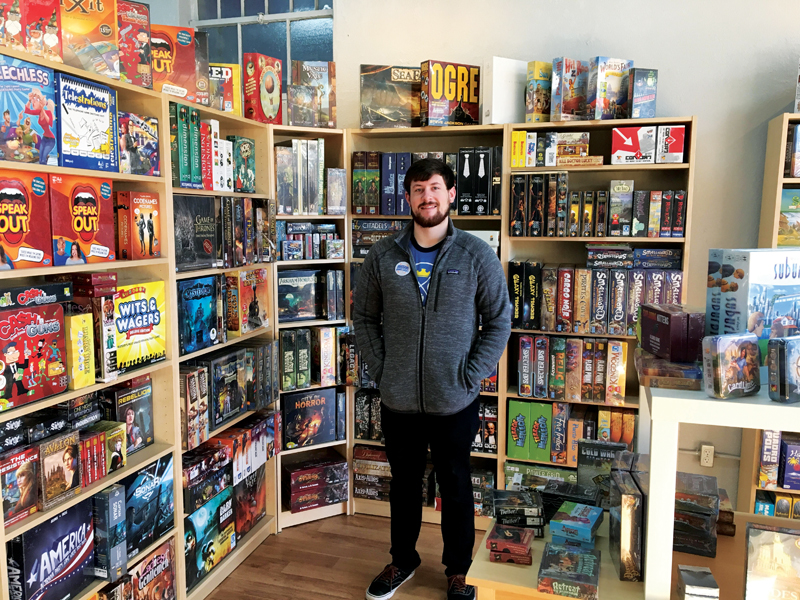 “Someone told me the best way to make a million dollars with a board-game store is not to open a board-game store,” Mason Hans tells me one afternoon, inside his board-game store. “But gaming — and community — is my passion. It gets people off their phones or computers for a while, and there’s a game for everyone.”

Hans, who is 22, opened Mission: Board Games at the tail end of 2016, gathering more than 500 all-ages games for sale in a Johnson Drive storefront in Mission. It was a dream project, and, that naysaying advice notwithstanding, it managed to draw a holiday rush. On this day, in fact, he’s still recovering from a hectic season.

“I’m sorry, I’m a little low on sleep these days,” he says, sipping a tall coffee. “A lot has happened.”

But as soon as I ask him about board games, he perks right up, as though all of the caffeine in his cup has slammed into his bloodstream at the same instant.

Into mysteries? Try Mysterium, he says, then makes his pitch: It’s a cooperative whodunit that challenges players to solve a 30-year-old murder. Can’t stop giggling at dick and fart jokes? You’ll love the NSFW edition of Exploding Kittens, the strategic card game co-created by Oatmeal cartoonist Matthew Inman. Want to keep humanity safe from deadly diseases? Pandemic Legacy might be the game for you. Wait — there’s a game called Pandemic Legacy?

I ask Hans to describe the game, the box for which shows several people wearing hazmat suits. He demurs. “I don’t want to give away any spoilers,” he says. I push a little, and he tells me a little, then swears me to keep this part of our conversation off the record. (Fans of pop-culture horror seem sure to love it.)

“Well, are you going to play it?” Hans asks me. I admit I’m thinking it over.

Of course, the old-school titles are well accounted for: Scrabble, Clue, Monopoly, Cranium. Not far from that vein, Hans says, is his own current favorite: Star Wars Destiny. It’s been immensely popular following the release of the new films. He points to several boxes of cards in the window. “I’ve been trying to order more,” he says of the cards, which have been in and out of stock since the store opened. “There’s a worldwide shortage.”

Maybe so, but there’s a local way to get around that: Saturdays, Hans hosts Star Wars Destiny open plays.

Sundays, meanwhile, are dedicated to Pokemon, another perennial favorite that has surged in popularity thanks to Pokemon Go. It was Pokemon that first made Hans long for a gaming community, as a child in Fairway, where the nearest place he could meet up with other players was more than 30 minutes away.

“I wish this place had been here then,” he says, glancing around his shop. “I was born in 1994, so I’ve never known a world without Pokemon.” (I tell him that I can, in fact, remember a world without that game, but I do not elaborate on just how many years of my life were Pikachu-free.)

The store also has an extensive selection for kids, many made by Peaceable Kingdom, which focuses on games that teach children how to cooperate and name their emotions, among other life skills. Remembering how my brother always spent our childhood Monopoly nights with a $500 bill tucked up his sleeve, I didn’t think learning how to cultivate kindness sounds bad.

To encourage more community building in the new year, Hans plans to host regular game nights for kids and adults, giving everyone the chance to find something they like — or at least put down their phones and interact with fellow humans for a few hours.