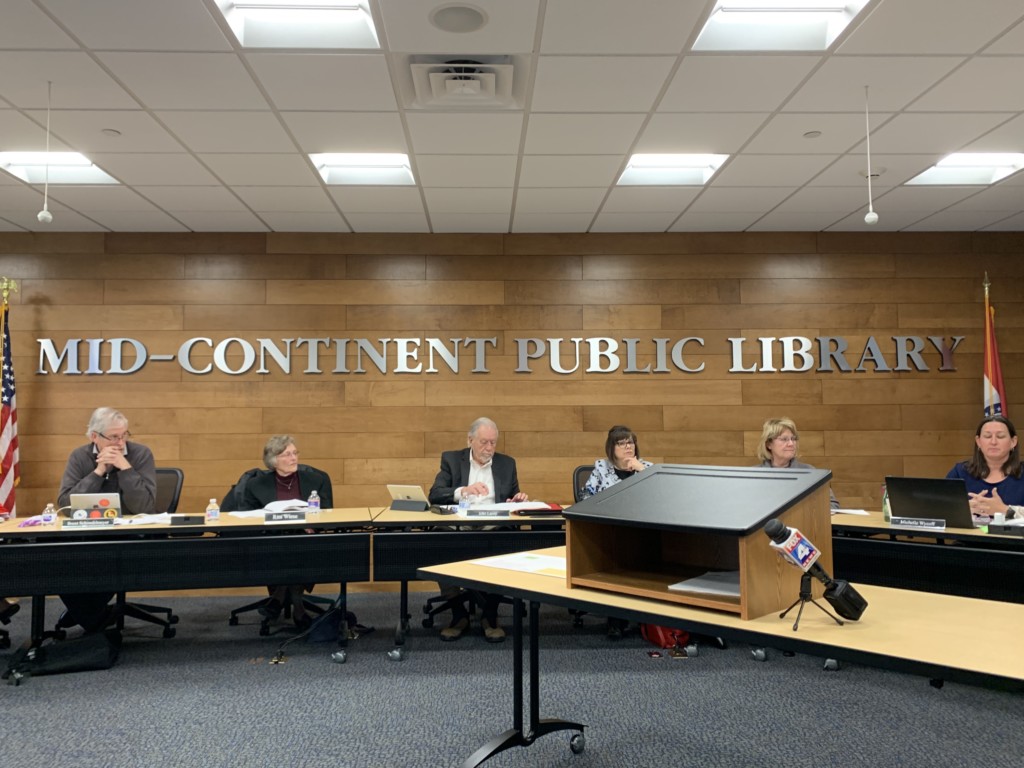 It’s typically pretty easy to find a seat at the monthly meetings of Mid-Continent Public Library’s board of trustees. Tuesday’s meeting, though, was standing room only.

The unusually high attendance followed the recent publication of an editorial by one of the library’s board members in a Platte County newspaper. The editorial criticized Mid-Continent’s LGBTQ-centric materials and programs like Trans 101.

“A once-safe community setting known as the public library has become a space that, in the guise of intellectual freedom, wants to change thinking on voyeurism and gender confusion, while promoting materials and programs that lead children toward being sexually exploited,” wrote Rita Wiese, who represents Platte County on the MCPL board.

Later in the editorial, Wiese calls the United Nation’s LGBT rights advocate Vitit Muntarbhorn a “homosexual activist” and blames “globalists” who “wage war on the family and religious foundations to protect the ‘diverse’ from stigma” for changes happening at the library—i.e., a class educating people about trans issues.

Wiese went on to encourage residents to attend the November board meeting and voice their concerns about how the library is spending taxpayer dollars.

Dozens of taxpayers answered that call on Tuesday.

“I went to the Blue Springs South library for the Trans 101 talk and waited until the presenter allowed questions, of which I asked a couple,” Helen Rozgay, a Sugar Creek resident, told the board. “Several librarians came up and accused me of being disruptive and asked me to leave … I told the speaker that I grew up as a tomboy and loved playing my sports but didn’t feel I was a male in my female body. This goes to show there is not equal time to defend my side of the very sad thoughts of people trying to play God.”

Another resident applauded Wiese for penning the editorial.

“Thank goodness we have a least one person of sound mind, lucid rationale, and willing to say what needs to be said,” Jim DeJarnatt told the board. “I want to congratulate Ms. Wiese for stating what the overwhelming majority of Platte Countians and Americans believe and support.”

But many members of the public who attended Tuesday’s board meeting were enraged by Wiese’s actions.

Inoru Wade, a Gladstone resident and Ph.D. student studying public affairs and public policy, called for Wiese’s removal from the board.

“This was unethical. It was intimidation. It was intellectually dishonest, and it violated four of your (MCPL’s) provisions,” Wade said. “Listening to some of the things said today, it is very apparent that some people do not believe this is a public library, but their specific church. There are over 100,000 LGBTQ people within the library district, and they pay for this service as well.”

Erin Davies, a Platte County resident who spoke to the board, said she was shocked and embarrassed by what she read in the Platte County Landmark, and that she and her husband are proud to support programs and materials geared toward the LBGTQ community.

Another member of the public voiced concern about the lack of public response from the rest of the board members in the days after the editorial was published.

“When Ms. Wiese posted her editorial, there was no official board response,” Mike Hedley told the board. “The only thing the board is associated with right now is that hateful and ignorant editorial, and that is not OK. The silence speaks volumes.”

After the board meeting, board president Michelle Wycoff released a statement.

“The Mid-Continent Public Library Board continues to hear comments about its recent library program providing factual information about transgender issues,” Wycoff said. “While individual board members may have publicly shared personal opinions about the program, these are not the position of the library board.”

In an email to library staff obtained by The Pitch, Wycoff wrote, last week, “I can’t defend Mrs. Wiese’s letter, language, or her decision to sign the letter as a representative of the library board…Mrs. Wiese’s letter may have raised uncertainty about the library’s leadership, whether you can trust us, and whether we care about you. Please let me assure you that we do care about you, each of you, without exception.”

In another email obtained by The Pitch, MCPL’s Library Director and CEO Steve Potter told staff: “I can assure you that Board Members do not like being characterized in a way that does not agree with their position or does not represent the agreed upon will of the Board. I feel very certain that the Board will manage this current issue internally.”

Members of the public requested a special meeting with the board to further discuss the future LBGT programming, but the board has yet to announce such a meeting.

“I can think of no better place to be educated on what is going on in the world than the library,” Rev. Sarah Wimberley of Northern Blvd. Methodist Church in Independence, told the board. “I want my tax dollars not to be influenced by religion, but to be influenced by logic. I want to know my money is going to all kinds of programs and opportunities.”