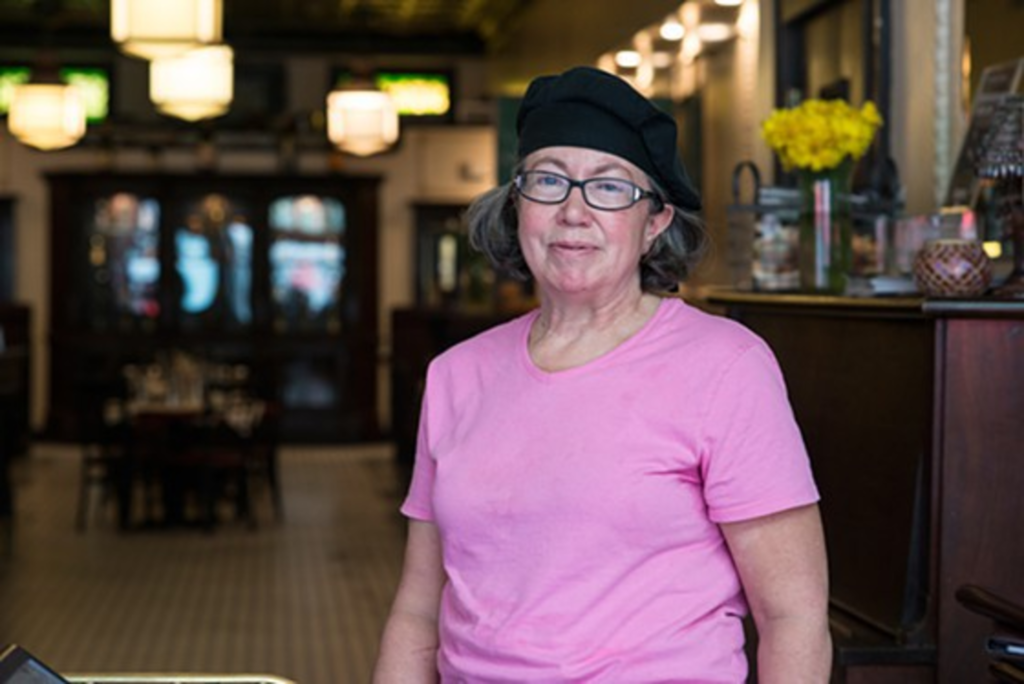 Chef Liz Huffman had a gut feeling that a help-wanted post on Craigslist would lead to the right job for her. Huffman’s instincts were good. The gig was at the Majestic Restaurant (931 Broadway), and it would start with an unusual task. The Majestic’s owner, Frank Sebree, was looking not for an executive chef but for someone who could create a new breakfast and brunch menu. The challenge: The Majestic had never offered breakfast or brunch before.

“Frank told me he was looking for a chef who could be very creative, with a more diverse culinary background,” Huffman says. It’s working out just fine. She has been with the Majestic for two years, and Sebree just promoted her to the executive chef position. (Jim Nelson, the longtime executive chef at the Majestic, is taking a sabbatical from the industry, Sebree tells me.)

Huffman is also taking on executive chef duties at Sebree’s new bakery-restaurant concept, Baked in Kansas City – it’s scheduled to open this fall in the former Napoleon Bakery location in Westport and will offer breakfast, lunch and dinner. Huffman can’t say much yet about her plans for that location (“I’m working on a lot of different ideas right now,” she says), but she still likes a challenge. Even as she formulates a plan for Baked, she’s putting up a new menu at the Majestic in September.

“We’ll still be embracing our reputation as a steakhouse,” she says, “but we’ll offer many more specials reflecting the seasonal fruits and produce.”

When Huffman was the executive chef at the Blue Bird Bistro, from 2002 to 2007, she completely changed the menu of that predominantly vegetarian venue at least three times a year. But her changes at the Majestic, she says, won’t be that dramatic.

Huffman does, however, like a certain theatricality in her dishes, a preference formed by the run of nontraditional cooking jobs on her résumé. She worked stints preparing food on research ships in Seattle, San Diego and Alaska, and she served an apprenticeship on an organic farm in Washington state. “I lived in a tiny cabin where I had to haul my own water, use an outhouse, and had just enough electricity to power a radio,” she says.
Huffman is a KC native, but her family moved during her childhood to Oklahoma and, later, Delaware – in the First State, she had her first executive chef job at a historic tavern. She was in her 20s, and she had found what she wanted to do.

“I went to college for a couple of years,” Huffman says, “but I wasn’t ready for it. I’m a late bloomer. Cooking was a more natural fit. It gets in your blood because it’s the perfect combination of the physical, the creative and the intellectual.”

But she was still a vagabond, and she spent her 20s and 30s packing up her truck whenever she felt the need to move, then taking cooking jobs wherever she landed. Her journey brought her back to Kansas City in 2001. A year later, she was hired at the Blue Bird by owner Jane Zieha.

“Jane had a vision for a restaurant serving food from local, organic or sustainable sources,” Huffman says. “But she told me that even with those parameters, a Kansas City restaurant had to also serve meat and martinis.”

After five years in Zieha’s kitchen, Huffman took a sabbatical to care for her dying father in Maryland. After his death, she brought her mother back to Kansas City with her and took a culinary position with a senior-citizens facility in Kansas. A few years later, she was ready to jump back into a more mainstream restaurant position. She looked at Craigslist. She found the Majestic.

“The breakfast business never really took off,” Huffman says, “and we stopped serving that morning meal. But the Saturday and Sunday brunches have been successful.”

The Majestic sits in the 19th-century Fitzpatrick Saloon, and the building and its historic aura continue to interest Huffman. So her updates to the menu will reflect what she says is the place’s “reputation as a retro steakhouse.”
“I don’t want to get campy about it,” Huffman explains, “but I am looking at some recipes from earlier decades to bring in a little more of that flavor.”

She hasn’t settled on a menu for Baked in Kansas City yet, but the challenge of overseeing both restaurants excites her.

“Do I see myself cooking 10 years from now? Yes, but not the way I’m doing it now,” she says. “I’m getting a lot better about taking what’s in my head and putting it in someone else’s head. That’s how you build a great kitchen crew.”