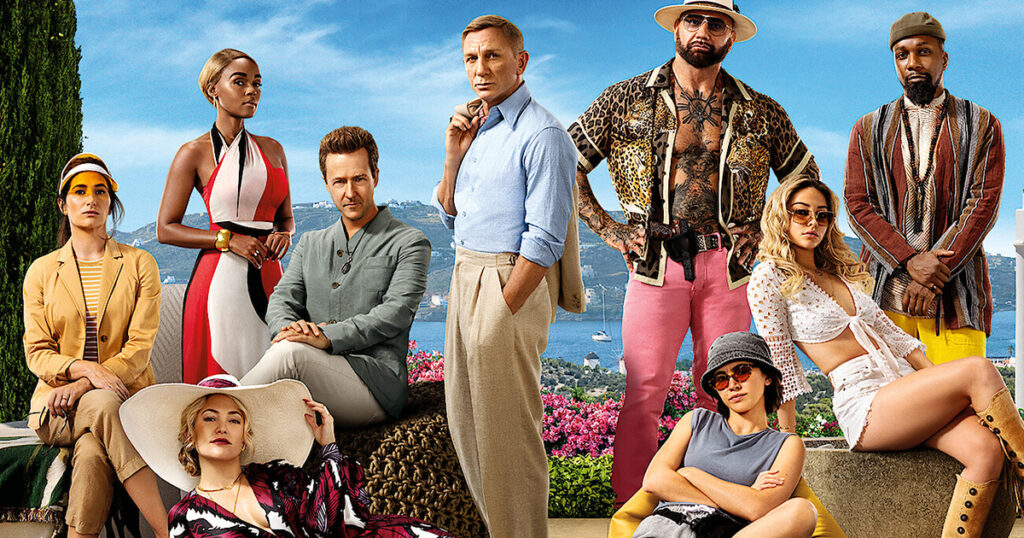 It’s been a while since a movie gave us exactly what it promised, especially sequels to beloved cinema entries. The sequel to Knives Out is another chance to watch Daniel Craig don the persona of classic detective in Agatha Christie-esque whodunnit proceedings, and with that as goal, Glass Onion is wildly successful. The original Rian Johnson film reclaimed the genre of crowded group murder mystery with a decisive twist of the blade, and this second entry solidifies our need to see the rest of the proposed six film series.

Benoit Blanc (Daniel Craig) is bored in a life devoid of a great mystery. Luckily for him, one is about to fall into his lap. Flown to a Greek island, Blanc finds himself in involved in a faux-muder mystery game involving prankster billionaire genius Miles Bron (Edward Norton) and his group of eccentric friends… and folks personally invested heavily in mooching from his success. That setup is just one of many ways that Onion becomes both a familiar story for the series and equally an inverse-opposite.

Blanc’s silver screen sleuthing is only ever as good as the comrades he has to play from. His sparring partners for this round feature a delectable cast of high-profile character actors, each with a few tricks up their sleeve.

There is Duke (Dave Bautista), a right-leaning YouTube persona, his partner Whiskey (Madelyn Cline); Governor of Connecticut Claire (Kathryn Hahn); Model turned lifestyle brand leader Birdie (Kate Hudson), once a model,  her assistant, Peg (Jessica Henwick); a scientist named Lionel (Leslie Odom, Jr.); and the black cloud hanging over the proceedings in the form of former freindgroup member Cassandra Brand (KC’s own Janelle Monáe). Together, these bold individuals are in for a bloody bad time.

The less said about the specifics of an intricate murder mystery are, of course, for the best for you dear reader—a watcher who deserves to enjoy every little twitch as our stand-in hero solves the puzzle box of what the hell is going on. What we can offer up is that this is a much sillier version of the formula you may be expecting, and there’s nothing wrong with that. This has the same mouthfeel as Knives Out, albeit a different brand of the same liquor.

What also needs to be celebrated here is how timely a film that seems to take perfect aim at the faux-intelligence of certain eccentric billionaires feels as it lands during the downfall of Twitter. A delightful surprise, indeed.