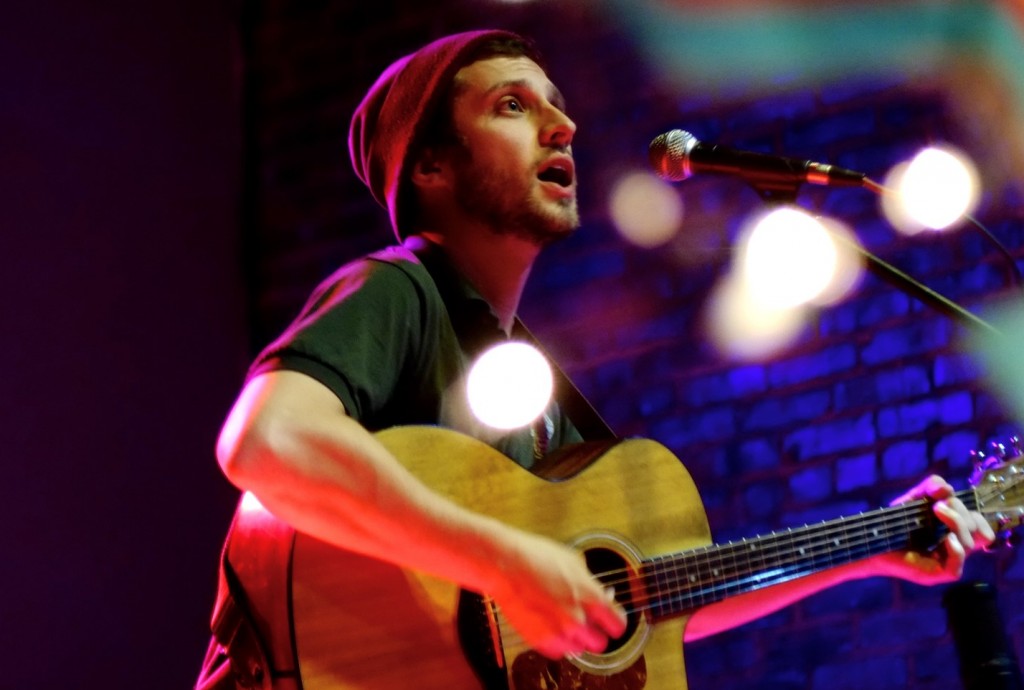 One year ago, concerts went away, putting the artists who play them and the venues and crews who make them happen at a year-long standstill. // Image courtesy of Fritz Hutchison

A year ago, alongside cover band Lorna Kay’s One Night Stand, Fritz Hutchison played what would later become his last live show for the foreseeable future.

It was March 13, 2020- Friday the 13th. For those who are superstitious, Friday the 13th typically brings a sense of foreboding or doom, but that usually goes away after the day ends.

This time it didn’t. A string of canceled shows for the next week would follow, but Hutchison didn’t know that yet. He just knew something was off.

“You could kind of feel it in the air,” Hutchison says. “It was very ominous. We were just kind of doing this show that we didn’t know was going to be the last one.”

That week, the World Health Organization declared COVID-19 a pandemic. Two days later, it was declared a national emergency for the United States. The beginning of countrywide shutdowns, stay-at-home orders, and distancing regulations darkened Kansas City’s stages and paused live music as we knew it.

For artists who had just released music at the pandemic’s start, this created a unique loss of getting to promote the new music to a live crowd. Hutchison’s “Wild Wild Acres” hit Spotify on March 27, 2020. Plans for the album’s release show the next day were canceled, taking away Hutchison’s first chance to perform it.

“I just had all these fantasies about how great the show was going to be,” Hutchison says. “I was really proud of the record, you know, and I still am, but I felt a little robbed.”

The Pedaljets released “Twist the Lens” weeks before, their first album release in seven years. They played it twice live before they’d lose the opportunity to, but to Pedaljets drummer Rob Morrow, putting that album out into the world only to have it almost immediately followed by a pandemic was still a disappointment.

Their audience, Morrow says, had been almost more receptive to ‘Twist the Lens’ than any of their music before and to have to suddenly stop performing it for them was bittersweet.

“It was like a curse,” Morrow says. “People were saying this was the best album yet.”

The Pedaljets were gearing up for a number of shows and radio station promos right around the time that groceries started flying off the shelves in March. The band began to have doubts about whether even gathering in the studio was safe. Although most of their planned shows canceled themselves due to the increase of COVID-19 regulations, the surge in mass purchases of toilet paper was the band’s final decision factor to not tour.

“I just remember how it kind of came to an end,” Pedaljets lead vocalist Mike Allmayer says. “It felt like it did for the dinosaurs, like an asteroid hitting. Everything just stopped dead.”

Marty Hillard of Ebony Tusks remembers his band’s last live show in Kansas City, a Mills Record Company show on March 7, 2020. The show ended a weekend-long series of concerts that raised funds for queer-led and queer-centered nonprofit organizations. A year later, Hillard says the volume of the band’s loved ones and community supporters there in the audience at that concert to celebrate their new single, “HDF”, still sticks out to him.

“We never take that for granted,” Hillard says. “Given the circumstances that followed as a result of COVID-19, that’s even more true.”

While Hillard was relieved to get to play their final shows, he says he also experienced concern about what the audiences at those shows meant for possible COVID-19 exposure in the community. Before firm guidelines were set around crowds and events, many local artists had to start to make decisions on their own about how to proceed with performing or not performing their music.

These weren’t easy decisions and it wasn’t just one musician facing them. The pandemic halted all of the city’s local music scene at once.

“You always think that if something’s gonna happen that’s gonna end your career, it’s going to be a personal matter,” Hutchison says. “The most boggling part about it is that it’s happening to everybody. It’s nobody’s fault and it’s everybody’s problem.”

Navigating COVID-19 left musicians to decide where to put their time and effort in the months that followed. As they started leaving the stage, the venues that hosted their shows felt their absence.

The Riot Room celebrated 13 years in Kansas City’s Westport district this week. Its 13th year was going to be an epic one full of shows on the bar and concert venue’s indoor and outdoor stages, says owner Tim Guhschenritter.

Instead, Guhschenritter says, this past year could be summed up by the phrase “survival mode”. After having to let all of the bar’s staff go, Tim and his brother Dallas Guhschenritter began running the bar completely on their own.

“When you’re in a place that primarily your main source of income is live music, you know, it’s a tough business,” Guhschenritter says. “We had over 90% of revenue just completely diminish.”

Now the bar is able to open 6 nights a week with precautions in place and limited capacity. The community has rallied around The Riot Room to help keep them afloat through GoFundMe donations and general support, but Guhschenritter says he still misses connecting with Kansas City over the shows that once played there.

“Our stage has been dark for a while,” Guhschenritter says. “I think art is what makes people feel good and I think music has an energy to it that is just unlike any other art form. I think it gives people a sense of purpose.”

After the initial shutdown, the Lawrence Arts Center moved activities into the digital space as much as possible and utilized community partnerships to start putting on live distanced shows at different outdoor venues. Elizabeth Sullivan, Director of Performing Arts at the LAC, remembers an early determination not to let performing arts and music stop even if they had to look different.

Coming from a family of musicians and being a lover of music herself, Sullivan says she kept an eye on what musicians in other places were doing to keep live music going. Then she found out about the concept of drive-in shows. The center’s first drive-in show with local Americana artist Sky Smeed sold out and from there, the rest was history, Sullivan says.

The LAC also began implementing pay-what-you-can programs for shows for the first time this year. It felt like the perfect opportunity to provide extra options in a time where one ticket price didn’t necessarily fit everybody, Sullivan says.

Just like the financial burden of COVID-19 may have made it more difficult for some to pay for a show ticket, it has changed things on a widespread scale for the music industry. The Save Our Stages Act gave many independent venues hope in December that the sinking industry would be saved, and the momentum continued this month with the promise of upcoming Shuttered Venue grants. The Small Business Association plans to open the grant program up for application at the beginning of April, which could lend some help to some of Kansas City’s most beloved live music spots.

Even so, the closing of doors for larger venues left countless employees without a source of income, including the crews, technicians, and contractors that ensure concerts run smoothly and aren’t eligible for the same aid that the venues themselves are. But Guhschenritter is excited to watch those employed by the music industry get their footing back, he says, and he’s excited for the return of the normalcy of a shoulder-to-shoulder concert crowd.

“It’s gonna be emotional, but it’s going to be a sense of normalcy that I think everyone is kind of yearning for,” Guhschenritter says. “Kansas City’s music scene is super strong, I think it always has been. And I can’t wait for it to be thriving again.”

While on unplanned hiatus from performing in person, Kansas City artists adapted to a new normal this year and weren’t without music altogether. Hutchison tried his hand at livestream concerts, and he plans to keep working on his next album in the near future. Ebony Tusks finished and released Heal_Thyself, an album that had been in the works for four years. The band also submitted a performance to NPR’s Tiny Desk Contest and recorded a remote live performance following the album’s release.

“We love music a lot but there are rare circumstances such as this where we recognize our greater duty to our loved ones and communities,” Hillard says. “With that said, files have been shared, music is being made, and technology is helping keep us sharp.”

Allmayer has spent time writing new music and says the shutdowns have actually increased his productivity. Pedaljets bass player Matt Kessler says the continued progress of vaccine distribution might mean the band could be booking studio time again, something he looks forward to on top of bringing new music back to the stage again.

“There’s an energy that you get from an audience that you don’t get anywhere else,” Kessler says. “There’s nothing quite like that.”

As vaccine rollout continues in Kansas and across the country, both those who play concerts and those who have an offstage hand in making them happen are inclined to wonder what’s next.

In preparing for upcoming events at the Lawrence Arts Center, Sullivan finds herself asking that question often. It’s one she hasn’t yet answered, but she says she doesn’t think the future of live music or life, in general, will ever mirror what we saw before March of last year.

“I think that there’s the sense that everybody wants so badly to go backward and to live how we were living,” Sullivan says. “I just think that we have changed forever, and whatever that looks like is going to be its own thing.”

However that new normal looks, Sullivan thinks there will be room in it for new joy and positivity just like there was in how we lived before. But what it means for live music, she doesn’t know.

“I think that we’ll find out hopefully sooner rather than later,” she says.