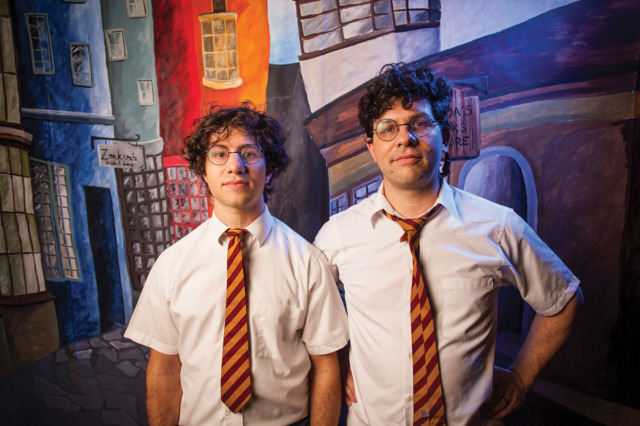 It’s been 13 years since wizard rock forefathers Harry and the Potters released their last album, Harry and the Potters and the Power of Love. Much has transpired in the Potterverse in the interim. For one, author J.K. Rowling put out Harry Potter and the Deathly Hallows, the final book in the series. Potter fans have also seen the release of four films adapted from Rowling’s series of books, along with a stage play in London’s West End, plus two movies in the spin-off series, Fantastic Beasts. Video games, a theme park attraction, everything that happens in the online fan universe — it’s a lot to take in.

This month, Harry and the Potters — the act is based on the premise that there are actually two Harry Potters, and they play together in a punk band and sing about teachers who are werewolves and other Hogwartsian problems — will release a double LP, Lumos. The album is a look back at the final book in the series, and it seems to explore the ways the themes of that book remain relevant today. One song goes: Back when we were young, it felt like a story … But then we grew up, and the world grew dark. I wanted to know more about what was behind those lines. Lucky for me, Paul DeGeorge — who founded the group in Massachusetts with his brother Joe back in 2002 — lives in Lawrence, where, along with his wife, Meredith Moore, he owns the downtown art shop Wonder Fair. We sat down at Decade for tea recently and chatted about how Lumos connects the dots between a 12-year-old YA fantasy novel and the Trumpy world reality we’ve found ourselves living in.

The Pitch: Why 13 years between albums?

Paul DeGeorge: I think it had a little bit to do with the way that our personal lives unfolded, more than anything. To contextualize: the seventh Harry Potter book came out in 2007, and our last album was 2006. That was an era when we were playing 120 to 130 shows a year on the road, so we were super busy.

At that time, we were fully employed by the band, and when we weren’t touring hard, we were at home working on the record. Then our lives moved into a different phase, where [Joe] was in college. And so, when he wasn’t in [school], we were touring. Then we just got further and further away from the book, and the band sort of took a backseat to other things in our lives. It became sort of the “weekend warrior” phase of the band where we would still tour, but it was two weeks at a time, as opposed to two and a half months. We hadn’t lived in the same city since 2006, really, so we just had to kind of carve out the time. We started having these shows where people were really responding to our political songs from past records, and the political climate just forced us to go back and re-look at the book, ’cause we were just like, “What is our place here, as a band in 2019?” And finally we just thought we could dig into these books in ways that have contemporary resonance.

It’s funny, because I was listening to Lumos, and even knowing about the press release calling it “an album for this political moment,” I was wondering where the politics were. Then I heard “No Pureblood Supremacy,” and it all clicked.

The last time I read [The Deathly Hallows] was in 2007, before we started working on the record, and as we started working, Joe was out here [in Lawrence], and we basically spent a week reading. We were sitting on the couch, reading, and we were making notes, and then we started writing. We were pulling out these themes we related to and wanted to touch on. The big ones in this political climate are “The Trace,” which is about the wizard surveillance state. There’s “On the Importance of Media Literacy Under Authoritarian Rule,” which is about the way Voldemort uses the media to his advantage. There’s The Daily Prophet, which in the wizarding world, sort of becomes state-run media, and the people who are working there are afraid to push back on authoritarianism and become this sort of mouthpiece for the Pureblood supremacist platform.

You’ve been in the world of Potter fandom for a long time. But over the last 13 years, there’s been this explosion of media attention and content related to the Potter books. What’s it been like returning to the books after all that?

I don’t think I’m alone in this experience, but I feel like contemporary fandom can carry a lot of baggage. To jump back into the book, it feels like a much more pure experience. All of that becomes disconnected when you’re just there, with the book, so it was just a really joyful experience to be re-reading the book again. Whatever you think of J.K. Rowling’s Twitter platform or post-canon material [laughs], the books are still there for you, so just jump back in.

Is there a way to categorize Potter fans? Like, movie fans, and book fans, and maybe those who appreciate the way the two things intersect and diverge?

I wouldn’t pigeonhole fans into those two or three categories — or, I would just add to them. In terms of the Harry Potter fan phenomenon as a whole, there’s a sort of corporate experience of that, and then there’s a fan experience that is frequently much weirder and more organic. Henry Jenkins, a media theorist who focuses on fan culture, has a famous quote that is, essentially, “Fan works exist in order to correct the flaws inherent in an original work.” So, that’s why you see race-bending and a lot of queer characters in fan fiction, because those are elements which are such a major part of the human experience which are frequently overlooked because of whatever biases there are on the author’s side. And that’s why people love fandom so much.

Would you say that Harry and the Potters exists as a way of expressing your own headcanon, then?

In some ways, yeah. The premise of our band is that there are two Harry Potters that are fighting evil with the power of rock ‘n’ roll. It really stems from when I was first reading the books — I just had this idea like, Harry Potter has this sort of anti-authoritarian streak, where he’s not afraid to break the rules when the rules are wrong. It’s true of his friend group as well: Hermione, while she’s frequently by-the-book, also knows when the book is wrong, and she’s not afraid to confront that.

I just had this thought in my head that Harry should have his own rock band, just fronting it up there like Henry Rollins — real aggressive. Harry has his angsty phases. I could see it. So, yeah, that was my headcanon: Harry in a punk band.

Lumos is out on CD, double vinyl LP, and digital download on Friday, June 21. Harry and the Potters perform at Shawnee’s Monticello Library on Wednesday, August 14.