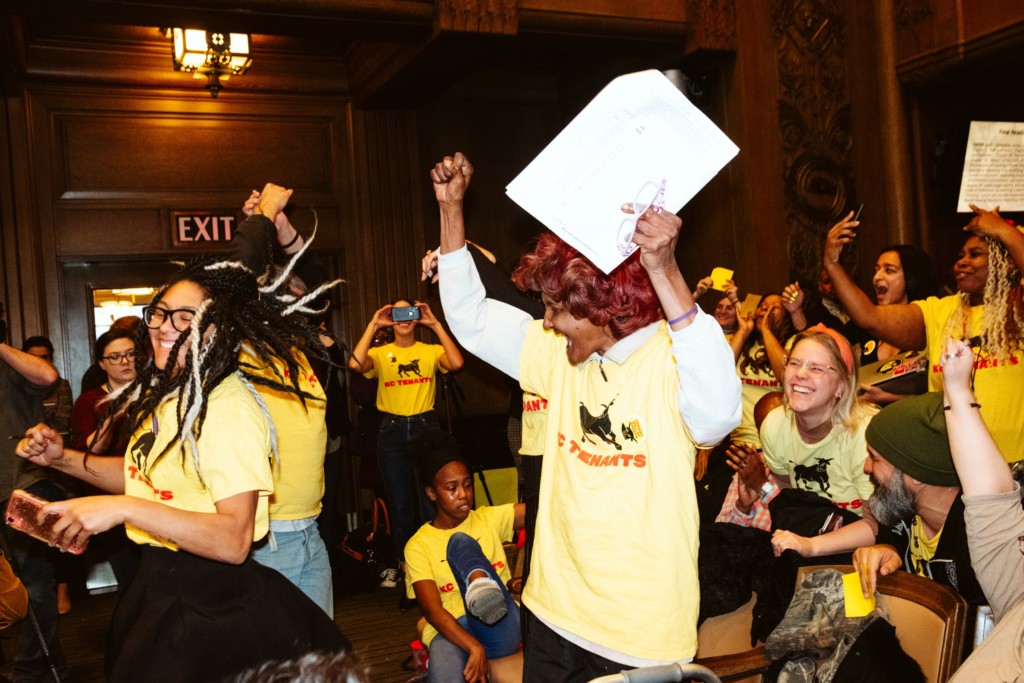 The sound in the council chambers was deafening—whoops, hollers, and chants from over 100 supporters of KC Tenants—on Thursday afternoon as the Kansas City, Missouri City Council voted to pass a tenants bill of rights package on Thursday.

The resolution passed, 12-1 (1st District Councilwoman Heather Hall voted against) and the ordinance passed 10-2 (Hall and 5th District At-Large Councilman Lee Barnes Jr. voted against; 2nd District At-Large Councilwoman Teresa Loar abstained). The resolution establishes a tenants bill of rights in the city and promises a commitment on the part of the mayor and city council to enforcing existing and new tenant protections. The ordinance establishes a Division of Housing and Community Development at City Hall that will enforce the tenant protections in the bill of rights.

“This is such a huge, huge thing,” said KC Tenants leader Tiana Caldwell, who helped draft the package and has been personally impacted by eviction discrimination. “This is what democracy looks like, right? Housing is a human right, and we have revolutionized the way that policy is made.”

The ordinance also bars landlords from discriminating against and denying rent to a tenant solely on the basis of prior arrests, convictions, evictions, source of income or because of a protected trait which includes race, color, religion, national origin, sex, mental or physical disability, marital status, familial status, age, sexual orientation or gender identity, gender expression, ethnic background, and being a victim of domestic violence, sexual assault or stalking. It requires landlords to disclose any past issues with the unit; provide resources for a tenant to get an estimate of utilities; and requires the provision of at least 24 hours notice to a tenant before entering their unit.

Many property owners opposed the bill of rights package.

“One of the biggest concerns is creating a whole new department that actually duplicates what other departments are already out there to do,” Stacey Johnson-Cosby, who owns about 20 rental properties, told The Pitch. “And the way some of the housing providers or landlords are looking at it, it’s just one more place that tenants can go to complain about us, and we think that’s unnecessary.”

Proponents of the package say that placing all of the existing tenant’s protections under one division will make it easier for tenants to find and defend their rights, and many of the protections listed under the ordinance are new to city code.

“The 12-1 and 10-2 votes were even better to me than a unanimous vote because it means the opposition was still there, they had their voice heard, and they got council people to agree with them, but it was still 10-2, ” KC Tenants leader Robert Richardson said. Richardson served nine years in prison, and because of his record, it took him two years to find a place that would rent to him after he was released. “It means that we have such a resounding platform.”

The tenants bill of rights package will go into effect in June 2020.