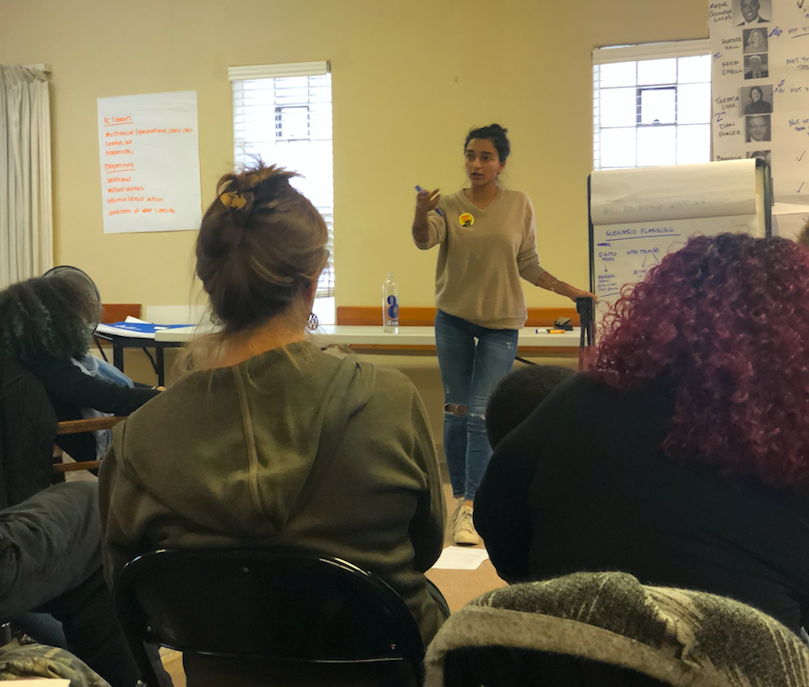 Gary Thomas doesn’t live in KC, and he’s not a tenant. He owns a home in Lee’s Summit. But the 38-year-old union member—United Auto Workers Local 249, Ford assembly plant, Claycomo—has been working with KC Tenants since he first encountered the housing advocacy group during the recent General Motors strike at the Fairfax plant in Kansas City, Kansas. Like Thomas, members of KC Tenants showed up on the picket line in solidarity with the GM strikers.

“I started asking about their organization and what they were trying to accomplish,” Thomas told me recently. “And I thought it made a lot of sense. I grew up moving from house to house. I was in situations where landlords took advantage of me and my family. It made our lives difficult. It wasn’t until about six years ago, when I was able to join a union, that I was finally able to access collective power, so to speak, and get out of those situations.”

He went on: “To me, KC Tenants is like old-school unionism. It’s about changing the dynamics for working-class Americans. It’s about building power, rather than relying on power to be given to you by corporations and CEOs.”

Thomas is now a regular at KC Tenants’ weekly meetings, which are held on Saturdays at the SEIU office near 45th Street and Dr. Martin Luther King Jr. Boulevard. Tara Raghuveer, who founded KC Tenants after moving to KC from Chicago at the beginning of this year, says about a dozen people turned up for the group’s first meeting, in February. Last Saturday, when I stopped by, I counted about 50 people—black, white, and brown; purple hair and yarmulkes; small children, tattooed millennials, and seniors—in attendance. Latecomers continued to trickle in; eventually, one of the organizers hustled out to her car to retrieve more chairs to accommodate the crowd.

The mood in the room was cautiously buoyant, the proceedings a mishmash of detailed strategizing and spontaneous bursts of protest-style chants. In just a few days, KC Tenants would be holding a rally to launch its proposed Tenant Bill of Rights package—an ambitious piece of policy that, if passed, would dramatically alter housing dynamics in Kansas City, a place where 48 percent of the population rents. At the front of the room, two members stood on chairs, taping huge paper printouts to the wall that included photos of Kansas City Mayor Quinton Lucas and all 12 KCMO City Council members. Beside each council member’s photo were multiple columns filled with yeses and nos, checkmarks and X’s, indicating whether the council members had attended a KC Tenants meeting yet, and whether they were a likely yes or no vote on the Tenant Bill of Rights.

There were a lot of yeses and checkmarks up on those sheets of paper.

“The devil is in the details, obviously,” Raghuveer told me a few days later, “but we’re very optimistic that the package will pass out of housing and make it to the full council, and at the full council we’re looking at eight [yes votes], if not more.” (At City Hall, seven votes gets you across the finish line.) 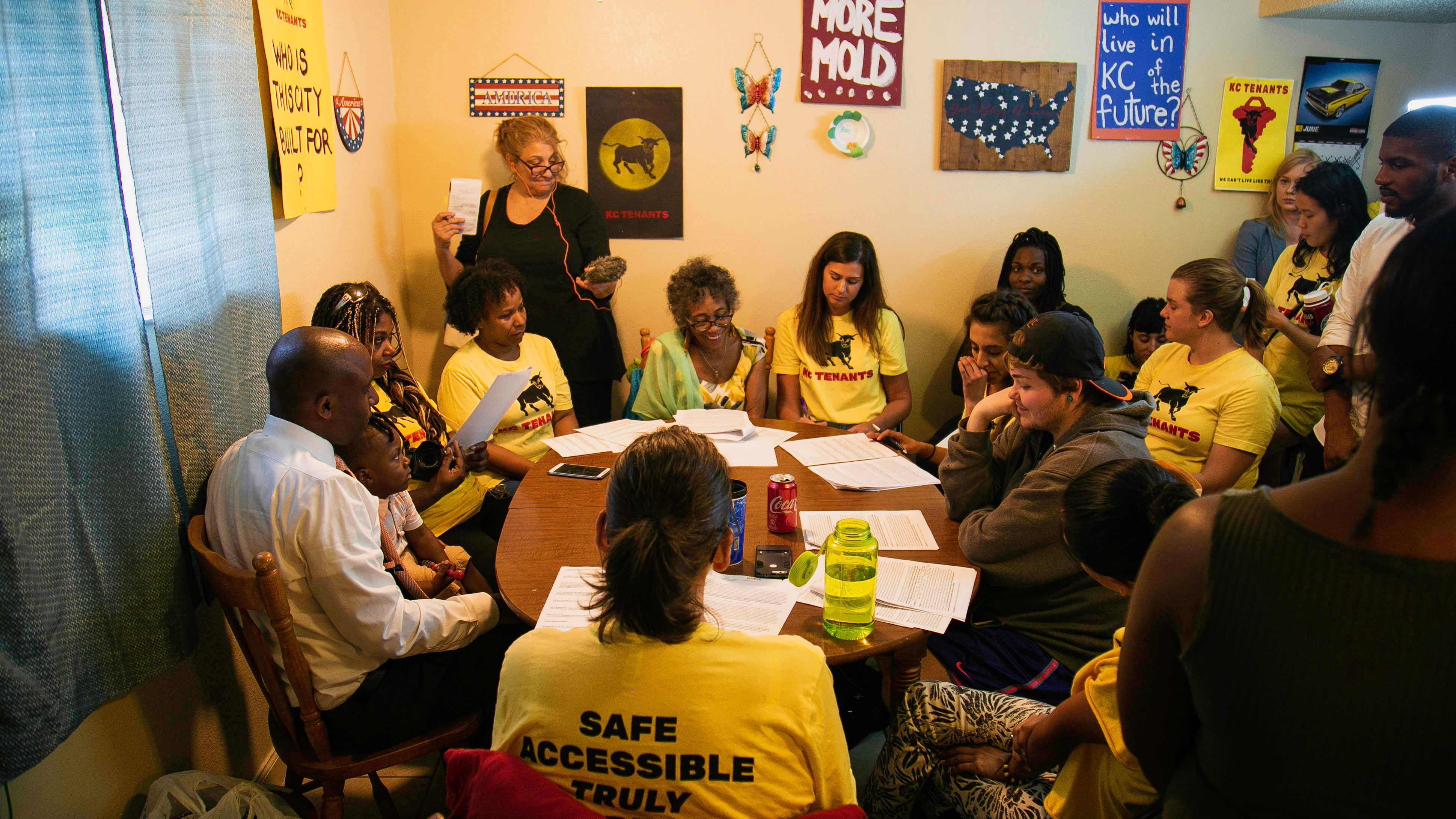 Lucas meeting with KC Tenants members. The new mayor has said he wants his legacy to be housing. // Photo courtesy of Lost Thought Productions.

By Kansas City standards, what KC Tenants is proposing here is borderline revolutionary. The finer points of the Tenant Bill of Rights will be hammered out in the weeks after the policy is formally introduced to the City Council on Thursday, but at the core of the package is the establishment of an Office of the Tenant Advocate. This new division inside City Hall would receive $1 million annually from the city’s general fund and, according to KC Tenants’ current proposal, educate tenants of their rights, provide legal support for tenants, establish a tenant center, and operate a tenant phone hotline. The office would also investigate claims about bad landlords and, notably, have the power to revoke their permits if tenant rights are found to be violated.

“Typically, cities fine [landlords] for violations,” Raghuveer said. But with corporate, out-of-state landlords rapidly expanding their real estate portfolios in the metro area, fines have become an increasingly feeble method of punishment. “It’s a drop in the bucket for them,” Raghuveer said. “Either they pay it, and it doesn’t change their behavior, or they never even pay it.” Stripping bad actors of their licenses, KC Tenants argues, is a more effective means of enforcement.

Additionally, the Tenant Bill of Rights package would include a new city resolution that would establish a right to counsel for low-income tenants, defined as those with incomes at or under 200 percent of the federal poverty line (about $25,000/year for an individual, $51,500/year for a family of four). The city manager would be required to allocate $650,000 per year to pay for lawyers to represent tenants in landlord-tenant disputes, including eviction. It would also become illegal to discriminate against renters based on previous evictions. Nor could landlords deny applications based on prior convictions. And landlords would be required to give prospective tenants a utilities estimate so that the true monthly cost of the unit could be calculated.

It’s early yet, but the essence of the Tenant Bill of Rights appears to have the full support of Lucas, who has been meeting regularly with KC Tenants since his election. Last week, several representatives of the group spent nearly three hours with the mayor’s chief of staff and his legal team, fine-tuning the final product. “We almost live in the mayor’s office practically,” Diane Charity, a KC Tenants leader, told the group at Saturday’s meeting, with a laugh.

The full package is unlikely to sail through the Housing Committee and City Council without modification. It will be vigorously opposed by groups like Landlords, Inc., and even some of its sturdiest-seeming supporters on the council (a group that, so far, includes Ryana Parks-Shaw, Eric Bunch, and Melissa Robinson) will likely take issue with various aspects of such a bold and progressive proposal. At the meeting on Saturday, Raghuveer gamed out various potential legislative scenarios and discussed what KC Tenants’ strategies might be if it began to look as though the council intended to hack their proposal into irrelevance.

“At some point, we may have to escalate, and that doesn’t just mean Facebook posts,” she said. “If they try to ignore this, or bore us to death, we will take this crisis to its creators and create conditions that make it impossible for them to ignore us. We don’t want to have to sleep on the steps of City Hall—but we will.”

KC Tenants’ Bill of Rights Rally is Wednesday, October 30, at 3 p.m. on the south steps of City Hall. More info on the event here.