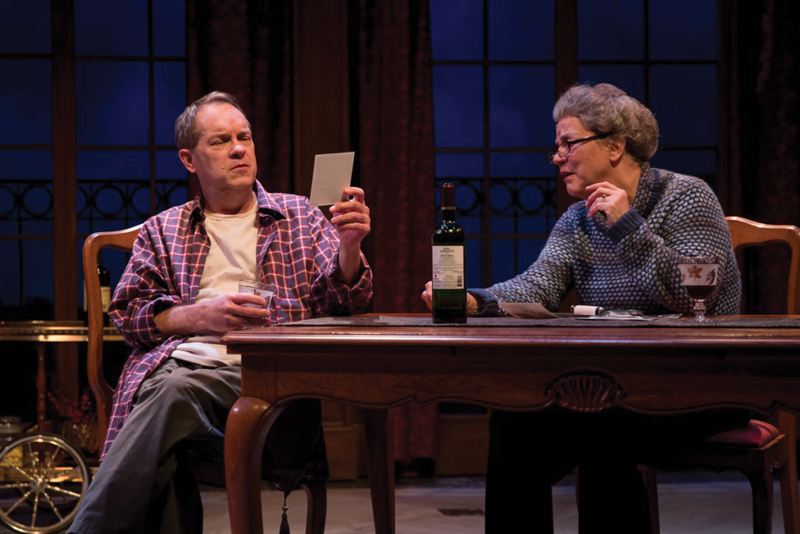 With a few exceptions, most contemporary dramas can be sorted into one of two camps: clean-lined plays confronting a social problem, or scripts trailing some moral mess to a big, chewy family confrontation. My Old Lady, by Israel Horovitz, fits solidly in the latter — but there are few greater theatrical pleasures than watching the Kansas City Actors Theatre smolder through its scenes.

At the play’s center is Mathias Gold (David Fritts), a native New Yorker and sad-clown Jew with a divorce for each of his unpublished novels (three). After the death of his emotionally distant father, Mathias empties his savings for a one-way ticket to Paris. He’s come to claim his inheritance, a cavernous apartment overlooking the Luxembourg Gardens. Slight complication: The apartment was sold to his father en viager, meaning Mathias can’t move in until the current tenant, 92-year-old Mathilde Girard (Kathleen Warfel), dies.

The first act is an amusing, if at times listless, collage of exposition and airy banter. Mathilde has no intention of dying anytime soon, and her daughter, Chloé (Jan Rogge), isn’t keen on Mathias hanging around like a vulture. But the early high jinks — phoning doctors for a heavenly ETA, translating the word “wang” — are tonal misdirection for the bitter, booze-soaked conflict to come.

Perhaps as a result, Fritts feels a bit rigid in the opening scenes, more rushed than reactive. As the play firms its footing, though, the actor unspools into a wounded, wistful boy. Fritts scorches through the second act, convincingly drunk and deliciously brazen. 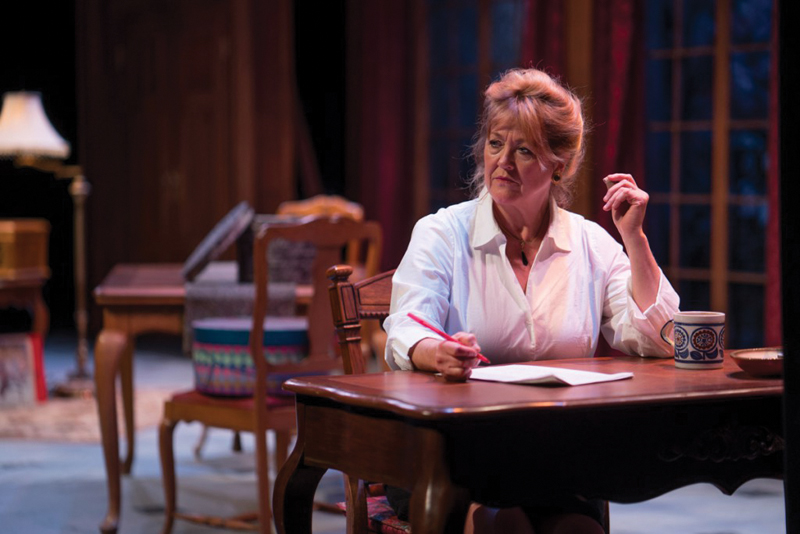 Rogge makes a charismatic foil as Chloé, a single schoolteacher with a Frenchwoman’s knack for icy invective. Rogge’s accent is unimpeachable, and in her care, Chloé’s steep emotional arc seems not only plausible but inevitable.

But no character is more beguiling than Mathilde, whom Warfel plays as equal parts impish and imperious. Although Warfel is far younger than Mathilde, she suggests age through precise patterns of speech and movement, whether peering purse-lipped through a magnifying glass, scolding in gravel-tinged Franglais or wheeling a tea cart with a stiff-backed gait. A slow-burn scene between her and Fritts had me transfixed, thanks in part to Warfel’s exquisite rendering of a woman too stubborn to acknowledge her mistakes and too tender to concede their consequences.

Director Darren Sextro keeps the action restrained, allowing the tension to build gradually. But with a strong assist from costumer Sarah M. Oliver, Sextro also smartly highlights subtle differences between French and American ethics and attitudes. As attached as she is to her childhood home, Chloé never seems fully at ease — she sips tea at the dining table, ramrod straight in her silk scarves and peep-toe heels. By contrast, Mathias is a boorish master of his (borrowed) domain, padding around the apartment in a gaping bathrobe and white athletic socks and slurring his words around the neck of a whiskey bottle.

Scenic designer Bret Engle and lighting designers Kylor Greene and Shelbi Arndt create a luxurious playground for the actors. Floor-sweeping red velvet curtains, warm parlor lighting and spindly, Queen Anne–style furniture make the apartment feel both dainty and dated. Jonathan Robertson’s sound design stumbles with a few cheesy door effects but scores with moody transitional music, much of which was composed and performed by the local trio Ensemble of Irreproducible Outcomes (curiously uncredited in the program). A low, woody sax and a pensive bass stroll through scene changes, creating an air of stylish, intimate melancholy.

Although My Old Lady debuted in 2002, Horovitz’s play feels much older, suffused with nostalgic bon mots and retrofitted to the turns and timing of the well-made play. The climax arrives when (and how) we expect, and loose ends are tied in neat dramatic bows. But the predictability doesn’t sacrifice satisfaction — or our investment in the dramatic stakes. Instead, the familiar structure lets Horovitz play fast and loose with morality, trading easy “lessons learned” for prickly ambiguity and meaty, master-class speeches.

Mathilde and Mathias both suffer from the pigheaded belief that they can see the whole picture from their corner of the room. The zoomed-out version, Horovitz suggests, isn’t any easier to digest. But in KCAT’s care, we have a fine time trying.