Review: KC Rep comes home with a captivating Of Mice and Men 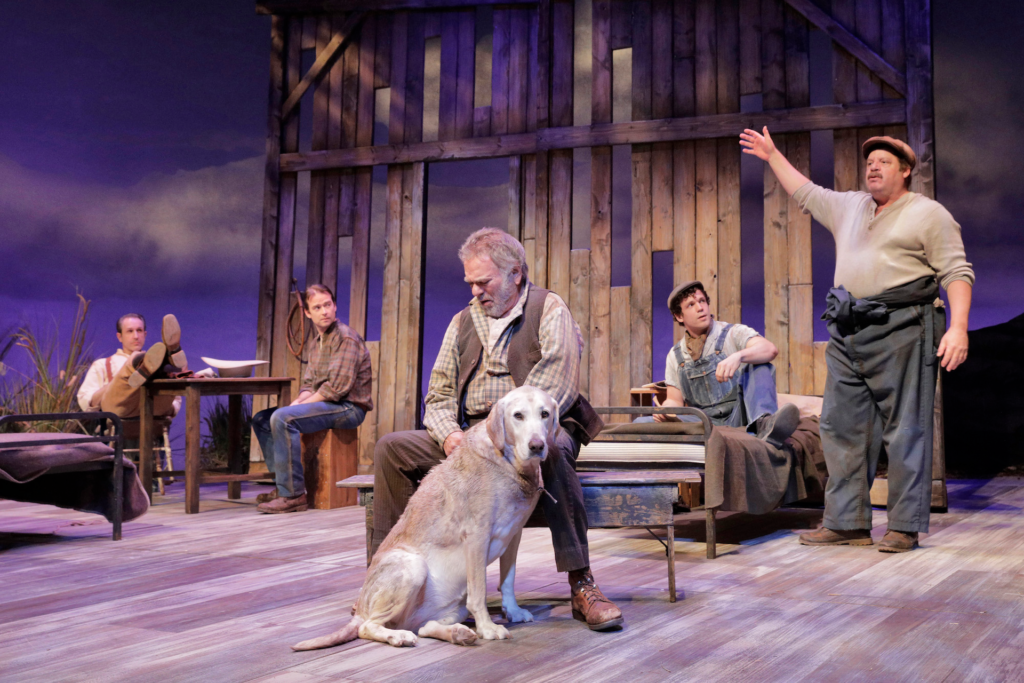 Of Mice and Men — the novel and the play adapted from it, by John Steinbeck — arrived in 1937, but the story isn’t bound by the era of its origin. Rich with symbolism and allegory while also strikingly real, the classic work teems with individuals who breathe with life as relevant then as now.

Much of our present day comes to mind while taking in Kansas City Repertory Theatre’s outstanding new production, about the lives of those with very little, meandering through life with few connections or none at all.

George Milton (Jake Walker) and Lennie Small (Rusty Sneary) are migrant laborers, traveling from job to job in California during the Great Depression. They dream of saving up for their own stake — a place to call their own, a place to be their own overseers. They’ve known each other most of their lives, and George looks after Lennie, a large mentally disabled man with notable strength — a combo that tends to lead him to trouble.

Of Mice and Men — the title comes from Robert Burns’ poem “To a Mouse”: The best laid schemes of mice and men / Often go awry — centers around their latest place of employment, after leaving just such trouble behind. 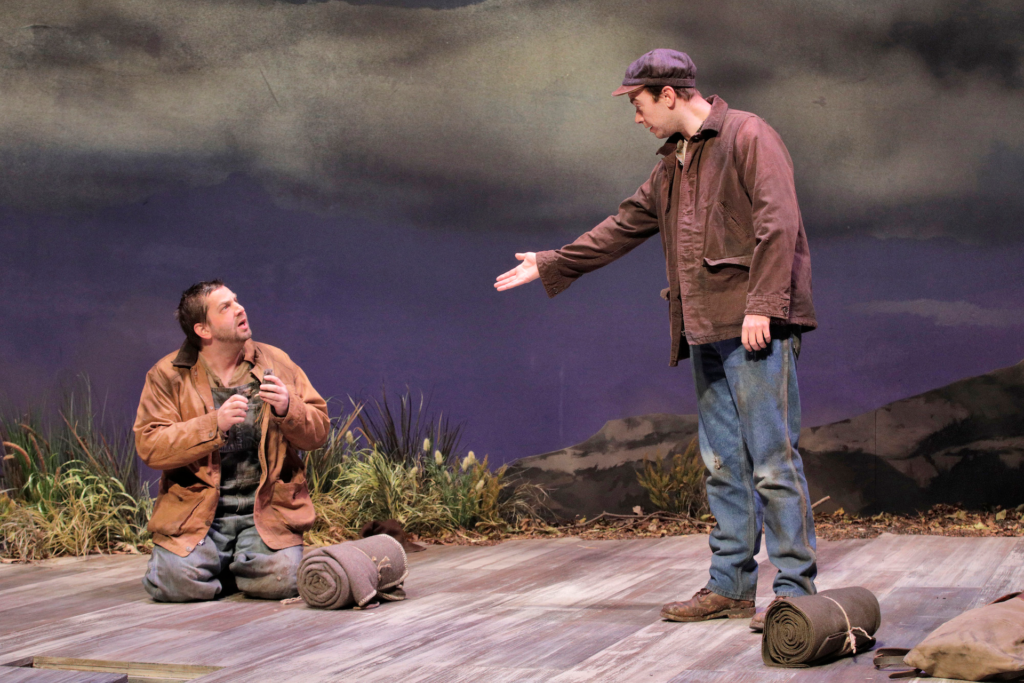 Walker’s George and Sneary’s Lennie dominate the story’s center and our emotional investment. From the first moments of Act 1, Scene 1, the actors together hold the play’s core. We see George’s sense of responsibility for his protégé from the play’s first utterances: “Don’t drink so much,” George tells Lennie, who gulps uncontrollably from a stream. “You gonna be sick like you was last night.”

They see the mutual dream of their own place through Lennie’s hopeful eyes. Sneary’s Lennie endears himself to us, breaks our heart, makes us scared for him. The world is no friend to a simple, mentally challenged man with the strength of Samson. And Walker is both sensitive and solid, his George struggling between the pull of a life free of Lennie and the force of the bond they share, as he tries to watch out for Lennie and protect him. 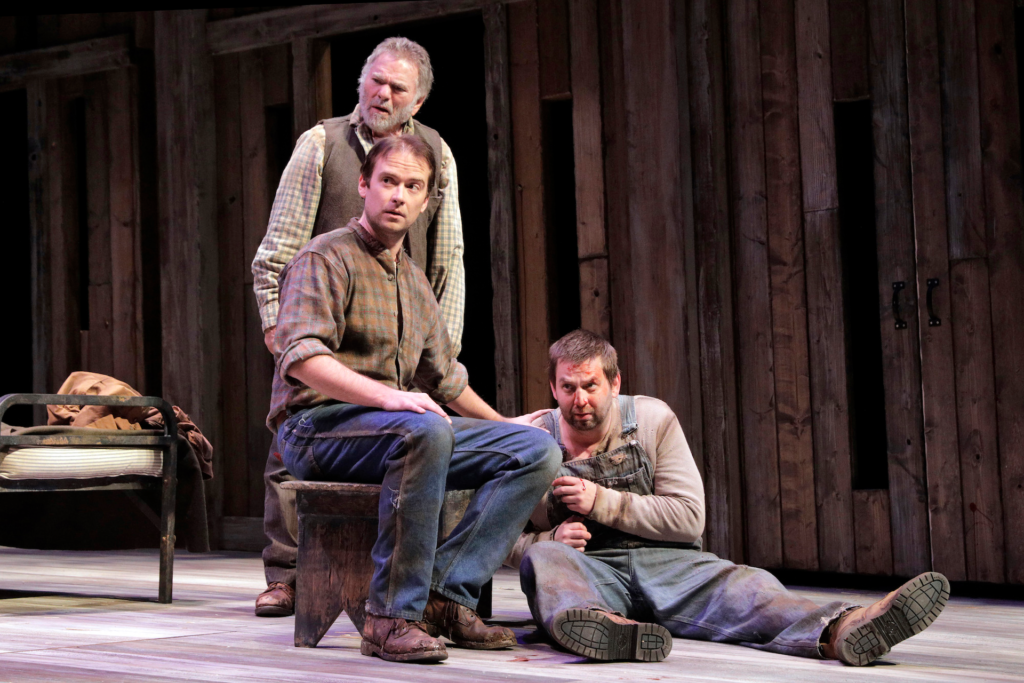 The several supporting players draw their characters with singular focus and strength. Robert Elliott’s performance is at times soulful and sad as the one-handed Candy, who believes he’ll one day be discarded for being old and living out his usefulness. He finds companionship with an aging, failing dog he’s had since a pup (Labrador retriever Molly Halliburton, in fine form). David Fritts is the workers’ gruff boss, who, in his limited stage time, transmits a man of little compassion. He is to be feared, as his son — Curley, rendered by Kyle Thomas Dyck with intensity and a tight pent-up anger — is to be avoided. Curley is newly married, and Molly Denninghoff conveys his restless wife, also pent-up, with vibrant, bursting-at-the-seams life.

Steinbeck’s take on this woman is a piece of the play at odds with current sensibilities, but we’re seeing her primarily through the eyes of the migrant men. Curley’s wife is the temptress, the tramp, and all the other slurs hurled at women who don’t adhere to the boundaries society sets. But her depiction isn’t all slander, as the window given her in Act 2 reveals.

As Slim, a “jerkline skinner,” or mule team’s main driver, Brian Paulette provides a perfectly understated portrait of a quieter, kinder, wiser man — “prince of the ranch.” L. Roi Hawkins blends yearning with anger in Crooks, the sole black man, segregated in his living arrangement and in his free-time entertainments. Dalton Mobley exudes the youthful energy and animation of the young ranch hand Whit, and Scott Cordes, also the production’s fight captain, brings a restrained ferocity to the grizzled, unbending, unempathetic Carlson.

Set design by Jack Magaw captures the rustic environment of the landscape and the grounds of a ranch in California, including grasses that mark the edge of a water source (sound design by Kevin O’Donnell). Tall sliding wooden doors assemble modularly, becoming the frontispiece of outbuildings or the interior walls of the bunkhouse or barn. A vast backdrop of sky and clouds adds atmosphere and mood (lighting by Jeffrey Cady) in addition to reflecting time of day. Costumes by Maria Noel Nieto further immerse us in the period and story. And stagehands in the guise of ranch hands slickly change set and props in smoothly choreographed, seamless, even entertaining, transitions.

Every aspect of this moving and powerful production is a part of its overarching appeal — its many pieces coming and working together to keep us caught up in the pathos of its people’s daily lives.

Of Mice and Men