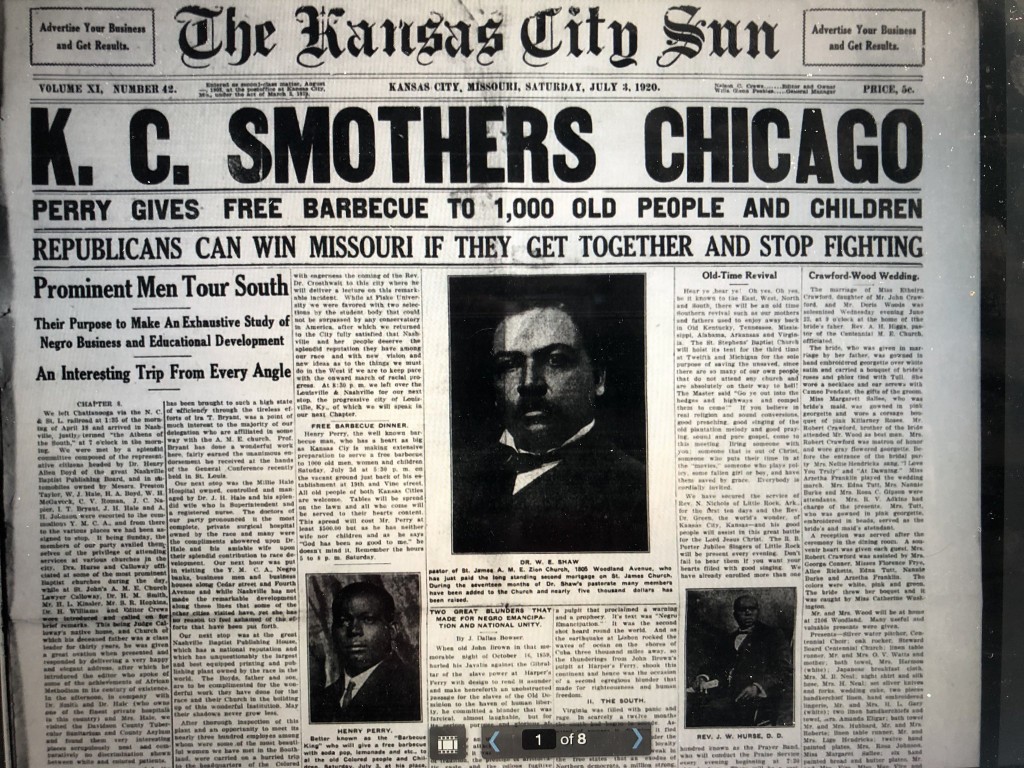 We’ve been kicking around ideas for possibly renaming a fountain and a road here in KC. For reasons.

As such, a lot of names of Kansas Citians that have made positive impacts have been bouncing around in our discussions, both internally and online. One option that we’ve been a particular fan of is Henry Perry, and if you’re unfamiliar, I think you’ll see why we’re so invested in him. 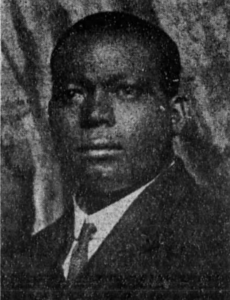 He’s the father of KC BBQ as we know it.

In 1908, Henry Perry began serving barbecued meats in downtown Kansas City. He would then go on to start his restaurant “Perry’s Barbecue” near 18th and Vine. Customers paid 25 cents for hot meat wrapped in newspaper and served with a harsh, peppery sauce. After Perry’s death in 1940, his employee Charlie Bryant inherited part of the business and in turn sold his concern to brother Arthur, who moved to a location at 1727 Brooklyn—today known as Arthur Bryant’s Barbeque. And a cook from Perry’s Barbecue, Arthur Pinkard, helped George Gates found Gates Bar-B-Q.

Henry Perry was not just a restaurateur and culinary pioneer, but also a fixture in the local community. On July 3rd, 1920, he fed 1,000 Kansas Citians for free—specifically children, women and the elderly—on the lawn next to his restaurant.

These discussions we’ve been having online about Perry and his legacy prompted interest from community leaders and organizations. And something very exciting has come from this. No, it isn’t the renaming of anything in the city (yet), but it is heartwarming and wonderful.

By order of Mayor Quinton Lucas, July 3rd is hereby designated as “Henry Perry Day”, in honor of the father of KC’s signature flavor. On the same day, the Kansas City Barbeque Society will facilitate 1,000 barbecue meals to be distributed among Kansas City nonprofits.

I think we can all agree that this absolutely rules.

“Kansas City is known for our barbeque today because of Henry Perry’s passion for the craft a century ago,” said Mayor Lucas. “I’m proud that our community is coming together to honor Mr. Perry’s memory through public service, and I hope we’ll continue honoring him in this way for years to come.”

Starting at 9 am on Friday, Kansas City Barbeque Society, in partnership with GEHA, Gates Bar-B-Q, Joe’s Kansas City Bar-B-Que, Jones Bar-B-Q, Smithfield Foods, Roma Bread and Will Gregory Public Relations, will assemble 1,000 barbecue meals. At 11 am, local nonprofits will begin picking up the meals to distribute among Kansas Citians in need.

Please note that these donations are being made directly to charities, who already have systems in place for distributing the food to those who need it. (Having 1000 people show up in one place to get meals isn’t the best idea during COVID-19.)

“Kansas City Barbeque Society is honored to host this event,” said CEO Emily Detwiler. “We’re committed to raising awareness about the origins of barbecue and believe Henry Perry’s name should be known by everyone who enjoys Kansas City-style barbecue here and around the world.”

We’ve been told that 80-year-old Ollie Gates of Gates Bar-B-Q will be in attendance for the event. An absolute KC legend honoring another KC legend. There’s nothing about this we don’t love.

Here’s hoping that rekindling the legacy of one of our metro’s food Founding Fathers will inspire Kansas Citians to pursue a little extra charity and love for each other, especially during such a difficult time. Can’t wait to unearth the next great story from our history and bring it into the present; a time where we desperately need neighbors supporting neighbors on this scale.

Here is the Mayor’s proclamation in full:

WHEREAS, Henry Perry was born March 16, 1874 near Memphis, Tennessee and subsequently moved to Kansas City in 1907; and

WHEREAS in 1908, Henry Perry began serving barbequed meats in downtown Kansas City’s Garment District from a modest alley stand. The success of which led to him eventually opening a restaurant at 19th and Highland (near 18th and Vine). His establishment, “Perry’s Barbecue,” served meats smoked over oak and hickory; and

WHEREAS after Perry’s death in 1940, his employee Charlie Bryant inherited the business and in turn sold his concern to brother Arthur, who moved to a location at 1727 Brooklyn – today as Arthur Bryant’s Barbeque; and

WHEREAS to this day, many barbeque restaurants carry on the tradition of Kansas City barbeque that began a century ago with Henry Perry and he is widely referred to as the “father of Kansas City Barbeque”; and

WHEREAS Henry Perry was not only a restaurateur and culinary pioneer, but also a philanthropist in the Kansas City community. 100 years ago (on July 3rd, 1920) he fed 1,000 Kansas Citians in need for free – specifically children, women and the elderly – on the lawn next to his restaurant; and