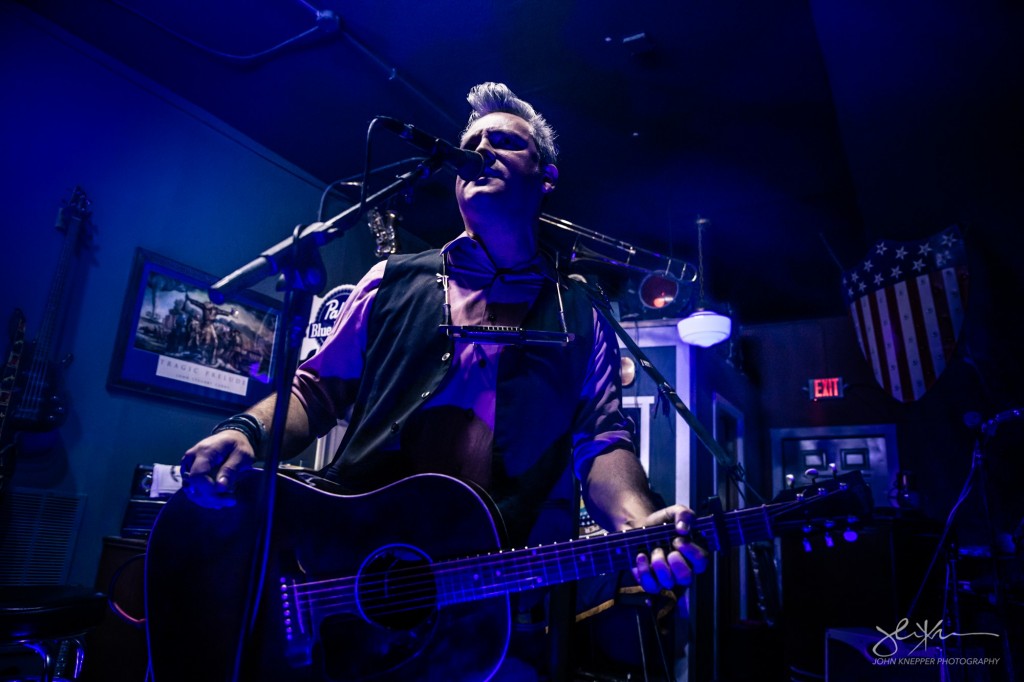 Just a month prior Douglas County’s shelter-in-place order went into effect on March 23, the Kaw Valley Public House, located at 444 Locust Street in North Lawrence, celebrated its first anniversary. In the year it had been open, the location grew from a cozy bar into a fine addition to the city’s music scene. Unfortunately, like every other bar and club in town, it made the difficult decision to shut down just days before Douglas County made the decision for them.

Like many other venues, the Kaw Pub is struggling to support its employees and the musicians who used to perform there. The venue’s owner, Jeff Groves, recently began a Kaw Valley Public House YouTube page, which features live audio recordings from shows across the venue’s history. The roots bands which are the Pub’s bread and butter are represented, from the Roseline’s country rock, the raucous bluegrass of Unfit Wives, and singer-songwriter Megan Luttrell’s introspective solo material.

We reached out to Jeff Groves via email to talk about the Kaw Valley Public House’s history, the new recording series, and what the venue is doing to survive.

The Pitch: When did the Pub open?

Jeff Groves: Kaw Valley Public House officially opened in late February of 2019. Before we occupied it, it was part of El Matador Cafe. The space had fallen out of frequent use and we were given the opportunity to develop our business by the owner of El Matador, who also owns the properties. The space itself, is in one of the oldest buildings in Lawrence and has been rumored to be the longest running continuous place of business in Lawrence.

In the late 1800’s it was first occupied by Kaw Valley Hotel, which served the Union Pacific railway station that used to sit directly across the street from us. Music has been a feature in the space for decades. The late owner of the property used to hold monthly shows in the space with his band, Little Joe and The Wisemen, and other artists. We think it’s definitely got the vibe and juju to make it an amazing venue going forward.

Was live music always planned as a facet of the bar?

Live music was always going to be a focus of our establishment. That said, I don’t think we ever anticipated it being as active as it has become. Before the shutdown, we were hosting events 4-5 times a week, and sometimes more. Feature shows, songwriter nights, open mic, karaoke, and even comedy was on the docket. We even hosted a live radio show in December. I think it was more of a case that there was enough talent and an appetite in the area for a venue like ours to feature music consistently and frequently.

What made you start recording shows?

Recording and mixing has always been a passion on mine. I have some sound engineering training from the past  so I started recording shows more of a labor of love, but wound up getting some pretty good results and kept at it. It kind of just happened naturally and I wound up with a pretty extensive catalog of shows from our first year of operations. That said, because of the live nature, not everything turns out or is feasible to capture. When the pandemic hit, and I was brainstorming about things I could do for our business, it just made sense that I start sharing of this material. I initially reached out to a few artists who were enthusiastic about the idea and it grew from there.

Your house music is from almost all local acts. How have patrons responded?

Lawrence and the surrounding area has a real passion for live, local music. The patrons have been amazing in their support, and so many of our patrons are musicians themselves. The music community in Lawrence is like I’ve never encountered, and so much more than I ever anticipated.

How do you choose what tracks you’re sharing on YouTube?

A lot of it has to do with what I had quick access to initially. Since then, I’ve been digging in to recordings that I haven’t had a chance to review for awhile. Artists have also chipped in helping with mixing some of the recordings. Brian Byers and John Knepper have been supplying me with great photos from many of the shows for some graphic content. JJ, our bar manager, has also been putting some video editing skills to use with his newfound spare time and creating some really great videos to go along with the recordings. Everybody has really come together to make this happen.

Why start sharing songs now – is it something to keep yourself busy, support the bar and artists, or a combination of the two?

It’s a combinations of all of that. I knew I had some good material, but never really knew what I would do with it. Of course, getting artist sign-off was the first step. I wasn’t going to do anything with the recordings without them signing off completely. In the past, I would play some of the recordings for house music during business hours. And then yes – when I wound up not being able to open the pub for business, I would start digging into content for some sanity. But like I say, it’s really been a team effort. I think the community feels involved and that means more to me than anything right now.

When did you decide to close, and what brought about that decision?

Initially, it was just the responsible thing to do. St. Paddy’s Day would have been one of biggest revenue days to-date. The St. Paddy’s day parade route, literally goes in-front of our front door. We had some amazing entertainment lined up, and we knew it would be bigger than last year. The decision to close before it took place was one of the hardest business decisions I’ve made, but ultimately it was made for us. There’s was no way we would be able to host that event and be safe and responsible at the same time. I don’t think anything was mandated on the date we closed, but that followed shortly there-after.

What are your plans going forward?

Weather the storm, I guess. We’re trying to access every bit of aid we can. We’re trying to keep our primary work-force on payroll and engaged. That said, these processes aren’t fast, things get held up, and not having experience with a situation like this, it really remains to be seen how it will all turn out. Again, our patrons and community have stepped up with support in all sorts of ways. Giving us some leeway on bills, supporting our virtual tip jar on GoFundme.com, and general words of encouragement. I have no doubt they will return when it’s safe… There’s just no indicators of when that will be, which is probably the part that causes us the most anxiety.

Who can we expect to hear recordings from in the coming weeks?

So many recordings to get to: I hope to release a lot more material from the monthly Women’s Songwriter Showcase hosted by Megan Luttrell. It’s an amazing event that introduces the community to so many amazing artists. I will be preparing material from Melvin Litton’s Gothic Cowboy Review, another monthly event. Sugarfoot Detour, Cat Rodeo, Sissy & Earl, and more tracks from artists that are already featured on the channel are all at top-of-mind. I can’t list them all, but I think I have enough good material to keep it interesting for a while.

You can find more info about the Kaw Valley Public House on Facebook.