Kansas Gov. Sam Brownback celebrates being stingy with health care in State of the State address 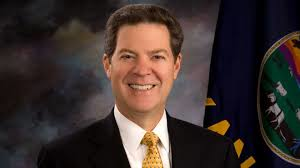 The big question in the runup to Gov. Sam Brownback’s State of the State speech Tuesday night was whether he would even address the state’s humongous budget deficit.

Well, yes, he did. He even hinted at a few measures that will be included in his budget proposal, to be unveiled on Wednesday. And that proposal, Brownback emphasized, will be balanced. In fact, he repeatedly pronounced that that word — with emphasis, as though folks in these parts had never heard it before.

“This budget is balanced,” Brownback said, as elected officials and guests sat in rapt attention in the Capitol in Topeka. “Balanced in that it reconciles spending with available revenue. Balanced in that it addresses both sides of the ledger, revenue and expenditure.”

Only in Kansas would a governor with six years in office find it necessary to define a balanced budget in such detail.

“The days of tax first, cut never, have come to an end,” Brownback declared.

Tax first? Cut never? Where has this guy been? The Kansas Legislature and Brownback’s own administration have cut and cut and cut over the past four years, as a result of disastrous tax cuts insisted on by Brownback himself.

It’s hard to imagine how the state can wring out more savings. But, fortunately, the governor has some ideas.

“Can we really ask Kansans to pay more for a government that maintains separate bureaucracies to license the practice of barbering AND cosmetology?” he asked. “Our budget will fix that.”

Whew! That will help. Brownback also signaled that the state would combine the “bureaucracies” that maintain insurance and securities markets.

But the state’s budget gap is $342 million this year and projected to exceed $1 billion at the end of the 2019 fiscal year. It’s a stretch to think that consolidating the barbering and cosmetology bureaucracies is going to be the big fix.

Brownback also spent some time exulting about Kansas’ failure to expand Medicaid or cooperate with the federal Affordable Care Act, aka Obamacare.

“As challenging as our current budget situation is, imagine if we had followed the siren song of the Affordable Care Act,” he said.

Yes, imagine. As many as 150,000 additional Kansans would have health insurance. Rural hospitals may not be looking at shutdowns and loss of jobs.

But, no matter. In light of Donald Trump’s election as president and Congress’ vow to “repeal and replace” the Affordable Care Act, Kansas’ refusal to help citizens pay for medical care “looks increasingly like declining a discount ticket on the Titanic,” Brownback said. That was one of his better lines.

The governor called on legislators to find a better way to distribute funds among schools.

“For decades, the children of Kansas suffered under an overly complicated education finance formula,” he said.

Indeed. Many a Kansas schoolkid has writhed at his or her desk, dreading a quiz on the school funding formula. Or probably not.

What Kansas schoolchildren have suffered from is chronic underfunding of schools and a refusal by the current governor and some legislators to accept that quality education is Kansas’ ticket to prosperity.

In perhaps the biggest howler of his speech, Brownback asserted that Kansas needs to address “quality of life issues.” And, apparently, it is.

“We will see the groundbreaking for a new facility in Wyandotte County to host the American Royal, an internationally significant livestock show and the world’s biggest and best barbeque competition,” he said.

Kansas is in a hole financially, schools need money and services are staggering. But, praise the lord, it soon will host a great sow exhibition and barbecue cookoff. At least Kansans can sniff the burnt ends while driving down the road to ruin.