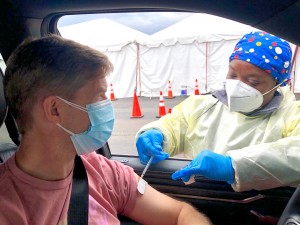 Sixty-two Kansas counties turned down their COVID-19 vaccine shipments this week because they would go to waste. Demand for the shots has declined and there are not enough unvaccinated people who want the shot.

“Up to last week, we had accepted every shipment that was allotted to us,” says Barton County Health Director Karen Winkelman. “At that point, we felt we had an adequate supply for our needs.”

Barton County is now allowing walk-in vaccine appointments with hopes people will be encouraged to receive it. If protecting yourself and others is not enough of an incentive, vaccinated people can receive a free burger at Westport Flea Market, free donuts at Krispy Kreme, and more.

“We knew we would most likely face a plateau prior to the herd immunity threshold, which depending on who you ask, is probably between 60 and 80 percent of the population,” Kriesel says. “So while I think most public health officials were anticipating we wouldn’t get to 60 percent before having to confront the hesitancy issue, it’s arriving sooner than anticipated.”

According to FOX4, officials are planning a campaign to encourage people to consider getting the vaccine. Earlier this year, people struggled to find vaccine appointments and there were not enough doses for the number of people wanting the vaccine. Now, counties are rejecting shipments due to people’s reluctance or refusal.

A spokesperson for Gov. Laura Kelly says Kansans may be delaying getting vaccinated due to a steady drop in the number of new infections, hospitalizations, and deaths in the state. As of 9:00 a.m. today, there were 493 new cases, two new deaths, and 56 new hospitalizations reported since Friday.

Kansas has administered at least one shot to approximately 40% of its population. It is estimated Kansas is about halfway to herd immunity but there is still a long way to go before herd immunity would be in place.