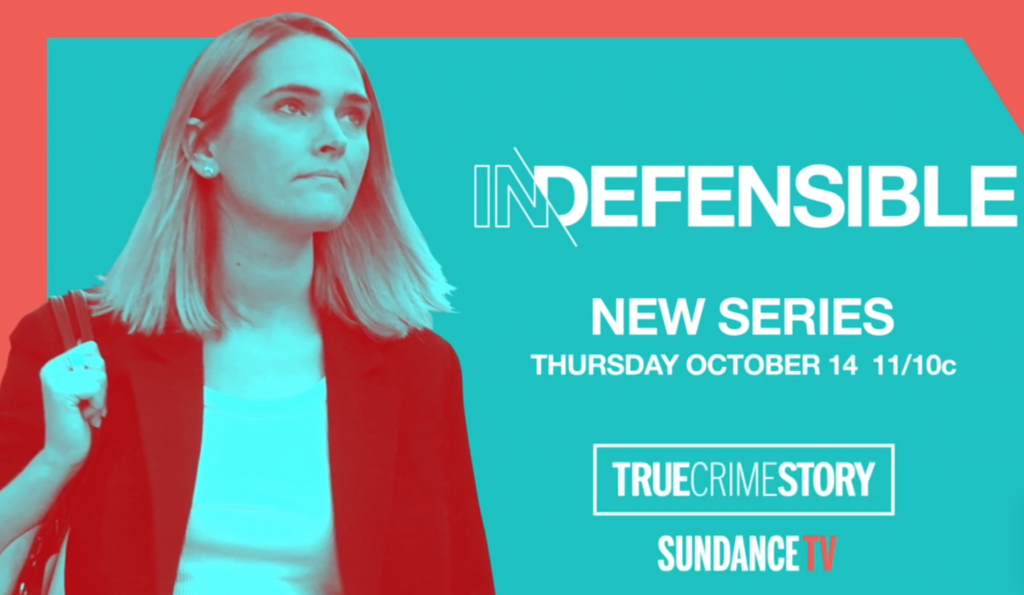 I find the ethics of podcasty true crime to be murky at best. Yet I devour it constantly. I find comedian Jena Friedman to be one of the most brutal comedians working today. Yet she’s an even better journalist.

Mix ’em together and what have you got? True Crime Story: Indefensible.

Friedman is a name you may know from her work on The Daily Show or Borat 2. If you’re into cuts deeper than her stand-up career, you may have caught her two-season run of Soft Focus on Adult Swim—an interview show where she did one-on-ones with men like the infamous “Cannibal Cop” and eccentric (lunatic) John McAfee—playing them like a cat with a string.

Her newest show is for SundanceTV/AMC+ and the first few episodes are already available. What kind of show is it? True crime from someone who equally hates/loves true crime—and is goddamned angry about how easily men can walk away from an obvious murder.

True Crime Story: Indefensible channels Friedman’s otherworldly blend of comedy journalism towards unexpected targets. Unlike many overly-popular podcasts, Friedman isn’t recapping a Wikipedia page, nor is she trying to focus on the motivations of a killer.

Rather, she trains her crosshairs on the people behind the scenes that no one ever thinks twice about. The woman on the parole board paid $100 a day, with no training, who let the killer go free so he could kill again. The “expert witness” that says whatever he was paid to say. The lawyer who successfully deployed the “Gay Panic Defense” to help the murderer walk.

By matching up against those cogs in the systemic failure—who often have no media training, as the main characters probably possess—Friedman’s finely honed approach becomes like shooting fish in a barrel. It’s a unique approach the yields difficult, jaw-dropping results. Because given enough rope, everyone here finds a way to hang themselves. Or, more specifically, accidentally blurt out a truth about themselves (or the system) that’s darker than you could prepare for.

Instead of making the traditional murderporn one would expect at this point from major media, Friedman transcends the genre by calling attention to the huge glitches in our criminal justice system.

This is a show that makes you whisper “Fuck” under your breath, and the tone is either comedic or grim or some horrific blend of the two.

Here is our interview with Friedman about the weightiest satire you need to see this year.

The Pitch: I’m here today to talk about True Crime Story: Indefensible. My first question is, how much of your Northwestern anthropology degree did you use in this?

Jena Friedman: I studied anthropology because I didn’t have the discipline to take those economics classes. All the stuff that I do has an element of observing people in pursuit of a bigger idea.

What was the inciting incident for starting this project?

I did a set on Conan’s show where I was pulling apart true crime and our obsession with it. AMC Sundance saw it, and called me—this was before COVID—and asked if I wanted to do a true crime show. I wasn’t sure it was possible based on, you know, what I think about true crime. Then we were in COVID-19 and we shot a pilot presentation where I interviewed Dr. Martin Blender. And after that interview, I saw there was a way to cover these stories—not through comedy but rather a looser form for journalism.

I think you have a particular brand of journalism that’s, not exactly looser, but more aggressive. But you trick people because you seem like you’re being sincere, or having fun, when you’re actually pressing them harder than they’ve been pressed in other interviews. In episode three, someone straight-up asks you to stop using your hands so much when you speak, but across your career, I think we can see people in your interviews starting to mimic that same energy. They try to match you, and that’s a nifty trick.

Yeah, they do, don’t they? The hand thing, that was Mark Noujaim. All the episodes are tragic in different ways, but because I think that case originally is just so absurd, it was tricky to figure out how not to fall into puns and stuff. Our culture is so obsessed with dicks.  There was so much media attention on the dick stuff [around the Ashley Soley-Cerro murder trial]. For Ashley and her family to have to go through that on top of everything else just seems so traumatizing and awful. I was trying to tell her story in a way that typical media would not, and instead Mark was just fixated on my hands. It was so frustrating.

I tried to add some levity at points because when you’re dealing with real tragedies and real people, it’s just so hard. Episode five has a family [of the victim] and they were so cute with how we were joking, that I started crying. I’m not trained to do this. So I’d brought a paper cut-out of my face continuing to look serious, just in case I started crying, so I wouldn’t be doing it on camera. There’s this moment in the interview that’s sad but poignant because the cut-out made them laugh, despite how much loss they experienced. And for some episodes of the show, there’s simply no levity at all. 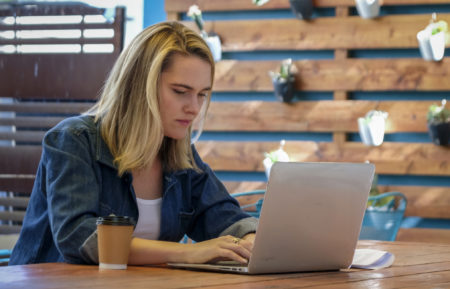 How did you choose which cases to take up for season one? It’s not like you lack for material about injustice… the episode about the history of the gay panic defense included you interviewing a queer Black woman who wants that defense to remain legal—and that just floored me. Not like the rest of your episodes don’t feature ‘professionals’ that have outlandish belief systems.

That was an incredible moment with her. She was willing to come onto the show and talk honestly about why she believed that. I really studied up for that interview, because I know that she’s a professional and it’s such a wonky topic to accurately articulate. It’s easy to find a white guy lawyer that would defend it because there are plenty of homophobic white guy lawyers. What feels compelling to me was how she sincerely believed in this continuing to exist as a right to defense. This is the kind of interview I seek out, where you don’t have to make it funny? You just have to tell the story. And that’s wild enough. It highlights how the injustices in our system keep happening, from people who believe fully in what they’re advocating.

You sit down with a woman who sits on a parole board for $100 per day. She represents many people who sit on parole boards with no formal training. And before you even confront her about the situation created, her voice is already trembling. Beyond this interview and its implications being so brutal, I feel like this is the only time I’ve seen you start an interview where your subject realizes instantly “Oh no, I should not have said yes to this!”

There’s so much talk, and rightfully so, about the wrongfully convicted in our prison system being this sprawling problem on so many levels. But what do you do about violent people that are incapable of being rehabilitated? Society trying to figure out how to keep people safe makes mistakes all over the place. Making a show that tackles bigger things means not always knowing the answer from when you start, and that’s what makes this interesting. Sometimes when you say very serious things in a way that sounds funny, people listen?

True Crime Story: Indefensible is airing weekly now on AMC+/SundanceTV and streaming through several services. We highly recommend it.