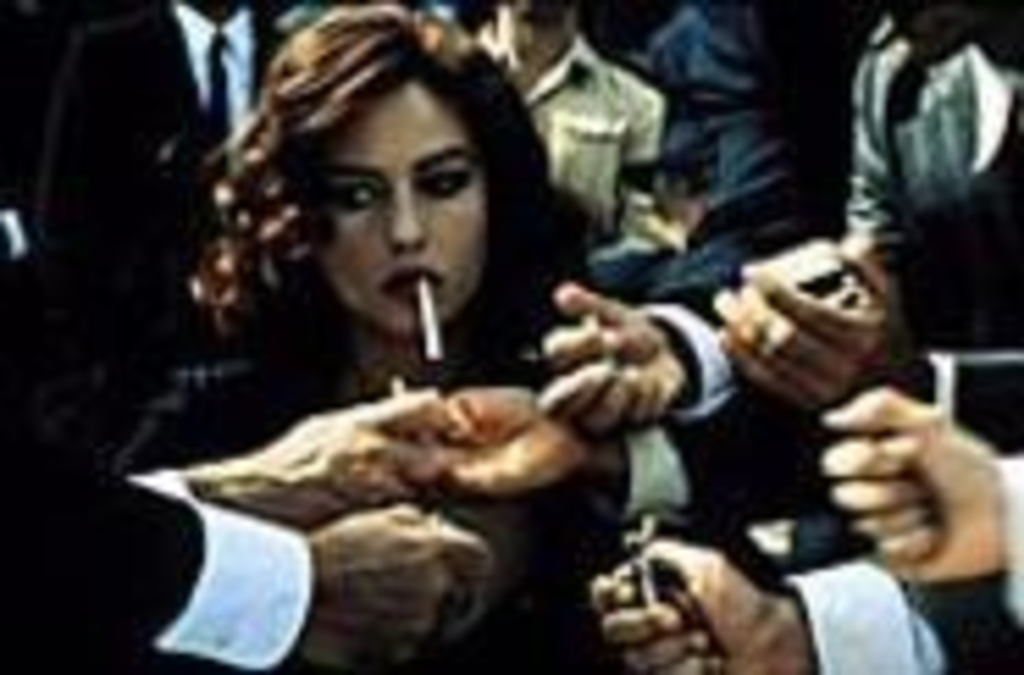 Watching this film is like watching a donkey being beaten for ninety minutes, so egregiously is the titular character treated and so powerless does she appear against her offenders. That the abuse is treated in a comedic fashion for a good part of the film makes it even more reproachable. Perhaps it’s simply a matter of cultural differences. Italian filmmakers have a tendency to celebrate the grotesque — or, more charitably, to see beauty in the grotesque; think of Fellini and Wertmuller — as well as to laugh at situations others might find distasteful. Thus, Malèna is probably intended as a bittersweet coming-of-age comic drama. But there is nothing sweet — and very little humorous — about the film.

Malèna, which is in Italian with English subtitles, proves especially disappointing because it was written and directed by Giuseppe Tornatore, who is best known in this country for Cinema Paradiso (winner of the 1990 Academy Award for Best Foreign-Language Film) and who last year released the stunning The Legend of 1900. Adapted from a short story by Luciano Vincenzoni, Malèna is filtered through the memory of 13-year-old Renato Amoroso (newcomer Giuseppe Sulfaro), who narrates the tale many years after the events depicted.

The story takes place in the early 1940s and centers on an alluring young Italian bride Malèna (Monica Bellucci), whose husband is off fighting in World War II. Not having grown up in the village, the beautiful Malèna is an unknown quantity to her new neighbors, yet no one reaches out to befriend her. All they can see is her extraordinary physical attractiveness, which they envy, resent and desire all at once. Wherever she goes, hordes of young boys on bicycles follow, staring at her and making rude remarks to one another about what they would like to do to her. The men of the village are even worse, as they openly leer at her and make propositions.

While her beauty arouses lust in the male population of the village, it brings out extraordinary jealousy and hatred in the women, who all but spit in her face and spread false rumors about her allegedly promiscuous behavior. The passive Malèna never responds. The ultimate victim, she takes the abuse, never once trying to defend herself.

Swept away by love/lust for the first time, Renato dogs Malèna’s every step but never dares speak to her — or to stand up for her at the many junctures when she needs it. Totally obsessed as he is, the adolescent cannot see the terrible impact the town’s behavior is having, both on Malèna and on the villagers themselves. At least Renato is a mere boy; the older villagers have no excuse for their behavior.

As events progress, the story does become darker and, to his credit, Tornatore does not whitewash what happens to this woman everyone in town loves to hate. But the seriousness he allows her is too little, too late — and in the end he reverts to comedy. It is difficult to see any humor or lightness in the story of a woman who is subjected to such abuse. Equally unpleasant is the fact that she remains so passive throughout the film. Granted, it is a different period of history, and she has no one around to stand up for her, but her acquiescence is troubling.

A former model, Bellucci has the right cool looks and dispassionate facade (masking what we can only assume is Malèna’s terrible discomfort) to carry off the role. We never get a sense of her personality, but that is precisely the point. None of the villagers cares whether she is an intelligent, friendly or funny individual; they want only to gaze at her beauty — and then to destroy it. Sulfaro does a convincing job in his first acting role, nicely conveying the confusion of a besotted adolescent.

The problem with the film is not the actors but the misplaced comedy, some of it having nothing to do with the character of Malèna. For example, Tornatore finds it humorous when Renato’s father, frustrated by his son’s obsessive behavior (and frequent masturbatory indulgences), slaps him around — and then turns on his daughter when she tries to defend her brother. We are supposed to see the father as a buffoon, but his actions are disturbing, not funny. The larger issue presented in the film — that of a society that must destroy the very thing it elevates and exalts — is equally disturbing, and while that may be the message of Tornatore’s tale, he has found a wholly unsatisfactory way of expounding it.