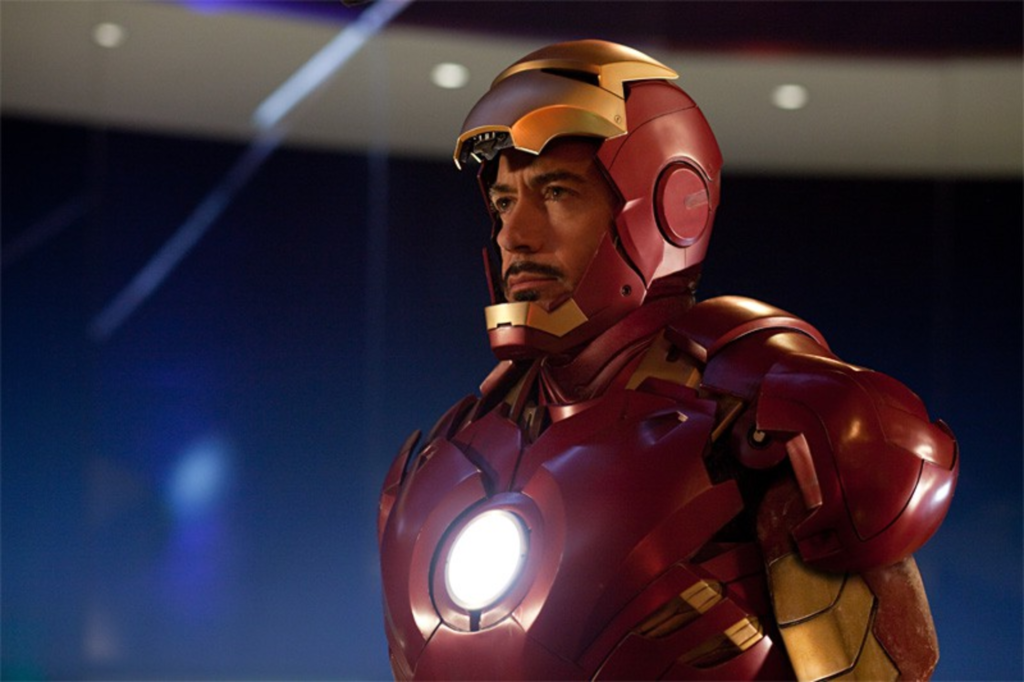 Stark is garishly “out” as Iron Man, performing a one-man air show before touching down to host his Stark Expo, which transforms the World’s Fairground at Flushing Meadows Park into Atlantic City, where he performs in front of backup dancers and a plasma stars-and-stripes reminiscent of Miley Cyrus’ “Party in the USA” video. Tony works the crowd just as he does the U.S. Congress — at a Senate hearing called to question his withholding of Iron Man technology from the military, Tony blows out on a crisp sound bite: “I have successfully privatized world peace.”

The Iron Man conglomerate will have to overcome its undeniably murky sequel, while Tony has to deal with the murderous envy created by conspicuous success. Enter Ivan Vanko (Mickey Rourke), a rogue Russian physicist introduced in Dostoevskian squalor, blue with prison tattoos. A lifelong grudge against the Stark family inspires him to weld together his own knockoff suit and become an Underground Iron Man, equipped with live-wire bullwhips. He’ll find a sponsor in CEO Justin Hammer (Sam Rockwell), a Tony Stark imitator missing the crucial mojo and whose Hammer Industries consistently finishes second to Stark.

Sam Jackson’s Agent Nick Fury shows up to eat up more time in a sub-subplot. The idea is that we learn to trust that any extraneous-seeming thread will connect to something in another couple of summers and pay off, assuming the movie does. An army of True Believers, who’d line up if Marvel Studios offered movies by subscription service, are pretty good collateral.

The elements that made the first Iron Man a rather likable blockbuster have not entirely evaporated. Favreau brings together interesting American movie stars and lets them actually play through scenes (even though Rourke and Rockwell play theirs together as if in two different — both interesting — movies). Robert Downey Jr. gives his glibness a vulnerable twitch; his out-of-control drunk bust-up at his birthday party, while wearing his heavy-­ordinance suit, suggests a more dangerous, more interesting sequel. Stark still compulsively slips wisecracks under and between everyone else’s lines, bedeviling aide-de-camp “Pepper” Potts (Gwyneth Paltrow). The stealthy delivery forgives the fact that a lot of Tony’s quips are lame puns. Pepper: “What, are you going to Google her now?” Tony: “I thought I was ogling her.” This is referring to Scarlett Johansson, here as “Natalie Rushman,” a Stark Industries lawyer who may not be what she seems, looking fresh off a 1945 Photoplay cover, with wavy auburn tresses and dresses whose engineering is more awe-inducing than any of the gadgetry.

Natalie later breaks out a cat suit and commands the movie’s most legible action scene, neutralizing about a dozen security guards in creative fashion as she sashays down a corridor. As for the actual grand finale, Downey and Cheadle seem like they’re already gaming the PS3 release instead of facing any actual threat, and Rourke goes out like a chump.